I still have pleasant memories and frightening nightmares about the original KFC Double Down. It was a monstrosity of a “sandwich.” I had to put the word sandwich in quotes because I’m not particularly sure it meets the criteria of what a sandwich should be. After all, the original Double Down consisted bacon and cheese placed in between two chicken fillets and no bread. I do have mixed feeling about it as it was pretty good when you start eating it but gets boring quickly as you continue biting into it.

Apparently, KFC felt we needed more variety regarding the concept here in the Philippines. Ladies and gentlemen, may I introduce the successor to the Double Down: KFC’s Double Down Dog. 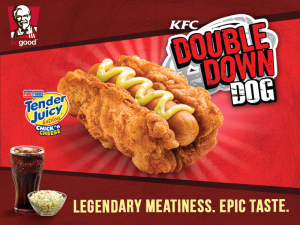 But the hot dog isn’t your ordinary hot dog. It’s actually a hot dog made out of chicken and stuffed with cheese. Oh, and it’s topped with some… I’m actually not sure what it is! I think it’s some kind of Hollandaise sauce but don’t quote me on that!  I honestly tried researching what it is on the Internet and I just couldn’t find the answer! I even went to the official KFC Philippines website and the Double Down Dog isn’t even listed there!

That didn’t stop me from actually trying it out. I was still incredibly curious about this abnormal combination. I managed to get my hands of one and, as expected, it didn’t look like anything from the promotional shots!

But I do have to say that it’s difficult to eat! I was kind of pissed that the Double Down Dog came in a box and wrapped in paper as it made it very difficult to get a decent picture of the thing and a bother to eat as they got in the way of easy consuming. But, apparently, there’s a reason why it comes in a box: it’s to keep everything contained! I made the mistake of removing it from the box. Around my third bite the hot dog slipped out from between the chicken fillet! Luckily, the hot dog landed in the box so I was able to put it back on top of the fillet and continue eating.

Besides the trouble of actually eating it, I would have to say the Double Down Dog is pretty good. In fact, I would even go as far as to say it’s one of KFC’s better ideas in a long time! Sure it’s probably one of the most unhealthy things on the menu but I don’t go to KFC for the food’s nutritional value. If they’re going to make artery busting delicacies, might as well go all the way, right?

Would I order the Double Down Dog again? Actually, I already did! The next day, I went out of my way to find my nearest KFC and get another Double Down Dog. It was that good! The idea of eating a hot dog and chicken fillet at the same time may seem disgusting but… don’t knock it til you try it!

Have you tried the Double Down Dog? What did you think of it? Let me know in the comments section below!