A couple of days ago, I wrote about my bad experience with Jinri Park’s “meet and greet” at Ozine Fest. After that, I was feeling a little bummed out since I was extremely disappointed. I walked around the event floor for a while when I notice a small crowd of people surrounding one of the cosplayers. Yes, the girl was in costume but she had an ulterior motive to dressing up. She was selling her own self-published album! 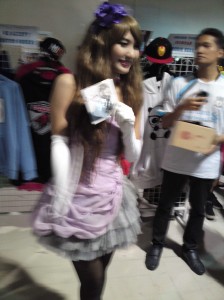 I was hit from behind just when I took this picture. That’s why it’s blurry. Stupid guy!

It turns out that the person was Mayumi Gomez, who’s a popular cosplayer, model and aspiring singer. She was kind of hidden from the main floor but, I have to admit, she was doing a good job in attracting attention. Mayumi will pose for pictures with people that want her picture (just like any good cosplayer). But, if you buy her CD (costs P200), she’ll give you a poster of her, as well as a button. Oh, and she’ll sign all three of them!

Honestly, that’s a great way to promote a self-published album, especially in a manga and anime convention! This is how it’s done in Japan. The Idol will go tour the country and give fans a chance to pose with them and sign stuff and it was great. Give a personal touch and make each customer feel a connection!

That’s me! With her!

But the reason why you buy the album is to actually listen to the songs, right? Mayumi: The First Mini Album has a total of six tracks, but there are only three original songs. The songs are Mayday!, Habulan and Shooting Star; the other three songs are actually acoustic versions of the originals. 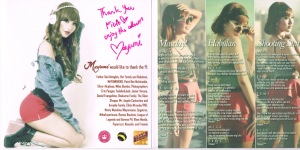 At least she got my name right when she signed the CD.

The first song, Mayday!, is… okay. You know that feeling when an anime gets dubbed into English and there’s just something wrong with how it sounds. Oh, the translation is accurate and the dialog fits perfectly to the mouth movements. But there’s that nagging feeling that something’s off. That’s how I felt initially. I have to say that it does grow on you. Either that or maybe I just got used to it.

The second song, Habulan, starts off pretty strong with a quick beat. It sets the tone of the rest of the song. This was better than Mayday! in my opinion. Mayumi’s voice really suited the overall tone and just worked well. It also sounded much more like a J-Pop song, which was what I was expecting when I got the album.

The last song, Shooting Star, is actually my pick from the three. This has the most catchy (catchiest?) song from the other songs. I think it was the refrain that sold me with this song. It doesn’t sound like a J-Pop song. Rather, it’s more like a traditional pop song… a good pop song!

Here’s the cover of the album as well.

One thing I actually like about the songs was that they did not sound like each other. Each of the three were different and distinct from each other. Unfortunately, this is also probably the reason why I didn’t like Mayday! that much. The three songs were short and sweet as none of them goes over the 4 minute mark. The acoustic versions were good. They didn’t sound like filler (which I though they would be). If you play acoustic guitar, the chords for the songs are on the album as well.

I do appreciate the steps Mayumi did to promote her album: signing stuff, coming in costume, giving freebies, etc. But all of that wouldn’t matter if the album wasn’t good. Thankfully, I did enjoy two of the three original songs. I also liked the acoustic versions of the two songs that I liked. So I guess I like four songs on the album? The freebies and the experience of buying the album directly from her just made it a much more enjoyable experience.

That’s me! With her!

If you’re a fan of Mayumi, I guess this is a no-brainer. Me? I didn’t really know her prior to this, but this made me sort of look forward to her other stuff. Heck, I’ll even promote the fact that she’s in a Nescafe commercial now (with Parokya ni Edgar and Ramon Bautista) that you can see on YouTube, which is below.

If you have any comments or suggestions on what else can be reviewed, please leave them below!