Last year, we got Robocop and Teenage Mutant Ninja Turtles. This year, we’re getting the Fantastic Four, Terminator: Genisys, and Poltergeist. And there’s still the upcoming all-female Ghostbusters movie as well as the “reinvention” of The Crow. With all of these reboots and remakes popping up all over the place, it may seem like Hollywood has run out of ideas. Whether this is true or not is up to you. But for most fans, they feel these reboots and remakes are destroying their favorite franchises.

I, for one, agree most people producing these remakes and reboots don’t seem to have the faintest idea as to why these franchises are popular and this makes the resultant product look like crap. But I do like to address the other thing that fans say. They say that these reboots/remakes are ruining their childhood. I think that’s carrying it too far. No matter how bad they may be, they aren’t going to be destroying your childhood.

Which is better? (Hint: it’s the one on the left)

I realized this fairly recently as I was one of the people I mentioned above. I felt that all of these remakes and reboots were not only totally unnecessary, but they were also ruining my fondness for them! For me, they were a blight to a happier and simpler time of my life. I grew up watching really awesome cartoons like Transformers and GI Joe. While I never the biggest fan of Teenage Mutant Ninja Turtles, I sort of knew why they caught on.

Then they started to announce live-action films based on these cartoons. I was initially excited, especially for Transformers. I was honestly thinking Michael Bay was going to do a fantastic job with Transformers. After all, I did enjoy some of his previous films, most notably Bad Boys and The Rock. I even enjoyed Armageddon for its cheesy factor.

And, when the first Transformers film came out, I have to say I came out of the theater satisfied. It was a fun movie… But there was something wrong. It didn’t feel like the cartoon from the 80’s that I loved so much. I mean, I wasn’t expecting them to copy the original cartoon exactly but it was so radically different from the Transformers animated series. They focused too much on the humans rather than the robots. Michael Bay probably didn’t understand a fundamental aspect of why the Transformers has a huge fanbase.

Then GI Joe was revealed to be getting the live action treatment. And even from the trailer, it was obvious the producers had no knowledge about the product again. Cobra Commander and Destro looked nothing like their animated counterparts. And they plastered their “accelerator suits” so prominently in the trailer, it was like they were taunting us to spew hate for it before it was even released.

Needless to say, GI Joe: The Rise of Cobra was an awful stinker. I’m not sure why they thought it would make a good GI Joe movie but, my theory is the movie studios had this script lying around and just couldn’t film it because they knew it was a mess. But, when they snapped up the GI Joe license, they just decided to plug in the property into the script. Not sure if this is true but that’s the only logical reason I can think of!

And they just kept on trying! They remade Clash of the Titans and the Karate Kid in 2010, Arthur and Conan the Barbarian in 2011, Red Dawn and Total Recall in 2012, Carrie and Evil Dead in 2013 and, last year, we got Robocop and Godzilla. While the quality varies radically between them, none of them have managed to capture the magical quality the originals had. 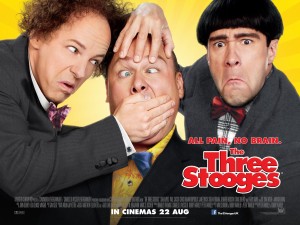 The less we talk about this, the better.

But, I realized recently these films are not trying to replace these films/cartoons/television series. They’re trying to recapture the magic in the bottle but are just plain unable to do so. They’re also just trying to make a quick buck by capitalizing on the popularity of these popular products. They are not out to destroy the old stuff. In fact, they’re trying to exploit our nostalgic love for them!

And besides, unlike George Lucas, Hollywood is not actively trying to erase the older stuff. We can still get DVDs and download our favorite original properties. They are not being taken off the shelves. The new stuff are just alternatives… which we don’t have to watch!

So, while I do agree that the remakes and reboots usually don’t compare well with the original properties, they are not ruining our childhood. Our inner child will still have fond nostalgic memories and remember the great times we had with our favorite movies and TV shows. And besides, Hollywood may get it right… someday.

What’s your take on remakes and reboots? Let me know in the comments section below.