I’ve written before how much I used to love watching various anime. It was something I really enjoyed doing but, for one reason or another, I just stopped. Maybe I’ve gotten too old for the medium or I just had my fill and wanted to try out some different things or I just found a new passion. Whatever the case, I just stopped watching anime.

So, when one of my friends brought over an anime DVD, I was kind of skeptical that I would like it. Even though she raved about it and how great it was and critics just loved the heck out of it, I was still doubtful I would like it. So, I popped it in and saw the entire thing.

Boy, was I wrong! Spirited Away is a fantastic film and I’m glad I watched it.

Spirited Away is the story of Chihiro who is moving to a new town. She and her family get sidetracked and enter a seemingly normal fairground. Chihiro’s parents start pigging out on food left out while the little girl explores the area. When she runs across an huge bathhouse, a boy named Haku yells at her to leave the area before sunset. Unfortunately, she meets up at her parents too late as they have been turned into pigs. It turns out Chihiro and her family stumbled upon the land of spirits and now, the girl has to work at the magical bathhouse and find a way to free her parents from the spell.

I’m not sure how well I’m describing the story and I honestly feel I’m not giving the story justice. But Spirited Away is a fantastic tale! The setup seems super simple but it’s how the story is told. Chihiro encounters lots of compelling characters during her adventure in the spirit world. They’re designed in such vivid and interesting ways; even plain ol’ Chihiro’s look is unique as well! 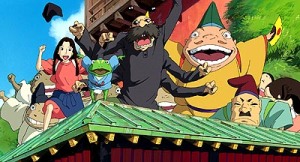 If they’ve made other animes that are animated as brilliantly as Spirited Away, I know I’ll be blown away again! There are a lot of nice little touches that you don’t see in other animated films; in one scene that amazed me, Chihiro slipped while trying to find a secret entrance to the bathhouse. Making her slip was totally unnecessary but, when she did, it caught my attention and made a simple scene much better because it was so unexpected and added a lot of personality and charm to the overall experience.

While I do enjoy Spirited Away, I did see some things that other viewers may not like about the film. The main “antagonist” Yubaba isn’t that interesting of a baddie. She’s very… basic. That was fine with me but viewers expecting a more enigmatic villain will be disappointed.

Also, there’s this really, really slow part during the latter half of the film. Nothing actually happens at this part of the anime but they do get to show a lot of impressive visuals. I just think it dragged on a bit too long and, if they edited this scene and shaved off a few minutes during this part, I don’t think anyone would mind.

Spirited Away’s overall story may be confusing to a lot of people as they throw in a lot of magical elements and probably some Japanese cultural factoids that Western audiences may not be familiar with. They do give brief explanations, such as Chihiro being renamed Sen by Yubaba and, if she forgets her real name, she won’t be able to leave the spirit world. Why? Because they said so! It was okay with me as I just went with the flow but others who would want a deeper explanation may want a more complex explanation (which the anime won’t give).

I would say Spirited Away is more of an experience rather than an anime telling a great story. Everything is done really beautifully and the animation moves so smoothly. I may not have really wrapped my head around the story too well but I enjoyed my time with Chihiro and the rest of the colorful characters. And, really, isn’t the purpose of watching a movie is to enjoy oneself?

Have you seen Spirited Away? What’s your take on the movie? Let me know in the comments section below!

3 thoughts on “I’ll Review Anything: Spirited Away”