Last time I wrote about my favorite supporting characters in media, which got me thinking of Kuwabara, one of the guys from Yu Yu Hakusho, an anime series. I used to be an avid anime viewer but, now, not so much. It got me thinking “Why don’t I watch anime anymore?” Well, hopefully, I’ll figure that out as I’m writing this!

Here’s a great pic of the men in my (previous) life.

So, the anime that got me interested in anime was the previously mentioned Yu Yu Hakusho. I’m a little ashamed to admit it but I actually liked the dubbed version. And I mean the version that was shown on local TV! So it wasn’t even dubbed in English! They also messed up the names to make them more palatable for local audiences. Yusuke became Eugene. Hiei was renamed Vincent. Yes, they were all pretty simple names but, honestly, I liked them since it made them easy to remember.

This also came with some pitfalls when you change the names of characters… especially if you don’t have anyone familiar with the animes you’re dubbing! The best (or worst) example would be Genkai, Yusuke’s master. In the original version, Genkai was a old woman renown for her skills in controlling ki. In the version shown here, it was pretty much the same… except they made him a guy! They even renamed him/her Jerimiah!

Looking back, I guess the biggest reason why I became so enamored with anime was because they were different from the usual animated programs that are meant for kids. In a regular cartoon, each story can be resolved in one episode. Not with anime! Some story arcs can take several episodes to complete.

Also, the stories in anime can be pretty complex and tackle some pretty serious topics. One of my favorite animes to watch when we still had Animax was Ghost In The Shell. The basic premise is a typical sci-fi storyline on the surface: cyborg Mokoto Kusanagi is in command of a highly skilled squad of police officers called Public Security Section 9. But, like I said, there’s more to it than that.

Her “uniform” doesn’t have a place for a badge, though.

The first season of the show deals with a huge overarching story dealing with a corporate terrorist only know as The Laughing Man. Although it appeared The Laughing Man committed numerous crimes, it’s revealed by the end he only did the first crime (the kidnapping of a corporate president) and all subsequent attacks after than were perpetrated by copycats.

Not only that, the anime deals with philosophical ideas, such as what constitutes as a soul (the “Ghost” in the title). Public Security Section 9 has an army of robotic spider-like tanks called Tachikomas. Even though they have rudimentary AIs, all of the Tachikomas appear to have different personalities from each other. So, even though they were manufactured in the same way (with all the same parts and stuff), they all act differently, like they each have a soul. 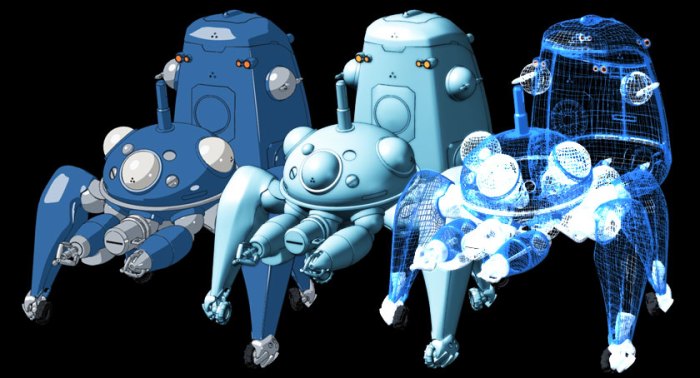 I can’t really think of a reason why I stopped watching anime. I mean, I really enjoyed watching them so much and I can’t for the life of me imagine why I don’t do it anymore. I guess life sort of got in the way. I became busy with schooling, going out with friends, actually going on dates, preparing for college and much more and anime just fell by the wayside.

Well, if there’s a good anime (and nothing too long like Naruto… that’s a lot of episodes to catch up with!), I hope someone can suggest them! Who knows? Maybe I can find the time in my schedule to actually watch some of them again!

Speaking of which, maybe I should write about the (geeky) TV shows I love to watch! And I’ll do that next time!

Have any good anime suggestions? Please leave them in the comments section below!

4 thoughts on “Episode 25: Breaking Up With My Love For Anime”