Leave it to Marvel to do something totally out of this world to make it known to the world that Guardians of the Galaxy Vol. 2 is going to be made available to the home market.

A couple of days ago, my Facebook page was being plastered with people sharing a video called Guardians’ Inferno and wondering in amazement how it was made. They’re wondering what’s with this late ’70s/early ’80s goofball song and music video. Well, I guess a lot of people still leave during the end credits of a Marvel movie because they would’ve realized that the song was actually played during the ending credits of the film. Either that or people just don’t pay attention to them until they show the end credits scenes. Whatever the case, they do know about the song now thanks to this “new” music video by director James Gunn and most of the Guardians of the Galaxy cast. It’s certainly eye catching thanks to its retro look and sound. But let’s go delve a little deeper into Guardians’ Inferno and see why many people have become enamored by it.

The first think you’ll obviously notice is Guardians’ Inferno’s deliberate retro style. The entire package is definitely a love letter to the cheesiness of a bygone era. There’s a definite disco vibe to the tune which harkens back to a time when the genre ruled the airwaves and the streets. The sound is just unmistakable and, even when I heard it during the end credits of Guardians of the Galaxy Vol. 2, it simply stood out among all of the other rather melodic tunes of the film’s soundtrack.

But the thing that really caught people’s attention was the visuals. Marvel and James Gunn really went all out to copy the funky style for the video as it’s a perfect homage to the wonderful weirdness of the ’70s and ’80s. From the ultra bombastic space jumpsuits for the dancers, the extremely funky dance moves to the really hippy like attitude of everyone involved, Guardians’ Inferno simply captures the weird aura of the time period. Most people will leave it at that and conclude that it’s just a funky and fun way to promote the home release of Guardians of the Galaxy Vol. 2. However, there’s a little more to it than just that because it’s kind of like a mini-Marvel film as it has a lot of Easter Eggs… as long as you’re just a tiny bit observant.

I actually didn’t realize the video had these cute little gags until I got into the halfway mark. It’s at around this time you see a suspiciously buff dude who I’m assuming is the guitar player of The Sneepers, the group that is credited for making the song. But I don’t think that dude is fooling anyone with that greasy curly hair, groovy sideburns and mustache and far out sunglasses! The dude is obviously Batista, the same guy who plays Drax the Destroyer in the film! 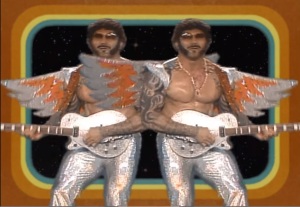 Forgot to mention the awesome wings.

After I noticed Batista, I realized that, if he was in the video, it’s safe to assume that the rest of the Guardians were in the film as well! And sure enough, most of them were there! I’m guessing more eagle eyed viewers figured this out early in the video so shame on me for having to wait for Batista for me to realize this. But I’m guessing there were some of them that only thought of this when Chris Pratt took off that robot head to reveal that he was in the video all this time. It was actually incredibly fun to go try and guess who’s who. Even James Gunn got into the act as he was the guy playing the drums all the time. Oh, and I gotta mention that Stan Lee also makes an appearance. It is a tinge disappointing that Vin Diesel and Bradley Cooper, who do the voices of Groot and Rocket, respectively, didn’t make the proceedings. Then again, would it have made sense if they did, especially since you don’t actually see them in the movie?

But the biggest “star” has to be David Hasslehoff, who actually sings Guardians’ Inferno. It may seem odd that David Hasslehoff is in the video and wondering why he would agree to sing here. But, hey, it’s obvious that The Hoff has a great sense of humor about himself. I mean, the man actually has a music career during the late ’80s and he was incredibly popular in Europe. So much so that Germany just had to have him sing when they brought down the Berlin Wall! And, besides, it’s not like David Hasslehoff hasn’t sang any ’80s inspired songs lately. True Survivor from Kung Fury, anyone?

Actually, the thing I liked the most about the actual video aren’t the cameos of the Guardians of the Galaxy as The Sneepers. What I really loved about Guardians’ Inferno was the insane level of detail they put into making it look like something from the past! The set just oozed cheesy disco with all those bright, garish colors and background art. The special effects had that real low-res, blue screen effect that made it look fake and realistic at the same time. They even used a filter that simulated the look of vintage dance shows like Solid Gold and Dance Fever. A nice little detail were those black bars at the sides of the screen to make it look like it was filmed in a 4:3 aspect ratio. Now that’s attention to detail!

The dancing pretty much seals the deal. All of the dancers are just over the top with incredibly silly and flashy moves which was a standard for the time. The really simple ones were generally performed by the cast. You got that weird finger pointing move and that one where you spin your arms around like a wheel or something. But the really complex moves where thankfully performed by the actual dancers. I actually noticed one move in particular that paid homage to Baby Groot. I wonder if I’m the only one? It’s like an Easter Egg for the movie in a sense.

I knew that pose looked familiar!

Because of how well the visual aesthetics were produced, the video overpowers the actual song. Hasslehoff’s vocals weren’t supposed to be the main star, after all. It was more of the disco vibe that was supposed to take center stage anyway. It’s a fun song and really well produced but I don’t think I’ll be remembering it in a week or so. The song itself isn’t exactly memorable but still incredibly familiar if you watched the actual movie. That’s because the main tune is a remix of the Guardians of the Galaxy theme song. It’s not particularly subtle but I do have to give kudos to whoever repackaged the main theme into a disco beat.

It’s easy to see why Guardians’ Inferno became a huge viral hit. The thing just was just stylish and weird enough that it was bound to grab your attention, Even if it wasn’t linked to Guardians of the Galaxy, this was bound to become a hit. Is it going to be remembered in the long run? Probably not. But Guardians’ Inferno doesn’t have to be. All it needed to do was to inform everyone that the movie was going to be released on home video. And, baby, they definitely did just that.

What did you think of Guardians’ Inferno? Let me know in the comments section below!