I’ve been a fan of the WWE for a long time now which is why I decided to subscribe to the WWE Network. I jumped in at the right time as I got the service just before last year’s Wrestlemania so I managed to watch it live. I actually used the service quite a bit since then and I have been using it to watch all of the pay-per-view events. However, I’ve been questioning if it’s actually worth paying the prescribed monthly fee because I’ve just been using the service to watch just the pay-per-view events. It’s actually kind of weird; I now have the ability to watch all of the RAW, Smackdown, NXT and a whole backlog of retro programming all related to “sports entertainment” and yet I’m not using it.

The problem isn’t that I have access to all this content. The biggest issue is that my interest in “sports entertainment” and the WWE in general has been waning. There are now times when I realize that I skipped a RAW or Smackdown, two shows that used to be on my weekly roster of programs I had to watch. There are times when I forget when the next pay-per-view is coming up and I have to watch the replay in one form of another. But why? Why is my love for “sport entertainment” drying up? To try to wrap my head around the answer, I decided to go try my “freeform writing” experiment where I just write about a topic without really thinking about things like “grammar” and “structure” and just write about my thoughts and feelings on the topic. I do this a lot and I actually did managed to figure out why I really don’t care for Nikki Bella using this process before. So I hope it’ll work again so I can try to figure out what’s wrong with the WWE and its programming. 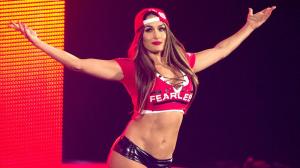 I guess the best way to start this out is to actually look into why I love the WWE before. I started watching wrestling when I was incredibly young. Some of my earliest memories actually involve watching the Attitude Era of the WWE. This is when guys like “Stone Cold” Steve Austin, The Rock and Mick Foley were the main draws and it was indeed a heck of a time to be a wrestling fan. This was also the time when guys like Shawn Michaels, Triple H and The Undertaker were in their prime. Or, at least, were still doing some incredible stuff. Needless to say, the action was incredibly violent and there were a lot of gratuitous moments involving the action in the ring and in the stories that were being told. It was over the top and a blast to watch.

I guess it helped that there was a certain edginess to RAW and Smackdown during this period. The storylines would just take a step beyond the border of sanity and dip its toes into insanity. But there was a little more to the storytelling than just blatant sex and violence. The wrestlers just felt more involved and I think that would be one of the things that the WWE is doing wrong: a lack of strong personalities.

To be fair, there are some characters that are still incredibly entertaining. I still get a kick out of The New Day and their antics for the most part. You also have… well, had… the pairing of Enzo Amore and Big Cass. AJ Styles and Kevin Owens also do incredible jobs and old ring veterans like Chris Jericho and, to some extent, John Cena pumping up the crowd with their antics. However, most of the WWE Superstars come off as bland and boring. Former charismatic personalities like the arrogant Dolph Zigger and the naively hypocritical former NXT Champion Bo Dallas. And don’t get me started with the current “Big Dog” they’re trying to push, Roman Reigns!

You’re going to shove what up me?

In a way, I guess you can say we’ve been spoiled by the Attitude Era and their charismatic wrestlers. There’s a reason why Kurt Angle’s return as RAW General Manager was met with excitement. It’s no wonder why, every time The Rock makes an appearance in the WWE program, everyone gets hyped. They were both spectacular in the ring and on the mic because each and every one of them had personality and charisma oozing out of their pores. They were easy to get behind because of it. I can’t really say the same thing for Roman Reigns and Baron Corbin. Even AJ Styles, who would give great bombastic mic performances when he was a bad guy, is getting stale and bland ever since he became a good guy because he’s not cocky anymore, which is the very thing that made him fun to watch in the first place.

But the over the top personalities of the Attitude Era also helped on another aspect: the actual storytelling. The WWE of yesteryear would take their time in weaving an actual tale as to why these guys were in a feud. They didn’t necessarily have to feud for whatever championship. They would hate each other for other reasons. It could be The Million Dollar Man Ted Dibiase trying to simply buy the World Championship off Hulk Hogan but not being able to do it. It could be a sibling rivalry like with Kane and The Undertaker. Or it could even be something as recent as a weird love triangle between AJ Lee, CM Punk, Daniel Bryan and Kane… which would make it more like a “love square,” I guess. But you get what I mean.

Those are just a small sampling of stories where the WWE told tales without having big, burly dudes becoming envious of another man’s belt. But nowadays, most of the storytelling in the WWE is just focused on the titles. This is actually problematic in more ways than one. Not only does this limit the drama as the conflict isn’t personal, the midcard wrestlers suffer because they never get enough exposure, which was never the case before. Now, they only show the guys not in the title hunt unless they’re only to be beaten by the guys who are actually deemed to be “championship” caliber.

There are now probably just a handful of midcard wrestlers that get actual screentime but, off the top of my head, the only one I can think of are Enzo and Big Cass because of their blowup and Jason Jordan because of the out of nowhere storyline where he just so happens to be Kurt Angle’s son. Not that I mind about how they just decided to bring this up all of a sudden. At least it’s a story featuring someone else who’s not in the title hunt!

There may be more midcard storylines but they would appear to be totally forgettable because I can’t remember them! This is sad because, a lot of the times, I would actually watch both RAW and Smackdown because of the midcard acts and their antics. It might be Santino Marella trying to woo Emma or maybe it could be Heath Slater trying to beat any of the WWE Legends. These bits were entertaining side stories that were just enjoyable to witness. But now? These “side stores” are few and far between with the majority of the programming just talking about all of the titles.

Oddly enough, the second problem is an easy fix. All the Creative department of the WWE has to do is write stories for the midcarders, right? However, I don’t think they can because I have a feeling they won’t be able to pull it off because most of them don’t know how to adlib. There are a few shining examples like my new main love in the WWE, Alexa Bliss, who is able to play with the crowd and react to what they’re saying. But, in general, most of the WWE Superstars just don’t know how to talk on a mic! Even the top names like Roman Reigns can’t give a decent promo!

This issue is going to take much longer to fix because you gotta get the wrestlers involved in this and actually practice how to talk on the microphone. They have to be able to break out of their shells and be more like Steve Austin, The Rock and Mick Foley. Get those three to talk to the wrestlers and tutor them on how to put themselves into their promos to make their mic work believable. Heck, make them watch videos of Hall of Famers like The Million Dollar Man Ted Dibiase and “Macho Man” Randy Savage so they have some templates on how being over the top actually works when doing promos! Make them watch that weird “cream of the crop” promo where Randy Savage somehow keeps on pulling up tiny cups of cream like some weird buff magician as an example!

But I think the biggest problem is that the WWE is afraid to take the risk of allowing the wrestlers to be “themselves” in the ring. As far as I know, the most successful Superstars always put a big of themselves in their wrestling personas and crank that aspect up to comical levels. I don’t think Macho Man Randy Savage talks like that in real life, but he made it an integral part of the character and it worked. I don’t think Steve Austin is that much of a redneck but it was when he adopted the Stone Cold persona that his career flourished. I think this is why The New Day worked so well. If you go and watch Xavier Woods/Austin Creed’s YouTube Channel about gaming, you can see that he behaves almost the same way as he does in the ring. And that goes for Kofi Kingston and Big E. They’re goofballs in real life and they tap into that part of themselves whenever they become WWE Superstars. I don’t think the other younger Superstars have been trained to channel that part of themselves yet.

After writing all of this, I guess my problem with the current programming of the WWE is that it’s just not as good as it was before. The wrestling and the action in the ring is actually pretty good. However, it’s hard to become invested in what’s happening in the ring because I’m not invested in the Superstars as I was before. And that’s both the fault of the WWE and the wrestlers themselves. It’s the WWE’s fault for not letting the talent experiment with what they can do in and out of the ring. The company has just been putting too much focus on the main event scene and totally forgetting the other wrestlers that are hanging in the back.

But it’s also the wrestlers’ problem because they also have to be able to get over their shyness and be more bold in the ring. They have to, as they say, grab that brass ring when the opportunity presents itself. They have to be bold but not just when they’re wrestling. They have to be make the leap of actually putting themselves into their mic work as well.

Do you have any issues with the state the WWE is in right now? Let me know what they are in the comments section below!