There was a time when movies based on comic books were crap. Actually, it wasn’t too long ago when it was the standard to get movies like Howard the Duck, Daredevil and Fantastic Four was the norm. Oh, there were those anomalies like the original Superman and that one Tim Burton Batman film, but it was generally thought that films based on superheroes were garbage. We can thank Marvel for this reversal of fortune for the most part. Ever since Marvel started their own cinematic universe with Iron Man, even non-comic book fans look forward to superhero films.

Soon after Iron Man, Marvel came up with hit film after hit film. But the Marvel Cinematic Universe is more than a franchise. The films follow a entire continuity with the characters in each Marvel film having ties with each other. Marvel is currently working on their Phase 3 slate of film that will last until 2019. But where should they go after that? There are rumor swirling around that the Marvel brain trust are already lining up plans for Phase 4 once Phase 3 is done but nothing has been set in stone. It may seem like a long ways ahead but I have a rather radical suggestion with what they should do.

I say Marvel should end their Cinematic Universe after Phase 3 and reboot. Not only that, I also think they should not make them live-action affairs anymore and make them 3D animated films.

I know a lot of people have invested a lot of time in watching the Marvel Cinematic Universe. They kind of have to if you really want to get the most out of it. I myself am not really loving the idea of scrapping a decade’s worth of continuity but I think it would be for the benefit of everyone if they do start from scratch after Phase 3 ends.

One of the reasons why I think it may be wise to use 3D animation after Phase 3 is because, well, the actors in these movies aren’t getting any younger. Comic book characters have the advantage of virtually not aging a day unless the writer wants it. Spider-Man may have started his career as a teenager but he has remained in his late 20s/early 30s for a few decades already. You see, Spider-Man and all comic book characters live in something dubbed a “floating timeline.” This allows writers to keep all the characters the same age even though years have already passed. This also allows superheroes to experience real life events the Vietnam War, the birth of the Internet, 9-11 and many more without showing any signs of aging.

Unfortunately, real life and real people do not follow the principle of a floating timeline. So we will see the actors who do take on the roles age and slow down. Now, imagine: it’s already been a decade since Robert Downey, Jr. stepped into the metallic shoes of Iron Man. The man was around 40 when he took the role. He’s now in his 50s. As much as I love Robert Downey, Jr., and I hope he takes care of himself, there going to be absolutely no way he can keep on donning the Iron Man suit forever. He may be the perfect embodiment of Tony Stark but he has to hang up the metal suit eventually.

This doesn’t just go for Robert Downey, Jr., of course. All the actors will eventually have to give up their roles. So, what’s Marvel going to do when these actors can’t fit in their costumes anymore? I guess they can kill them off and pray that the heroes they introduced in Phase 3 and have lined up for Phase 4 can satisfy fans. Comic book fans are kind of used to their favorite heroes getting killed off anyway. But I don’t think the average movie goer will like seeing their favorite heroes get killed off. It won’t matter if they give them a heroic death. The average fan may just give up if they see that.

I guess Marvel could try to find people to take on those roles as well. But that won’t float over real well also. Like I said, I don’t think anyone now could take on the role of Iron Man besides Robert Downey, Jr. anymore. He is Iron Man, now and forever. And I could say the same for Chris Evans, Chris Hemsworth, Scarlett Johannson, Samuel L. Jackson and the list goes on. When you look at them, they are Captain America, Thor, Black Widow, Nick Fury and the rest of the characters we’ve seen over the past decade of films. They simply cannot be replaced anymore. 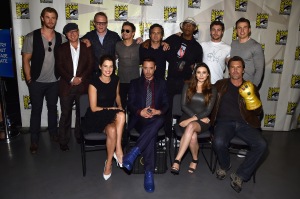 This is why I think they should become 3D animated films. The characters don’t age and they can still be voiced by pretty much anyone. That doesn’t mean that the stories will have to be dumbed down or anything like that. They can still have the same quality of the current Marvel Cinematic Universe. Besides, doesn’t Disney, the purveyors of films like Wreck-It Ralph, Big Hero 6 and Frozen, own Marvel? I would think they would be able to make some really great 3D animated films using Marvel properties.

But it’s not just the prospect of an aging cast as to why I think it would be a good idea to reboot and make them 3D animated films in the future. I also have the fear that Marvel won’t have anywhere to go after the next couple of Avengers films.

It was an exhilarating feeling to see the Avengers actually assemble for the first time in 2012 film. It was the culmination of all of the previous other Marvel movies and seeing Iron Man, Captain America, Thor, The Hulk, Black Widow and Hawkeye steel themselves before the battle was one of the most awesome scenes in movie history. It’s still an iconic shot that still gives me nostalgic goosebumps whenever I see it.

While that was great, comic book fans had another reason to look forward to the future of the Marvel Cinematic Universe after watching the Avengers. It was in the after credits scene where we got our first glimpse of Thanos, the Mad Titan. And we all knew where this meant: we were going to see the Infinity Gauntlet crossover event on the big screen eventually!

For comic book fans, the Infinity Gauntlet is a huge dead as it is one of the most iconic stories in Marvel history. It was a landmark story where all of Marvel’s greatest heroes came together to try to take down one supervillain… and lost! And it does seem like everything in Phase 2 and 3 are leading up to it. Marvel has been sprinkling in the legend of the Infinity Stones the entire time. Oh, and they’ve already confirmed that we will be getting The Avengers: Infinity War in 2018!

What I would give for just one of those Infinity Stones!

But, once Infinity War is over, what then? I can’t really think of any major crossover event from the Marvel comics that could top the Infinity Gauntlet storyline. I guess they can try to make an Avengers film based on Secret War/Invasion or maybe one of the stories involving the Kree/Shi’ar/Skrull wars. But those stories just pale in comparison to the impact Infinity Gauntlet had. If that’s the case, what else can Marvel do once the heroes defeat Thanos? Wouldn’t other villains just pale in comparison after they defeat someone who is practically a god?

The Infinity War would be a great way to close this version of the Marvel Cinematic Universe as it would be the biggest fight they would ever have. By that point, there’s nothing for Marvel to do that can be as exciting as taking on Thanos with the Infinity Gauntlet. Which is why I think it would be prudent to reboot the entire thing. They can say that this version of the Marvel Cinematic Universe has ran its course and it would be time to start things anew. Better to end on a high note that to keep puttering on in mediocrity.

Well, those are just my thoughts. I do want the future of the Marvel Cinematic Universe to remain as bright as it currently is. I don’t want them to just keep on making movies just because they make money. I want them to keep delivering top notch quality superhero films, which is why, if they do start running out of ideas, Marvel should be brave enough to reboot everything and go CGI if necessary.

Where do you think Marvel should go after Phase 3? Let me know in the comments section below!