The last two weeks have been a flurry of budget deadlines and performance appraisals at work, mommy duties at home, and overall sleeplessness (it did not help that I was still recovering from a nasty bout of the measles), that I had to skip one article here. But I’m back, and ready to resume being a third world geek again.

I had to be pretty mobile in the last few weeks, and spent many hours in conference calls, traffic jams, and waiting rooms, with only my trusty smart phone for company, so much so that I reconnected with a few mobile games I had already abandoned years ago, like Clash of Clans, or CoC, as it is now more popularly known.

I don’t think you’d have to ask too many people who use smart phones nowadays before you come across someone who plays or have played CoC, so it does not need much introduction. I started playing Supercell’s hugely successful MMO strategy mobile game just a few months after its launch in 2012. Before that, I was a fan of RTS tower defense games like Fieldrunners and Square Enix’s Crystal Defenders.

Crystal Defenders was a great mobile TD game by Square Enix which never got the popularity it deserved. It is now no longer available in the App Store. RIP.

CoC seemed like it was just another tower defense game without the real-time aspect, because instead of losing the towers you built after an enemy wave annihilates you, your buildings simply “regenerate” when you log back in. Back then, the app was only available in the iOS platform, which meant that there was exactly one other person in the office who played the game apart from me. At the time I was also playing another popular Supercell app called Hay Day, a farming game similar to Farmville of the olden days, and more recently, Township. Between those two apps, my mobile gaming routine were pretty much set back then.

I played Clash of Clans and Hay Day for the building aspect of the gameplay more than anything else. The fact that I did not necessarily have to be logged in all the time for the games to progress was also one big basis of their appeal. With CoC, I did not necessarily enjoy the battles, and was never really any good at attacking other villages, but I always took pride in what I built.

This was in the earlier parts of the game, before people started getting really good at the game enough to build websites upon websites dedicated to cheat sheets and suggestions on the best village layouts and attack strategies, not to mention the numerous bots and x-mods in their wake. We didn’t even fully understand the game’s village-matching and loot-calculating algorithms. There were still players who thought walls were not needed when you built your village close to the edge of the map (guilty). You would not know how other players in the world were doing, since there were no Leader Boards yet. Like many other early adapters, I progressed in the game by trial and error, and enjoyed it tremendously.

Enter mid-2013. The app was made available on the Android platform, and CoC’s popularity shot through the roof. A new feature called Village Edit mode allowed players to re-work their village layouts without the risk of being attacked if they leave things unfinished. Improved algorithms matched based on trophy number, and loots were based on the town hall level. I started going up in the game, but made one fatal, crucial mistake, which pretty much made me quit it – I upgraded to Town Hall 8 (this was the 2nd to highest TH level at the time), before I maxed out my troops and defense. This essentially meant that I needed to maintain a higher trophy count to be matched against villages with higher potential for loot gains, but I didn’t have the level of troops needed to beat these villages. It would take me hours, and a lot of elixir, to cook up an army, and the loot would fall short to compensate most of the time.  It was sometime in late 2013, just when the game was starting to go fully mainstream, that I quit playing CoC for the first time.

I picked it up again in and became semi-active in 2015, after an update which made it easier to get more loot during attacks. I was introduced to the concept of Clan Wars and Clan Perks, which were huge steps forward for the community aspect of the game. Before this time, being a member of a clan just meant having extra troops in the Clan Castle. In Clan Wars, individual clans are pitted against each other in a battle for stars. Active members of the clan stand to take home a significant amount of loot if they win. The clan itself earns points in the form or XP towards Clan Perks, such as upgraded donations and shorter training time. I joined a friend’s stronger clan, learned how to “spam play” for loot, and managed to upgrade all my towers, troops, and walls to maximum level for TH 8, before upgrading to TH 9, only to be met with a myriad of upgrade options for the higher town hall, which required more resources and building time, so I abandoned my village yet again. This was also around the time that many users stopped playing the game in favor of the new, more fast-paced and therefore instantly-gratifying game set in the same world, Clash Royale, and of course, the novelty game that was Pokemon Go. 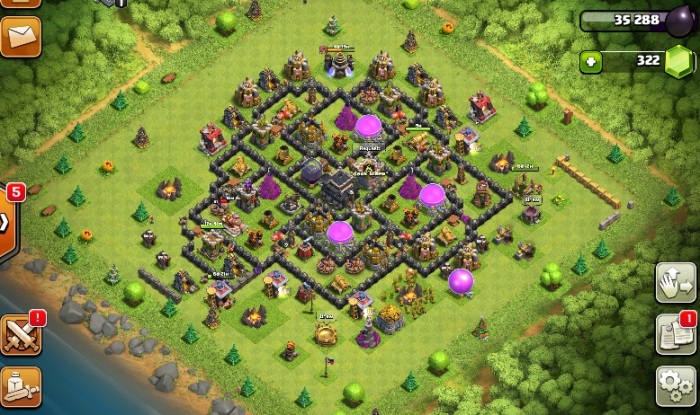 My hot mess of a TH 9 village

However, just last week, I started playing actively again. The sequence of events started last Christmas, when I decided to be cellphone Santa and gifted my nephew with an iPhone SE. I also promised to give him a year’s supply of prepaid data, thanks to Globe’s GoSakto promos, and that I’d help him set up his CoC village. I had to join his friends’ clan as a “stronger” player, for my donations and clan war contributions, so I thought that I might as well carry on. I was pleasantly surprised that some recent major updates have made the game more playable.

Many popular games have come and gone, but despite the rise of MMO and RTS apps in the mobile landscape, Clash of Clans remains to be one the most resilient games in the market, as evidenced by the fact that it is still among the top-grossing apps this in the App and Play Stores this year. Regular intelligent and adaptive updates will keep it there for many years to come, no matter how many times I abandon my village.

Do you play Clash of Clans? Share your experience in the Comments section below.