During this year’s EVO, Street Fighter fans got hyped when Capcom announced their new DLC content that was linked to the Capcom Cup Pro Tour. They teased the fighting game community with a new stage called Ring of Destiny and a couple of fancy new outfits for Cammy and Chun-Li could wear. And the hype was palpable when, during the Top 8 of Street Fighter V, we actually got to see the new Ring of Destiny stage in action!

But all the excitement came to a halt when they finally released the price for all this juicy DLC content. The new stage is priced at $9.99 and the additional costumes cost at $5.99 a pop! Purchasing them separately (Ring of Destiny and the new dresses for Cammy and Chun-Li) would cost you $21.99! Oh, and there’s supposedly a third “mystery” costume that’s not available yet. But you know that’s going to be priced at $5.99 as well, bringing you to a grand total of $27.96! And that’s not including all the extra colors and titles! You can, of course, get the entire package if you get the Capcom Pro Tour Premier Package at the “discounted” price of $24.99… which is still hella expensive!

Now, some of the proceeds of each purchase will be added to the pot of the Capcom Cup finals to be held later this year. But $25? That’s an incredibly steep price and fans weren’t happy about it! People raged about how this is essentially highway robbery and dangling the idea that some of the proceeds will “go to charity,” so to speak, is just playing dirty. Well, I’m not sure how much Capcom is raking in from the sales of the Capcom Pro Tour Premier Package due to the negative outcry over it. But I did want to see if it was worth the expense. And, since I just so happened to have some money on my PlayStation Account that I wasn’t using, I decided to take the plunge and purchase the entire thing for myself!

For this review, I’m going to tackle each item individually, starting from the new stage, Ring of Destiny, then moving to Cammy and Chun-Li’s new fancy duds. I’ll then deal with the miscellaneous stuff, such as the new colors and titles and close the entire review with my final thoughts on the entire package. Alright, let’s get started! 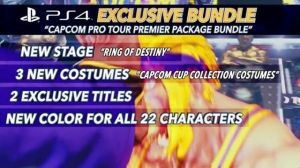 Got a lot of things to cover!

Let’s go look at the most expensive item in the Capcom Pro Tour Premier Package, the new Ring of Destiny stage. Honestly, it looks really good! It certainly doesn’t look like your typical stage in any of the previous Street Fighter games, making it one of the most unique stages in the series. There is a lot of things going on in the background which makes things interesting. There are fireworks that explode at the start and end of each round. During EVO, the sign tickers said EVO 2016 as it was the tournament of the time, but I’m guessing that’ll get updated once other major tournaments like SoCal Regionals and South East Asia Major rolls around.

There are a lot of background onlookers but practically all of them are reused people from earlier stages but they are arranged in places that make sense at least. The hot dog vendor from the City in Chaos stage is chumming around with the Chinese restaurant owner found in Bustling Side Street. The guitar playing rocker from Union Station is now lumped in the Brazilian and the Cossack Dancers. It is still disappointing that Capcom didn’t create new background characters but seeing them in a different stage and mashing them together in a way that makes sense is kind of creative. However, the thing that left me incredibly disappointed was the music for Ring of Destiny. Capcom simply remixed the default menu music instead of composing a new kickass theme song! The song is good and all but I wanted something new! They should’ve created a new epic song for their supposedly epic stage!

Moving on to the new costumes for Cammy and Chun-Li. Both of their Capcom Pro Tour outfits look really classy and makes both ladies look like their out to a fancy event instead of participating for a brawl. Totally not realistic but that’s precisely why they look great. I will say that I appreciate Chun-Li new garb more than Cammy’s. There is a lot to like about Cammy’s new “night on the town” dress. The wrap around her shoulder actually looks like a lot of work went into just making it. And she does look really stylish in it so it’s not bad. It’s just that I think Capcom put a lot more effort into Chun-Li’s outfit.

Now, Chun-Li’s Capcom Pro Tour costume is pretty damn impressive! Capcom had the self professed strongest woman in the world dressed to the nines! I don’t know a lot about women’s fashion but I do know that Chun-Li’s outfit is several levels of fantastic. The dress also emphasizes Chun-Lu Chinese heritage as well. I guess it looks more elegant when you compare it to Cammy’s, which makes it better. Still, Cammy’s fancy duds is nothing to sneeze at either. 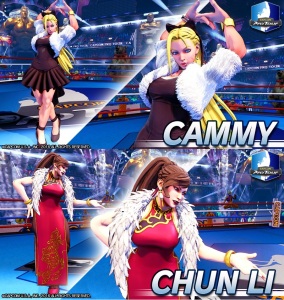 Ready for a night on the town!

There’s also supposed to be a third outfit but it’s designated for a “mystery” character. No one really knows for whom but I’m honestly hoping it’s going to be for one of the guys. Sure, it’s like to have the ladies all dolled up but I believe in equal rights. Besides, the Street Fighter V ladies already have a line of swimsuit alternate costumes out. Can’t we have some DLC for the guys as well?

The Capcom Pro Tour Premier Package also includes an extra color scheme for all 22 fighters’ default outfit. Essentially, they used the yellow and blue mixture of colors used on the Capcom logo. While the colors do work well for making the word “Capcom” pop out at you, the color scheme doesn’t necessarily transfer to shirts and trousers. This alternate outfit looks pretty ugly for most characters. It works for characters like R. Mika and Zangief but that’s because they used the yellow to highlight the blue on their costumes and not the other way around. Having M. Bison, the malevolent dictator of Shadowloo wear an all yellow trench coat makes him look like a pansy. And Birdie in this new color? Bleeach!

I also do have to mention that the package comes with two new titles you can add to your profile. And they are extremely stupid titles! They are “Capcom Cup 2016” and “Capcom Pro Tour 2016.” Why the heck would I want to use those titles? To promote the Capcom’s officially sponsored tournament? Why would I want to do that? I don’t think anyone would want to plaster on their Street Fighter V profile unless they want to brag that they spent $25 on this DLC package.

And that’s what it all boils down to: its $25 price tag. Does the content warrant the high price? In my opinion, no. The Capcom Pro Tour Premier Package’s price point of $25 is a bit extreme, especially for DLC content. Capcom is saying that a portion of the money they make from the package will be added to the pot for the finals of the Capcom Cup tournament on December. What they fail to mention is how much will be allocated to the tournament! As we don’t have that exact figure, potential buyers only see this as a cash grab on Capcom’s part.

How much support am I giving when I buy this again?

By itself, the Capcom Pro Tour Premier Package is an overprice hunk of DLC. I may change my mind if they actually mention how much of the $25 is being diverted into the Capcom Cup pot. They can also lower the price. I think $7 for Ring of Destiny would be a little high but fair and each of the new costumes should cost $3 each. In all honesty, $15 is more than fair for the Capcom Pro Tour Premier Bundle. As it stands, $25 is just too much for such little content.

What do you think of the high price point for the Capcom Pro Tour Premier Package? It it worth your money? Let me know in the comments section below!