I think I’m the only one who actually likes the original MP-09 Rodimus Convoy figure. The figure has had a lot of poor reviews for various reasons. A lot of people have gotten the figure with numerous quality control issues such as legs that break easily and the figure’s inability to hold his guns securely. It’s impossible to transform him into his Space Winnebago form due to the spoiler scraping into the correct slot. He also has a really teeny tiny matrix of leadership (I intentionally didn’t capitalize anything because it’s so small!). I’ve personally experienced these issues with my version of MP-09… but I still like it because, actually, I love the animated Transformers films and I thought his debut was awesome!

But, as much as I love my Masterpiece Rodimus Convoy, I’ll be the first to admit that I’ve always wanted Takara Tomy to make a do-over and fix a lot of the mistakes they made. And I always wanted to get a Hot Rod Masterpiece figure that was to scale with the other Autobot vehicles in the Masterpiece line. So, with Takara Tomy finally releasing MP-28, Hot Rodimus, I finally get to see if they got, at least, Hot Rod right this time.

Right off the bat, after opening the box, I had an problem with Hot Rodimus’ vehicle mode. One of my biggest issues with MP-09 was its inability to roll properly while in vehicle mode because of all the loose bits hanging underneath his chassis. Well, at least for my MP-28, it appears Hot Rodimus has the same issue! There’s this orange piece that’s jutting out a bit too low which is preventing the front wheels from touching the ground! I had to really squeeze that piece in in order to get it rolling smoothly. Aesthetically speaking, I do have a few gripes as well. The wheels look ridiculously small and the exhaust pipes should have a bend in the middle but, other than that, I do like what they did with it. I especially love the chrome engine and the turquoise canopy! Very 80s cool!

Transforming Hot Rodimus from vehicle mode to robot mode was definitely less of a hassle than with MP-09. Actually, I would say it’s a positive joy to get him into robot mode! There are some creative feats of engineering here, like the way the entire rear of the car folds into itself to expose the vents in Hot Rodimus’ backpack as well as how the upper thighs fold up into the calf section. Also, everything really tabs together really securely, making Hot Rodimus’ robot mode a really study figure.

MP-28’s robot mode looks good for the most part. His face sculpt looks really good and I do like the etching they did on the chestplate. Some pictures on the Internet may make his backpack look huge and he is a little back heavy because of it. But, if you do see him in person, it doesn’t look that bad, honest! However, I do think the legs look either a little too skinny or they’re too long. I can’t decide. But my biggest issue with Hot Rodimus’ robot mode has to be the shape of his chest. It’s soooooo flat and blocky! Even from the front, it just looks like a box! It looks even worse when viewed from the side as there’s just no shape to it! I would’ve been better if Takara put some angles to make him look “muscular” because, right now, Hot Rodimus really needs to work on his pectoral area! 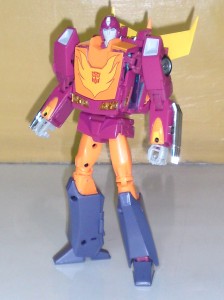 Dare! Dare to believe you can survive…

MP-28 Hot Rodimus doesn’t have the plethora of gimmicks and accessories MP-09 Rodimus Convoy came with but he does come with a respectable amount. He has much more than the most of the Autobot cars in the Masterpiece line anyway. Masterpiece Hot Rodimus comes with two pistols… which he never needed to use in the movie as the pipes on his arms can fire lasers. But it is a good homage to the original G1 figure.

You can actually attach them to the roof while in vehicle mode or open up his engine and attach one of them there. I can’t help but feel a twinge of disappointment since he doesn’t have proper weapon storage like the later Masterpiece Autobots have, namely Bumblebee, Wheeljack, Tracks and Ironhide. I also need to mention that they did build in Hot Rodimus binocular visor as well and, while it looks good, I’m kind of nervous of its quality. I’m afraid that one of these days, while trying to get it down over Hot Rodimus’ face, it’s just going to snap. Maybe I’m worried over nothing but that’s the way I feel.

Honestly, why would Hot Rod need guns when he’s got lasers built into his forearms?

He also comes with his iconic spinning sawblade which did make an appearance in the animated film. It does look really good and they did a good job getting the colors of the blade just right. However, it looks rather oversized for the figure and extends really far away from the arm.

But the accessory that makes MP-28 Hot Rodimus stand out is, of course, his fishing pole! It’s mostly a gray piece of plastic with a splotch of black on the spool and it doesn’t even move. However, I love it because, for some odd reason, everyone who saw the movie does remember that fishing scene! Maybe because it’s the rather surreal image of watching a robot go fishing with an oversized pole. But I do love it!

I also forgot to mention that you can open up Hot Rodimus’ flat chest to reveal a hole where you can slot in MP-10 Optimus Prime’s Matrix of Leadership. However, the figure doesn’t come with its own Matrix! Why? I think this is the primary reason for my issues with the chest piece being so flat. If they foregone this and added a few articulation points to the hood/chest, I think his chest would’ve looked so much better.

Overall, I would say MP-28 Masterpiece Hot Rodimus is a mark improvement over MP-09 in a lot of aspects. However, I can’t help but feel a bit underwhelmed and somewhat disappointed by the figure. It’s still a really good addition to the Masterpiece line and I am glad I decided to purchase him. But there are a few niggling issues like the flat chest and his vehicle mode not being able to roll properly unless you have everything in perfectly that would’ve made this a really fantastic figure. Still, if you were ever burned by MP-09 and its quality control issues, Masterpiece Hot Rodimus is definitely the figure you deserve to get to wash the disappointment away.

What’s your opinion on MP-28 Masterpiece Transformers Hot Rodimus? Let me know in the comments section below!