I didn’t start watching Nintendo Directs – Nintendo’s video presentations covering their various news updates and announcements – until after I got myself a Nintendo 2DS. But after I started watching them, I became more of a fan of the video game giant. These Directs, they have this special kind of energy and charm that Nintendo’s games are known for.

I even have a list of the most memorable Nintendo Directs and specific announcements like the Iwata/Reggie fight when Super Smash Bros. for the Wii U and 3DS was announced, the first ever New Nintendo 3DS announcement in a Nintendo Direct for Japan, and the Cloud and Bayonetta Smash DLC reveals. My mouth was literally wide open as I watched the Cloud DLC presentation.

This happened in a Nintendo Direct.

The emotional impact of the last two Nintendo Directs, however, was diminished due to information leaking out a day or two before the said presentations. Two weeks back, Nintendo held a Pokemon Direct to celebrate the 20th Anniversary of the Pokemon franchise. In the days leading up to the event, there was buzz and speculation. Is Nintendo going to announce the oft-rumored Pokemon Z? Are we finally getting a glimpse of Pokemon Go, the Pokemon Company’s first legitimate Pokemon game to be released on mobile phones? A day before the Pokemon Direct, video game websites started running news articles about certain Pokemon trademarks and patents, and these logos made the Internet rounds:

Sure enough, the Pokemon Direct did revolve around the announcement of a new pair of Pokemon games. And unlike the last pair of games which were remakes of previous Pokemon games (Omega Ruby and Alpha Sapphire), these new Pokemon titles are for the next generation of Pokemon.

This kind of announcement would have broken the Internet (at least, the corner of the Internet inhabited by Pokemon fans). After all, the previous generation of Pokemon games (Pokemon X and Y) were both financial and critical successes. But no. Those savvy enough to know about Nintendo Directs and be able to watch are also savvy enough to be in the loop when it comes to video game news, so the big surprise of this Pokemon Direct presentation wasn’t much of a surprise at all. Summing up the general feel that I observed, I’d say people were more “That’s it? no other announcements?” than “Wow that was awesome! Sun and Moon!” 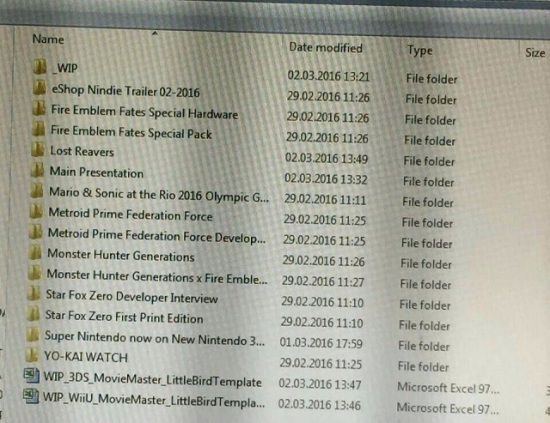 This screenshot covered everything that was discussed on the Nintendo Direct for the European region.

That leaked image was right on the money. Before Nintendo had the chance to announce it, people already knew about Monster Hunter Generations. We were all expecting the news that Super Nintendo games are finally being released via Virtual Console for the New Nintendo 3DS. If I didn’t have any idea that there’s a possibility of playing Super Nintendo titles on my 3DS, my mind would have been blown by this. But my first reaction was more of relief that the leaks were true than awe.

The best analogy that I can think of is finding out that your friends are throwing a surprise birthday party for you – you’re still happy about it, but it’s no longer as memorable.

I don’t really know who to blame for this. I don’t understand how the people who are leaking this information are benefiting from these leaks – are video game websites and media outlets paying for these exclusives? Have we reached the point wherein people would pay money for the latest Nintendo gossip is as tabloids would for any celebrity news and rumors?

As for the video game websites, I’m thankful for those who are a little more responsible when it comes to disseminating information. Nintendo Life (www.nintendolife.com) is one such website that is at least careful when talking about possible leaks and spoilers,holding off on mentioning any specifics in their headlines and avoiding the use of logos on their lead/featured images (like the Pokemon Sun and Moon logos) and giving readers the option of avoiding the leaks.

And now that I think about it, I think there’s a good chance that I caught some of these leaks on social media rather than on the video gaming websites that I frequent. In today’s “Like”- and “Share”-hungry era, I guess there’s no fixing this – people will share what they want to share. It’s up to me to filter what I see in my social media circles. And I might just have to stay off of social media if I know that Nintendo is about to make big announcements – for instance, this year’s E3 is just around the corner.

I guess Nintendo owns the most accountability here. How is the information leaking in the first place? The video game giant needs to be a little more tighter when it comes to information security, especially since the NX is coming.

But yeah, I think that in an era where information is spread on such a wide scale and in a very fast manner, I hold the responsibility of choosing what information to take in. In a similar manner that some people go “off the grid” (stop going online) whenever there’s a big movie coming out so that they’d avoid spoilers completely, I may have to do the same before any big Nintendo Directs if I want to stay uninformed and allow Nintendo themselves to surprise me with what they have in store.

One thought on “Leaks are Ruining the Magic of Nintendo Direct”