Yesterday, I wrote up an editorial why fans of the 80’s Transformers cartoon series hate the live-action Michael Bay films. I didn’t do a good job of reviewing what I wrote since I did make the silly mistake of saying the primary antagonist of the 1986 animated film was Galvatron (the reborn version of Megatron) instead of Unicron, the huge planet eater voiced by Orson Welles. My friend pointed out my error and I did correct it. But I had to admit I was distracted when I wrote that article.

I was distracted since this was sitting on my desk while I was writing that article. 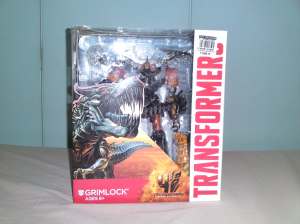 Not gonna be in mint condition soon!

I really wanted to open it right then and there but I knew I would be distracted if I did. I would be too busy playing with it and I wouldn’t have gotten that article out. So the first thing I did when I submitted it and scheduled it to be published was open this bad boy up and see if this was any good.

If there was one thing that the films did get right, it was the toys. I honestly love the toy line since the transformations are really complex and fun to do. Unlike the old 80’s toys, it doesn’t take 3 simple steps to transform the toy from robot to its alternate mode. The Leader Class toys are usually the most complex figures in the toy line. And since I’ve never owned a Grimlock figure in my life, I was especially stoked to get the Leader Class version of the character.

The first thing that struck me was how… slender Grimlock looked like in Robot Mode, which is in direct contrast of the good old bulky look the character had during the animated series. But I actually like it! Even though its humanoid mode is kind of skinny, it does look great! Grimlock has a nice looking gladiator look. And his huge mace is a pretty intimidating and unique weapon!

I do have a few problems with this mode, though. The forearms, which turns into the legs in T-Rex mode, obviously have the feet tucked behind them. Also, because of the positioning of his dino-skull shoulder guards, you can make him raise his arms over his head. Finally, the feet have these huge spikes on the end of the toes and look very awkward. Even with these issues, I’m very satisfied with Grimlock’s Robot mode!

Since it’s a Transformer, Robot mode is just half of the toy! I still had to transform it into a T-Rex! The mere fact Grimlock is also a T-Rex was one of the reasons why I really wanted this toy badly. Unfortunately, I was in for a rude awakening.

After I transformed Grimlock into its T-Rex form, this is what I saw: 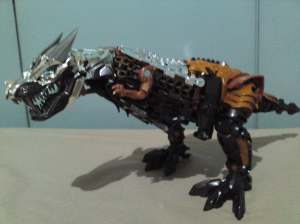 What the heck is this?

This didn’t look like a dangerous and deadly T-Rex, King of The Dinosaurs! No, it looked more like a dachshund lizard all blinged out! There are so many things wrong with it! The most obvious thing is the length of its body. Its torso is incredibly long, making it look cumbersome and unwieldy (which it is).

Also, the really messed up the dino arms! They were made to be stored in the legs of Robot Mode so they were intentionally made to be short. Unfortunately, while it makes it easy to hide, they’re still incredibly short and look incredibly laughable in T-Rex mode! They should’ve made it longer. Or, if it wasn’t possible, they could’ve made them foldable so that they could fit more snugly in the leg cavity.

The torso in T-Rex mode is also hollowed out. It wouldn’t be too bad if the gap was hidden. But nope! In T-Rex mode, it’s in full view! And the view is ugly! Also, remember when I mentioned about his Robot mode forearms showing off his T-Rex mode feet? Well, the hands in Robot mode don’t even fold into the feet! The hands actually “transform” into the heels! It looks very ugly and pretty hard to miss!

But the worst thing about T-Rex mode is the huge amount of chrome! In Robot mode, it was okay and tastefully placed. In T-Rex mode, they overused it, making it look too shiny. It’s kind of hard to fear a shiny dinosaur. The engineers who designed Grimlock focused too much on Robot mode and T-Rex mode suffered greatly.

Overall, Leader Class Grimlock is half-good (Robot mode) and half bad (T-Rex mode). That means it’s not a total loss. I just wish its alternate form was better… but that doesn’t mean I won’t be collecting the rest of the Dinobots in the future!

Are there any Transformers toys based on the Age of Extinction film you’re looking forward to? Leave your thoughts in the comments section below!