I can still vividly remember the first Godzilla movie I ever watched. It was Toho’s Godzilla vs Mechagodzilla from the so-called Showa era. I actually remember my prepubescent little brain being stunned because of how it ended. The movie ended with the “bad” Godzilla beating the “good” Mechagodzilla by twisting its robotic head off. Granted, I was a stupid kid then and I didn’t understand that Godzilla was supposed to be the hero of the story while Mechagodzilla was the villain. Still, this movie left an impact on me and I’ve been a Godzilla fan ever since.

This is why I was so excited when I saw the poster for the latest Toho movie, Godzilla: City on the Edge of Battle. While I wasn’t a huge fan of the first film of this proposed trilogy, the poster did suggest that we were going to see this timeline’s version of Mechagodzilla! The robotic monster’s name is even mentioned in the trailer! Okay, the trailer was in Japanese but I can definitely understand that he said “Mechagodzilla” before that anime-like music hit!

I just watched Godzilla: City of the Edge of Battle and, honestly, after watching this 100-minute monstrosity of a film, I really shouldn’t have been so hyped for it in retrospect. I’ll go try to explain a little more but, as this is a SPOILER FREE review, it may be tough to really convey my disappointment. However, I’ll try my best to not reveal any details as, although the film has been out on Netflix for a while, I’m betting a good number of viewers, even Godzilla fans, may not want any story or plot points revealed so you can judge the film for yourselves. Suffice to say, as a Godzilla fan myself, I was incredibly disappointed but I’ll tell you the reasons why below.

Godzilla: City of the Edge of Battle takes place just a few moments after Godzilla: Planet of the Monsters. The returning allied forces of humans and alien races have returned to Earth and, while they thought they defeated Godzilla, it turns out the hadn’t and the returning group are scattered. Haruo, the leader of the group is rescued by a humanoid girl and he rallies his group in another attempt to defeat Godzilla once and for all after they discover one of the weapons the Earth has been working on before, Mechagodzilla, is still operational.

First of all, I have to mention that the animation and designs are pretty good. While I’m a huge fan of the classic “suitimation” Toho had been using before the current Godzilla trilogy, I will have to admit that they did good with the King of Monster’s overall look here. He’s definitely looks much bigger and has a more fearsome appearance than in any of the rubber suits. Mechagodzilla City also looks cool for the most part. It does give off a rather cold and impersonal mood but, then again, it looks like that’s what it’s supposed to be as it is a city that was created for the sole purpose of defeating the biggest threat to humanity.

Looks more like a factory than a city to me.

Unfortunately, the same cold and impersonal feeling can be said for Haruo and practically every human and alien in the film. Everyone just feels so uninteresting. I guess that’s what would happen if people, both human and alien, have been living on a ship for ages and just have a singular goal to destroy Godzilla. The problem isn’t that they’re bland. The problem is that all their characterizations and emotions never feel natural. All of a sudden, there’s a love interest that pops up because of jealousy and a character’s motivations suddenly change or something along those lines. Like I said, this is a SPOILER FREE review so those things are just generalizations of some of the twists that reel their ugly head.

But these twists don’t feel organic nor earned because of how these characters acted in the previous movie as well as throughout most of City on the Edge of Battle. Honestly, the characters I had the most fun with were mAina and mIana, the two “human” girls who lead Haruo and his group to Mechagodzilla City. And, yes, that’s how their names are spelled in the subtitled version of the film. While they aren’t the most interesting characters in movie history, at least they have distinct personalities than the rest of the cast. Besides mAina and mIana, everyone just seems interchangeable and disposable. They don’t get to do much here but maybe in the next film? 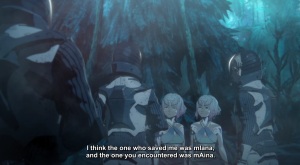 I didn’t know the Mothra Twin Fairies had names!

I do have to mention that I watched the Japanese version of the film with English subtitles. I watched Godzilla: Planet of the Monsters’ English dub and I thought the vocal performances were just okay. I was hoping that the original Japanese version would make the characters feel more likable. However, this was not the case as they felt just as bland and boring as the previous film, despite being voiced in Japanese. They still felt as dull as they did in the English dub.

Probably the worst sin of Godzilla: City of the Edge of Battle commits is that it rehashes the previous film’s story almost beat by beat. It doesn’t attempt to do anything fresh and feels like a rethread of the previous film’s story without even attempting to disguise that fact. Because of this, the entire experience is a “been there, done that” feeling and left me very, very bored! The first two-thirds of the film is, per the typical Godzilla film pattern, very boring but fans forgive that because the payoff, the big climatic battle during the last third of the film, is usually worth it. Here, the final battle is just a mess and hard to watch. There doesn’t even seem to be a whole lot of destruction going around during the fight, which is a staple of Godzilla films!

Not only that, they try to add some drama and tension during the final moments with some conflicts within Haruo’s returning force. But it never works as, like I said, the characters are so bland and uninteresting, I just didn’t care for them. If they died or they didn’t succeed… meh. Come to think of it, I was actually rooting for Godzilla to kill off everyone at the end because of how much I disliked the “heroes” in City on the Edge of Battle!

Kill them! Kill those boring and dull humans, Godzilla!

Godzilla: City on the Edge of Battle is probably one of the worst Godzilla films I’ve ever seen. I guess Toho can redeem themselves if the third installment, Godzilla: The Planet Eater, is actually good. Some story elements, like the introduction of mAina and mIana and their race, may become important in the next film so this maybe essential watching to get the full picture of the trilogy’s story. But, as of right now, Godzilla: City on the Edge of Battle is definitely something not worth visiting.

Have you seen Godzilla: City on the Edge of Battle? What did you think of it? Better yet, what was the first Godzilla movie you ever watched? Let me know in the comments section below!

One thought on “I’ll Review Anything: Godzilla: City on the Edge of Battle (Japanese Dub Version) (SPOILER FREE)”