During my junior year of high school, my friend lent me his collected edition of The Infinity Gauntlet to read during a study break at school. I was a die hard DC comics fan at that time as my grandfather has a collection of Superman and Batman comics and that’s all I read growing up. I was familiar with the more popular Marvel heroes but I never really read any Marvel comics. But the cover to Infinity Gauntlet looked cool as it featured a mean looking purple guy holding up his gloved fist while the background featured some of the Marvel characters I was familiar with. After an hour, I finished reading The Infinity Gauntlet and I had to take a moment. “Did all of that just happen in a comic book,” I thought to myself. I was blown away at how awesome it all was and it made me want to read more Marvel comics from then on.

The Infinity Gauntlet comic book sparked my interest in Marvel comics and characters. Flash forward to today and I’ve just watched Avengers: Infinity War. This is the culmination of ten full years of Marvel films and it has become one of the most anticipated films in recent memory. I just watched it and I have the exact same feeling I had back as a high school junior reading Infinity Gauntlet for the first time.

The basic plot of Avengers: Infinity War is Thanos is searching for The Infinity Stones that are scattered all around the galaxy. His goal is to use the power of the Infinity Stones to eliminate half of the universe’s population and only the Avengers and the other Marvel Cinematic Universe’s heroes stand in his way. Honestly, that’s all I can really say as this is a SPOILER FREE review. It may seem strange that I can’t get into the plot all that much as this is “just a comic book movie.” But trust me, that barebones description of the plot I just gave is all I can really say without spoiling the surprising deep and twist-filled story of Infinity War. You know all your previous conceptions and predictions that you may have developed in your head from watching the trailers? Throw them all away because they’re probably wrong! Avengers: Infinity War is a very unpredictable movie but in a good way.

I should have guessed that the film would have a very complex and layered plot as it was directed by The Russo Bros. This is the same duo that directed the mind-bending and  layered Captain America: The Winter Soldier and Captain America: Civil War. They do a great job of adjusting your expectations of what a comic book movie should be here as well. However, they do so while adjusting to varying and sometimes disparate tones based on the characters that are on screen. It’s serious when it needs to be serious but still humorous and lighthearted when necessary. The Russo Bros. do a great job balancing out the tone throughout the film, however, the overall tone does feel rather heavy. Not DC Extended Universe movie gritty but Avengers: Infinity War does feel darker than most of the other Marvel films.

One of my biggest concerns I had with the lead up to Avengers: Infinity War is the huge cast of characters it was going to have. Almost every major characters that has appeared in the Marvel Cinematic Universe for the past decade is in the film. That’s a lot of characters! I was concerned how they were going to make them all feel like they were necessary to the overall story. While Infinity War does focus on just a few main players to move the story along, the rest all do play significant roles and they do get involved in action sequences in a major way. Some character do get more screentime than other but everyone does get their moment to shine. 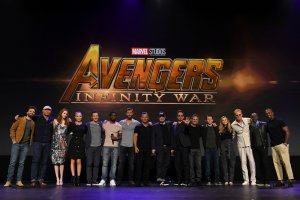 Oddly enough, the character that really gets the most time in the limelight is the film’s villain, Thanos. In fact, although the film is called Avengers: Infinity War, I actually think a more apt title would be Thanos: Infinity War because it does feel like it’s ultimately the Mad Titan’s story. It used to be that the Marvel Cinematic Universe had very lame villains but times seem to have changed as we’ve gotten some really great bad guys with depth such as Ego from Guardians of the Galaxy Vol 2, Killmonger from Black Panther and The Vulture from Spider-Man: Homecoming. I guess we can now add Thanos to this rather short list of great Marvel villains. He’s not a bad guy just for the heck of it. He has motivations and he’s doing what he’s doing for the sake of the greater good… in his mind anyway.

A lot of if also has to do with Josh Brolin’s performance. Josh Brolin’s performance manages to shine through and hit you with a fantastic and, sometimes, emotional performance. Brolin does make you feel empathy for Thanos. While you may not agree with his methods, you do manage to see his point of view and a lot of that is because of the way Brolin acts. That’s not to say that everyone else’s performance isn’t good. Honestly, they’re all really good. Robert Downey. Jr. is still the perfect Tony Stark/Iron Man. Chris Evans manages to convey Captain America as the heroic soldier that he is. Chris Hemsworth still gives Thor the stature than only a god should have. Everyone is spot on in their performances but that’s partially because they’ve been playing those roles for the longest time. Josh Brolin’s performance is astonishing because, while we have gotten glimpses of him in other Marvel movies in the past, he does a tour de force here in Avengers: Infinity War and there were moments when I forgot Thanos is a fully CGI character.

Then again, it does help that the visuals and special effect are believable most of the time. While the special effect were mostly great, there are some shots that, if you look close enough, look rather weird. One specific thing I can mention are the creatures that form the bulk of Thanos’ army. They don’t look terrible but they look rather generic and not all that detailed if you really stare at them. With that being said, the rest of the visuals are great! All the costumes are on point and the sets look fantastic. I would really love to name some specific locations but I can’t because this is a SPOILER FREE review, remember? I will say that I fully believed that the characters were there, even if those locations are very exotic, to say the least.

I do have a few gripes with Infinity War, though. A lot of the action sequences do use “shaky cam,” which is something I don’t really like. The Russo Bros. have used “shaky cam” before in the previous Captain America films so I kind of expected it. It does seem as if they didn’t rely on it as much here. There are some action sequences, like the really huge battles, that don’t use “shaky cam” but, when they need to shoot the fights up close, that when they bust it out. It’s jarring to say the least. Also, there’s a good amount of exposition and reveals that do come out of nowhere. Once again, I can’t go into specifics but I did find these moments a little too convenient for the plot.  You would think that, after ten years and almost twenty films, Marvel would have laid out these breadcrumbs in previous installments? In the grand scheme of things, these are minor issues and don’t really enjoy from how good the film is.

Avengers: Infinity War was a great film and I am eager to watch it again soon. Like my teenage self after reading the Infinity Gauntlet, I was stunned at how good this movie was and I left eager to see what the Marvel Cinematic Universe will be doing moving forward. I had high expectations for this movie and they were met and then some. Looking back at what I wrote, I do see that some of the things I’ve written down seems rather vague. Well, that’s the problem with SPOILER FREE reviews. I can’t really say the things I want to without giving specific details as to why I really enjoyed it. Consider this a very strong recommendation that you should go out and watch Avengers: Infinity War. Like what I did with my friend who loaned me that comic book so many years ago, you’ll thank me later for the strong suggestion to go see it.

Have you seen Avengers: Infinity War? What did you think of it? Let me know in the comments section below!