I’m so tired of losing. I’ve been playing Street Fighter V for the longest time and I’m so tired of going online and losing. I won’t say I’m a scrub as I can definitely still win some matches but I’m using Vega, the claw wielding Spanish ninja/matador. It always seems like an uphill battle and I have to work at least twice as hard to get my wins. My win-loss ration is around 50%, which is okay but, man! there are so many times when I feel I have to do so much more to get those wins while my opponents can pummel me into the ground with less effort on their part.

There’s always a lingering feeling that I would win so much more if I wasn’t so loyal with Vega. I actually remember winning so much more (and easier) when I tried using Guile for a while. However, I got bored with the character since I would play an extremely defensive style with him and just hold down-back for the majority of the match. I eventually switched back to the low-tier Vega but I know my win record would be substantially better if I went with someone like Urien or Abigial or any of the other top-tier characters. I have much more fun playing as the narcissistic masked bullfighter but I definitely would have much more fun if I didn’t have to do so much to get those victories.

If you think I’m just complaining that Vega is low-tier, I’m not the only one. I haven’t seen that many pro players use him or, if they did use him, they don’t get as many wins as you never see Claw (as he’s called in the fighting game community) in practically any Top 8 matches. Someone even made a parody trailer for him showing off some of the things that make him a low tier character.

The video above does show a lot of the problems the character has but I do feel there are so much more! Capcom has been buffing out Vega in increments but they just aren’t enough. While I’m no expert in fighting games or Street Fighter V for that matter, I do have a lot of experience playing as Vega since he’s the one I’ve been using most of the time in Street Fighter V, I can give my impressions as to why he ranks so low in the tier lists and give Capcom a few suggestions on how to make him a much better character overall. I’m also going to try to be as fair as possible because, while I want Vega to be a much better character, I don’t want to give him too many buffs that he becomes top tier. I just want him to be competitive, okay?

One of Vega’s biggest problems is he has very few defensive options, especially when it comes to dealing with jumping opponents. They have made his crouching heavy punches, both in claw and clawless stances, and his standing heavy kick better at sniping opponents out of the air but they still suck really bad. There are just some jumping attacks, such as Blanka’s jumping heavy kick that will snuff out any of them! Also, they come out at an angle, meaning he can’t tag crossup attacks. His best way to counter jumping attacks is to take to the air himself and perform an air-to-air move but that impossible if the opponent jumps in with a meaty.

The weird thing is that Vega should have a really good anti-air move with his heavy Aurora Spin Edge as it moves him back and its upward hitbox is good. Too bad it comes out so slow! You usually have to do it preemtively to get this to hit opponents clean out of the air because it takes a while for Vega to twirl around and swipe with the claw. Why doesn’t Capcom just make the the heavy version of the Aurora Spin Edge come out much faster so it can actually work as an anti-air properly? Right now, it’s almost useless as it doesn’t even hit standing opponents! So, shouldn’t Capcom make it function as his main anti-air then since that’s what it’s supposed to be in the first place?

I’ve yet to have seen someone use this move in an actual match.

One of the most frequent reasons why I lose with Vega is that he doesn’t have any solid means of escaping pressure. That’s because he doesn’t have a single invincible move. Some of them are projectile invincible but they won’t get him away from someone pummeling him close up. In fact, it seems like Vega is only one of two characters without an invincible attack, the other being Balrog/Boxer who got his Turn Around Punch nerfed. His V-Reversal doesn’t help Vega here as he does a backflip. This is supposed to get him out of danger but, in the corner, it’s useless.

You may think I would want to make Vega’s Bloody Rain, invincible on startup as he’s one of the few characters who’s Critical Art can be snuffed out with a hit. While I would want it to have lower body invincible at the start, giving it full invincibility would be too good as it comes out really fast and has really good range. Instead, I would think the EX Aurora Spin Edge would make a better invincible move. It looks like the starting frames would make an excellent wake up move.

Despite supposedly being a nimble character, most of Vega’s normals and attack come out slow. He does have great movement speed and his attacks feel awkward because they don’t match his speed. His light attacks have 3-4 frame of startup but his medium and heavy attacks are at around 6-8. Because of how slow his medium and heavy attacks are, he can generally only frame trap into his light attacks. This makes it hard for Vega to keep the pressure up and makes it much easier to reset into neutral when facing against him. Capcom can fix this by giving him a little more block stun with some of his attacks. Since Capcom initially designed Vega’s clawless form to be his more offensive and combo heavy style, giving him more block stun on something like his standing medium kick or his standing heavy punch when he doesn’t wear the claw on his hand would make him more capable on keeping the pressure.

Vega also has a command throw while in clawless form but, to be honest, it is the slowest of all the command throws in the game. Once again, it’s odd that it doesn’t come out fast considering he’s supposed to be agile and quick but Vega was never known for a grounded command throw anyway. I would be fine with it but I am miffed that Capcom didn’t do anything with the EX version besides a damage buff vs the normal versions. It’s infuriating because everyone else’s is throw invincible! They should really consider making it throw invincible in a future update to even out the EX command throw playing field.

Last but not the least, the thing Capcom really needs to fix with Vega are how his hitboxes don’t match up with his animations. It just looks dumb! They give Vega a claw and you would assume he gets a whole lot of range but, at times, it’s a detriment as his opponents can punch him in the claw! The claw also doesn’t really poke out as far as it looks like it should. Same thing can be said for his low kicks as well! Because of this mismatch, Vega’s normals borders on the ridiculous on how ineffectual they look! 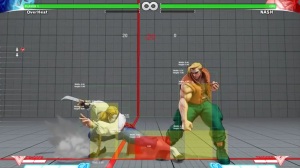 HOW THE HECK IS THIS KICK NOT CONNECTING?

These are just a few things that make Vega generally a low tier character. There are other things that I would love to change about the character. I would love it if he can cancel his Wall Dive into his V-Trigger or make it possible for him to retrieve his claw and mask if they get knocked off. But the list would be incredibly long. Right now, I think these are the biggest issues I have with Vega and, if Capcom does address them, they would just make him mid-tier… which I would gladly take right now!

Who’s your main in Street Fighter V? How would you buff him? Let me know in the comments section below!

One thought on “Episode 252: Why Vega is Low Tier in Street Fighter V (and How to Buff Him)”