Remember when the first trailers for the live-action Suicide Squad came out and people were incredibly hyped for it then it turned out it was more of the same mopey tone the other DC Extended Universe films had? Remember when fans thought it was going to be a fun and exciting movie but it turned out to be a rather mediocre film? Thankfully, DC hadn’t decided to trigger the bomb in the heads of Task Force X members are the failed live-action version as they decided to give the team one more mission with Suicide Squad: Hell to Pay.

Although Suicide Squad: Hell to Pay has been made available via digital download for a while now, the Blu-Ray version won’t be released until next week. So, if you’re really waiting for the physical copy and you don’t want to know anything about what happens in the film, don’t worry. This will be a SPOILER FREE review.

Suicide Squad: Hell to Pay takes place within the DC Animated Movie Universe. In fact, the plot is somewhat connected to the events of Justice League: The Flashpoint Paradox. Anyway, Amanda Waller assembles the supervillain crew of Deadshot, Harley Quinn, Captain Boomerang, Killer Frost and Bronze Tiger to retrieve a mystical object. Unfortunately, it turns out other supervillains also are searching for the same item and it becomes a wild chase around the Midwest to find it. Now, it sounds like I’m talking about a totally different film than what the trailer. After all, the official trailer makes it seem that Waller sent out Task Force X to do the seemingly impossible mission of assassinating the immortal tyrant, Vandal Savage. But trust me, the actual plot of searching for some magical Macguffin is so much better as it allows Suicide Squad: Hell to Pay to do something the live-action movie should’ve done: inject a little levity into the proceedings.

In fact, the film mostly resembles the old cartoons mixed with a road trip with film noir sensibilities. However, I mostly liken the overall plot like something like shows GI Joe and even Superfriends where the good guys and the bad guys have to rush to secure some item or items before the other team can get them. It’s incredibly simplistic but that’s part of what made it a joy to watch. When Suicide Squad: Hell to Pay follows the main plot and the trials and tribulations the characters have to go through to obtain the item, it’s a hoot and a half. It’s incredibly satisfying seeing all these villains interacting with each other and struggling to get along. There are times when it does veer off course in an attempt to flesh out a couple of Task Force X’s members and this does bog down the film a bit but not to a point where it becomes annoying.

The simple story allows a lot more time to get devoted to the characters and, boy, are there a lot of them! Besides the aforementioned Task Force X and Vandal Savage, other villains like Silver Banshee, Count Vertigo, Blockbuster, Knockout, Professor Pyg, Tobias Whale, Black Manta and even the little known criminal duo of Punch and Jewelee make an appearance!

Don’t get used to seeing them, though! A good chunk of them will bite the dust in some pretty gruesome ways by the end of the film’s 91-minute runtime. I was actually very surprised with all the character deaths! Okay, maybe I shouldn’t have been shocked as this is called “Suicide Squad” and it got an R-rating, after all. I will give props to DC for having the guts to depict some gristly deaths on screen. There are some times when the camera would pan out, though, but the level of violence that managed to get on screen is pretty spectacular. Despite some frequent flashes of blood and gore, the fight scenes are rather hit-or-miss but mostly really good. There are some really great action scenes here and there. They’re all laid out really well and easy to follow. I will say that I was disappointed with the final battle as it didn’t have the weight and the frantic action of the earlier scenes.

Besides the violence, another reason why Suicide Squad got an R-rating is the smattering of scenes of the sexual nature. In fact, the animators managed to sneak in a frame or two of animated female nipple in one scene. It does come off as gratuitous, however, as it seems it’s just there for fans watching it to second guess themselves and question if they just saw a quick flash of animated nudity. Oh, it’s definitely in there but, if you really examine the nipple, which I have for the purposes of this review (cough, cough), it looks like an afterthought added to cause controversy. 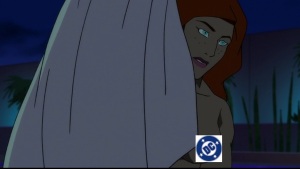 You have no idea how long it took me to capture this one frame for this review!

Although Suicide Squad: Hell to Pay sounds to be a true blue adult film thanks to the sex and violence, it isn’t. There are some scenes that are downright hilarious! In fact, there were moments where I genuinely laughed out loud. The overall mix of cheeky humor and seriousness was just right. Not all of the jokes hit their mark but they mostly land. I honestly would love to mention the funniest scene of the film but it’s linked to the actual Macguffin and it’s a weird direction for a character and, since this is a SPOILER FREE review, I just can’t. However, I will say the joke comes out of nowhere and hits hard thanks to a rather silly take on a rather serious DC character.

The voice acting is mostly solid and believable. Christian Slater does a great job of voicing Deadshot here. Initially, I didn’t like his performance as, well, he sounds just like Christian Slater. But, a good 10 minutes in, I settled down and got used to it. It certainly helps that he delivers the lines with some panache that fits the gruff nature of Deadshot. Vanessa Williams does an admirable job of portraying the now slimmed down Amanda Waller. While I still prefer the overall toughness that CCH Pounder gave the character in the Justice League animated series, Vanessa Williams is a great second choice, overall. Billy Brown and Liam McIntyre play Bronze Tiger and Captain Boomerang, respectively, and they really do great jobs on bringing them to life. However, the standout performance comes from Kristin Bauer van Straten who plays Killer Frost in the film. Her performance as the exasperated, cynical supervillain is just superb. It does help that Killer Frost does get a lot of the best lines, though.

Unfortunately, there are some vocal performances that just didn’t work. The guys that did the voices for Vandal Savage and Reverse Flash just never clicked with me. But the most disappointing performance comes from Tara Strong as Harley Quinn, however, I can’t really put too much blame on her. I grew up watching Batman: The Animated Series and, to me, Arleen Sorkin was the voice of Harley Quinn.

Now, I really like Tara Strong and her other voice acting performances. She had taken up the mantle for the character for a while and I didn’t mind it when she voiced Harley in Batman: Arkham video games. In Suicide Squad: Hell to Pay, she just didn’t seem to bring her A-game as she sounds like someone struggling to imitate Harley’s signature squeaky voice. It certainly didn’t help her that the character mostly got throwaway lines and cringey ones at that. In retrospect, it’s just okay but I expected more from her.

Despite the somewhat hairy voice acting and some meandering points in the film, Suicide Squad: Hell to Pay is the Suicide Squad movie that DC should’ve made when they were planning out the live-action version. The overall simplistic plot makes it easy to digest and the film’s gore allowed the villains to be villains, which is what Task Force X is supposed to do in the first place. Suicide Squad: Hell to Pay is a great movie film and it may even be my favorite film set in the DC Animated Movie universe so far. I wouldn’t mind going to hell and back to watch it again.

Have you seen Suicide Squad: Hell to Pay? What did you think of it? Let me know in the comments section below!

One thought on “I’ll Review Anything: Suicide Squad: Hell to Pay (Spoiler Free)”