As much as I like Star Wars: The Force Awakens, I will be honest in saying that it is essentially a retelling of Episode IV: A New Hope with new characters. It’s still a good movie but you can’t help but think Disney played it safe to guarantee fans will love the first film of their new trilogy of films. This is why I was rather concerned that they would do the same thing with The Last Jedi. I was fearful that Episode VIII would just be another repeat of The Empire Strikes Back. My fears were totally unfounded because I would say The Last Jedi takes the entire franchise into uncharted territory because it does a lot of things you wouldn’t expect from a Star Wars film. And that’s a good and refreshing thing.

Since The Last Jedi does do a ton of things differently from other films in the franchise before it, it would be incredibly cruel for me to reveal even the smallest of details. While it will be difficult, don’t worry. This will be a SPOILER FREE review.

The Last Jedi takes place almost right after the ending of The Force Awakens. The First Order is on the hunt of The Resistance. Rey manages to find Luke Skywalker on a desolate planet and tries to bring the only remaining member of the Jedi back to the fight. And that’s pretty much all I can say about the overall plot of Episode VIII without this review being spoiler free. In the broadest of terms, the overall flow is good and most of the subplots are good. The best thing about the overall story is that it’s definitely unpredictable. There are more than just a few twists throughout the film and its this unpredictability which held my interest for most of the film and kept me hooked throughout the film’s surprisingly long 152-minute runtime. I say “surprising” because I didn’t even notice that I was watching the film for more than 2 hours! I was that engrossed!

One of the best thing about The Last Jedi is how things move along. Every plot thread feels woven into the greater story and there is hardly a wasted moment. Either something is pushing the story along or pauses to give some development for the characters. With a film that’s jam packed with characters, both good and bad, this is impressive as the main players gets their own arc and even some personal growth as well. This is also helped by some really good performances from every one involved.

We only got to see Luke Skywalker at the very end of The Force Awakens. In The Last Jedi, he’s at the forefront of the story and is in a good chunk of the film’s runtime. Mark Hamill’s performance as the last remaining Jedi Master is perfect. It shouldn’t be a spoiler to say that Luke is a little more than conflicted in returning to the fight, which is stark contrast to when he was a brash, optimistic young padawan in the Original Trilogy. But Hamill makes it work with an unbelievable performance filled with emotion while still retaining the things that made him likable in the older films.

The Last Jedi is also notable for being Carrie Fisher’s final performance before passing away and it is really bittersweet to see her once again as Leia Organa. Like Luke, she isn’t the same brash leader of the rebel forces in Episode VIII. She is much more wisened and is more of the guiding light for the entire resistance. Carrie Fisher’s acting is much more subdued but works really well and she’s the highlight of every scene she’s in.

The rest of the cast also does a phenomenal job. Daisy Ridley’s Rey is still as charismatic as she was in The Force Awakens. Oscar Isaac’s Poe Dameron has lots more to do this time and, thankfully, his performance as the cocky, young Resistance pilot is really good. Adam Driver’s Kylo Ren is much more menacing this time around and actually feels like a major threat instead of the somewhat bumbling emo brat he was in The Force Awakens. John Boyega does try an admirable job as Fin but, unfortunately, his performance never really clicked with me. Maybe that’s because Fin’s story arc is linked with the most boring parts of The Last Jedi.

Now, this isn’t really a spoiler but every other character is given a somewhat meaty subplot. You have Rey trying to form a connection with Luke. There’s also Kylo Ren’s attempts to crush the rebellion to gain favor with Supreme Leader Snoke. You have Poe figuring out the best way to outmaneuver The First Order before the latter can destroy the Rebellion. In The Last Jedi, Fin is paired with a new character named Rose with the mission to find something. His mission doesn’t lend to that much growth of his character as well, which makes it feel a little bit useless. Don’t get me wrong; what Fin is doing is connected to the overall story but it just wasn’t done in an interesting way. Fin’s journey isn’t all that endearing and the location where Fin attempts his mission also looks unimaginative and uninspired. You’ll understand what I mean when you see the film.

Thankfully, the rest of the visuals look fantastic. Practically all of the places they visit totally feel like they belong a long time ago in a galaxy far, far away. The special effects are really well done here. Remember how fake Supreme Leader Snoke looked in The Force Awakens? Well, in The Last Jedi, he looks like a fully realized character! I do kind of wish he was just a guy in makeup but the way they rendered him on screen was really well done. Even the little porg creatures, which I thought would be incredibly annoying, looked really adorable and cute. I wasn’t the least bit annoyed with them. In fact, I had the opposite reaction when seeing them in the film! I actually want one! 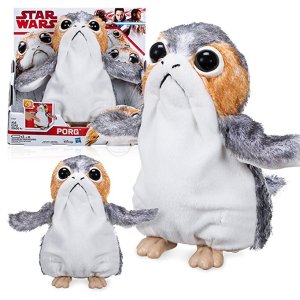 It’s not just the special effects that make The Last Jedi look good. Rian Johnson, the man who both wrote and directed The Last Jedi, does a lot of things right with how each shot is framed as well as picking just the right colors to be featured in each shot. He manages to aim the camera at just the right angles to make almost everything look interesting. Yes, even the boring Fin scenes look interesting! There are more than just a few shots in the film that are going to be iconic images in the future. If this is how Rian Johnson is going to perform with the next Star Wars Trilogy (which he’s already been signed to do), then I’m confident the franchise is in good hands.

Star Wars: The Last Jedi is a great film but it’s definitely not a standalone film. You have to have watched at least the Original Trilogy and The Force Awakens as they do reference the older films… but then again, who hasn’t in this day of age? Episode VIII is a blast. My only misgiving is that we’ll have to wait until 2019 before we get to see Episode IX. It’s going to be a long two years…

Have you seen Star Wars Episode VIII: The Last Jedi? What did you think of it? Let me know in the comments section below!