Finally! Capcom is finally giving fans a proper Arcade Mode in Street Fighter V! That’s something I’ve always wanted in the game but it’s something that’s supposed to be expected, right? Well, better late than never! It’s coming out in Street Fighter V: Arcade Edition and it’s going to coincide with the launch of the game’s Season 3! Along with some new characters, Arcade Edition is going to make some major tweaks to most of the characters, apparently, as everyone in the current roster will be getting new V-Triggers along with some extra gameplay changes.

While that’s enough to get fans excited, Capcom won’t stop there. As this is a new season, they’re probably going to go through the whole dance of rebalancing the game. This time, I think it’s important they do so as these new V-Triggers may be game changers. Also, they do need to make some characters stronger by buffing some of their attributes and moves and nerf some of the stronger character to make them not as “overpowered” as they are right now. In my opinion, I think nerfs are terrible but necessary at times in a fighting game. With that in mind, I don’t want them to nerf any Street Fighter V character to oblivion so, instead of just focusing on what moves to weaken, they will be a corresponding “buff” as well. See? I can be fair!

Anyway, let’s go with my suggestions on what moves should be “nerfed” and what updates each character will get to compensate for it!

This is probably one of the most feared normal attacks in all of Street Fighter V. Urien’s standing Fierce Punch may not be the fastest heavy attacks in the game but it certainly has a lot of things going for it that makes it one of the best buttons in the game. First, it’s got tremendous range, much further than most normal attacks out there. It’s hitbox is also rather large and, as it’s a heavy attack, it gets priority over light and medium buttons. But the thing that makes it scary is its ability to cause a Crush Counter. If you get Crush Countered by it, be prepared to eat massive damage from Urien’s rather simple bread-and-butter combo that will carry you to the corner. 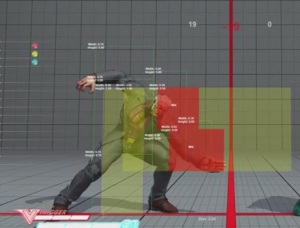 My “nerf” suggestion would be to change its Crush Counter properties from a stagger (that leads to the aforementioned massive combo) to a knockdown that hits the opponent into the air a little bit. This will allow Urien to juggle his opponent with something like his forward medium punch for a reset, crouching heavy kick to knock the opponent down or, if he was charging back, knock him forward with a Chariot Tackle. This will still allow Urien to use the move to carry the opponent into the corner and still cause some mixups to keep the move effective as a footsie tool.

While not as terrifying as Urien’s current standing Fierce punch, Akuma’s crouching Fierce punch is still scare inducing for most players and is actually better in a couple of ways. It doesn’t reach as far but it comes out faster. Also, it stays out longer, making it an incredible meaty attack. Finally, it’s plus on block, making it possible for Akuma to use it as a pressure tool. You know what? Maybe it is better than Urien’s standing Fierce punch! 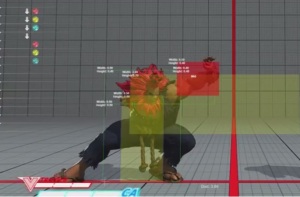 And Akuma’s hurtbox is lower than the hitbox? Wow!

Like Urien, what makes Akuma’s crouching Fierce punch the frightening move it is is it’s ability to cause a Crush Counter that leads to massive damage. So, I would want to see the Crush Counter property of this move be altered into causing a knockdown state as well. However, to make the move still be useful, I would modify the move so that you can cancel it into special attacks. I know Akuma already has got a lot of combos but, with this change, he should be able to do things with it, like cancel into a fireball or Dragon Punch.

3) Balrog’s invincibility on Turn Around Punch

No one really feared Balrog’s Turn Around Punch all that much… until people started using it. It may seem like the TAP is a terrible move since you need to hold down two punch buttons for a short while to execute it, essentially making those attack buttons useless while you charge up the TAP. But the rewards can be high as this is an incredibly good move. It causes lots of damage, is safe on block and in invincible on startup no matter what level you charge it up to.

The reward for using this move is just too high while the risk is too low. I would slightly nerf the length of how long this move is invincible on start up just a smidge. Just reduce the Turn Around Punch’s invincibility a couple of frames and it should be okay and Balrog players will still be able to catch players trying to hit him with a meaty attack. I would even go so far to make it throw invincible but that would be too much, right? To counterbalance this nerf, make it faster to charge up on the higher levels. Right now, it takes 16 seconds to charge it up to level 5 and 24 seconds to level 6. That’s a long time! So long that I don’t think anyone has ever charged it up to those levels in an actual match! Maybe reduce the higher levels by a couple of seconds would make it better?

The Devil Reverse, by itself, isn’t that scary of a move. If you have a good anti-air attack, you can actually hit M. Bison out of the air cleanly with the proper timing. It’s risky though because, if you trade with it, you’ll eat a knockdown, giving M. Bison the advantage. The thing that makes it difficult to deal with is the Head Press, the move M. Bison has to do before he gains access to the Devil Reverse. The Head Press is practically impossible to air-to-air it if you jump forward at it. It also tracks you down pretty well, making it an excellent way for M. Bison to close in on the opponent.

While the Head Press is a good move, the ability to go into the Devil Reverse makes it terrifying. M. Bison can control his trajectory while doing this move. It also must be blocked standing and, if you do block it, M. Bison lands and can continue the pressure. How advantageous it is depends of various factors, like how deep the move hit and the angle he got in. Either way, M. Bison is safe and is free to do blockstrings to continue the pressure or even go for a throw.

I used to call this move Psycho Chop!

Not even Vega’s best angled Flying Barcelona Attack is advantage on block as M. Bison’s Devil Reverse! So, I propose a compromise that the Devil Reverse be just as advantageous on block as Vega’s Flying Barcelona Attack. It’s only fair, right? But, to once again give a positive to taking away the block advantage, let’s give M. Bison’s a buff. My suggestion is that the Devil Reverse does a little more damage overall so that there is some reward for using the move even after lessening the block advantage.

In my opinion, I think Guile is an “honest” character overall. You can play his offensively and defensively and all of his attacks are really great at controlling space. But his rather low health and stun balances this out rather nicely. However, there is one of Guile’s moves that I think is too overpowered and, oddly enough, I may be on the minority on this because I don’t see anyone complaining about it. The move in Guile’s arsenal I have a beef with is his forward+Roundhouse kick AKA the Reverse Spin Kick AKA the Upside Down Kick. 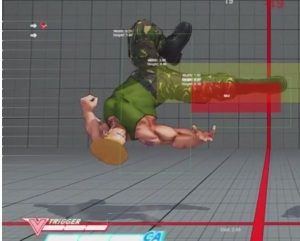 How Guile does this move is beyond me!

It looks really weird and impractical in a real fight (I wanna see this done in an MMA match!) but it’s one of his best normals for a variety of reasons. You can’t hit Guile with a low attack while he’s in the middle of the animation and you can’t throw him, either. If you do, it’ll count as a counterhit, enabling Guile to land a combo. Also, the Reverse Spin Kick, even if not done as a counterhit, does enough hitstun for Guile to recover and chain a light attack afterwards, which can still lead to a combo. Oh, and while it’s negative on block, it’s safe so you can’t counterattack if you block the move.

It’s kind of ridiculous that a move that’s invincible from throws and low attacks is so safe. This is why I want the Reverse Spin Kick unsafe to light attacks when blocked. This will make the Reverse Spin Kick not as abusable as it is now. To compensate for the added risk, let’s up the reward for actually connecting with the attack by adding more active frames to it, making it easy to use as a meaty. In fact, make it so that a properly timed meaty will make it safe on block.

What nerfs and modifications would you like to see for some of the Street Fighter V characters? Let me know in the comments section below!