Justice League has been out for a while now and its box office take hasn’t exactly been super. It managed to make $96 million over the weekend. That’s not exactly chump change but, as this was supposed to be DC’s version of another certain film franchise where the best superheroes team up, it’s still kind of shocking that it make more than $100 million. Still, I watched it and, while I thought it was fun but essentially just okay, I walked away with more than just a few questions in my head.

These questions didn’t really make Justice League bad nor did they disrupt the overall flow of the movie. However, they do still nag in my head. So, just to put my mind at ease, here are just a few of those questions…

Oh, and SPOILERS AHEAD!

1. Why is Superman angry at Batman when they fought side by side against Doomsday?

We all know that Batman was kind of a dick to Superman in Batman v. Superman: Dawn of Justice. Then again, Supes was also being a jerk and an idiot because he never tried explaining that Luthor had kidnapped his mother during the fight. Still, at the end of the day, both Batman and Superman got along when Doomsday showed up and Batman realized he and Superman have the same mother…’s name. Yeah, it’s still stupid even up to now that Batman would stop because of the uncanny coincidence that their mothers just so happened to share the same name.

Both parties did join forces with Wonder Woman and they actually seemed to get along then. So, after Superman was resurrected by the Mother Box, why the heck did he forget that and tried to kill him?

I get that the newly revived Man of Steel was basically working on instinct. He may have just been recalling that Batman was partially to blame as to why, you know, he died. But still… he didn’t go totally ballistic when Cyborg shot at him. He also seemed to recognize Diana/Wonder Woman. Heck, Batman even called him Clark, showing that he’s someone he trusts. Also, isn’t Supes supposed to have a super-memory or something? It just seemed weird.

Oh, and speaking of them using their first names…

2. Isn’t anyone concerned about keeping each other’s secret identities a secret?

Being someone who grew up reading comics and watching cartoons, it initially didn’t strike me as odd that Batman would call Superman “Clark” or Wonder Woman “Diana.” They’ve done it so many times in the comics and the cartoons. It’s a sign of trust as each of them know each other’s secret identity.

Yet, during the resurrection scene, it did start to bother me. You see, when any Justice League member would call one another by their real name/secret identity, they’re usually the only one’s in earshot. Meaning, there aren’t other people who may find it odd that a giant man dressed like a bat would call the resurrected Last Son of Krypon a human sounding name like Clark.

The clincher was when Lois Lane went to the Superman memorial to try to talk some sense to Superman before he killed Batman. The instant she stepped out of the car, she muttered Clark’s name… right in front of a couple of policemen. Sure, the cops won’t understand that Superman is Clark Kent but I don’t think blurting out their real names in public is a good idea.

Then again, it’s gonna be hard for the cops to put two-and-two together since Clark Kent is dead and buried. But that does lead to another question…

3. How can they explain Clark Kent rising from the grave?

At the end of Batman v. Superman: Dawn of Justice, they show that Superman gets a big hero’s burial and a monument is built in his honor. They then cut back to Smallville where a humble funeral service is held for Clark Kent. Bruce Wayne explains that the folks in Metropolis are burying an empty box. It then shows Lois Lane throwing in some dirk into Clark Kent’s grave and, just before they cut to black, they show that a little bit of that dirt levitates off Clark’s coffin.

So, Clark Kent is dead. He’s dead and buried, right? So, how can they explain him walking around at the end of Justice League? Didn’t they find it weird that he’s up and about from after dying? It’s easy to explain why Superman came back to like: he’s Superman! He’s an alien and no one knows what he can or can’t do? But normal Clark Kent? If he dies, you expect him to stay dead and not just rise from the grave without raising some questions!

I guess they can explain that they didn’t properly identify the body and they can explain that the guy buried in Clark’s grave wasn’t him. But it would be too much of a coincidence for Clark Kent to just resurface just around the time Superman comes back to life, right? It wouldn’t be a problem if Clark wasn’t buried so they can use the explanation they used in the comics where they said Clark Kent was trapped in some underground bunker when Doomsday happened. But it would still be difficult to explain the damn body in Clark Kent’s grave!

If there’s one thing I know about Batman, it’s that he hates crime. I mean, you gotta be if you dedicate your entire life to being a vigilante who dresses up as a giant bat to strike fear in the hearts of criminals. I can’t really recall when Batman would let go of a criminal unless there were extremely huge extenuating circumstances behind the criminal activity.

But he did let a criminal go during the opening minutes of Justice League, didn’t he?

Now, Batman did track down and scare the criminal after the latter broke into a house. And he did it because he figured out that Steppenwolf’s Parademons were attracted to the scent of fear. He essentially failed to capture the Parademon that showed up and, after having a rather friendly chat with the burglar, he leaped off the building to do whatever a Batman does at night, which is capturing criminals.

I fully expected Batman to have, at the very least, put the fear of God (or Batman) in the criminal before he let him go but he didn’t. He didn’t even tie him up for the cops to arrest later! I know Batman’s became a little more lighthearted after Supes’ death. But letting a criminal go is just so un-Batman-like!

5. Where are the Mother Boxes now?

The basic plot of Justice League is that Steppenwolf is trying to bring all of the three Mother Boxes that were left on Earth during his first failed invasion together to make the planet more like Apokolips. Cyborg and Superman manage to tear apart the Mother Boxes before this could happen. The Justice League manage to make Steppenwolf feel fear so the Parademons attack him. The villain boom tubes out and the tendrils sprout flowers for some silly reason. Yay. 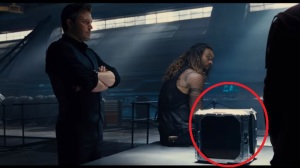 But what happened to the three Mother Boxes?

These three Inifinity Ston… I mean, Mother Boxes were responsible of almost destroying the world. Wonder Woman even calls them as something that’s just pure power. I fully expect them to keep track of where they are right now. But, during the ending moments of Justice League, we never really see what happened to them. Did the Justice League collect them or did they just fall by the wayside? If they did, what did they do with them? Did they split them up between the Amazons, Atlanteans and themselves like what happened in ancient days? Or did the Justice League decide to keep them to make sure they won’t fall into the wrong hands? I mean, there wasn’t even an after credits scene showing the Mother Boxes final fate!

And speaking of after credits scenes…

BONUS: Who won the race between Superman and The Flash? 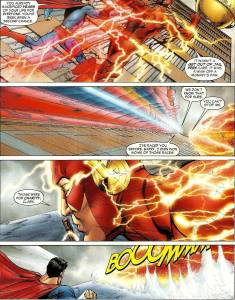 I know it’s supposed to be one of DC’s greatest mysteries: who would win in a race between Superman and The Flash? But, in my opinion, The Flash would be faster than Superman. It’s like that Bruce Lee saying: “I fear not the man who has practiced 10,000 kicks once, but I fear the man who has practiced one kick 10,000 times.” The Flash is only good at one thing, and that’s being really, really fast. He’s gotta be better than Superman based on that, right?

Then again, it’s supposed to be a debate.

Any other question that popped into your head after watching Justice League? Let me know what they are in the comments section below!