Thor: Ragnarok is Marvel’s next wide release and thanks to great teasers and trailers, the buzz for the film is very high. The look and feel of the movie is much different from the two prior Thor films and that’s great, because Thor: Ragnarok really needs to be successful.

First off, Thor: Ragnarok is coming head to head against DC’s Justice League film. Sure, the two films aren’t releasing at exactly the same time with Thor: Ragnarok coming out in the U.S. on November 3 and Justice League two weeks later on November 17, but DC’s release is sure to cut the former’s legs short once it comes out (people who haven’t seen Thor: Ragnarok may opt to see the newer, bigger superhero film). And despite the critical failures of Suicide Squad and Batman V Superman, people ARE going to see Justice League. So Thor: Ragnarok needs to make as much money as it can before Justice League comes out, otherwise they risk the chance of underperforming in the box office.

Despite the early buzz for the film, Thor movies have never really been huge money makers for Marvel. Here’s a list of the U.S. box office earnings of each of the Marvel Cinematic Universe movies:

Both Thor and Thor: The Dark World are in the bottom half of the list, earning more than only three MCU films: the underrated Captain America: The First Avenger, the problematic Incredible Hulk, and Ant-Man which starred a C-list Marvel superhero (no offense to Ant-Man fans, but we have to be real here). Despite the popularity of The Avengers, Doctor Strange made more money than Thor’s second outing. If Thor: Ragnarok once again falls in the lower half of the list, Marvel’s producers may start to sour on the franchise – especially since the franchise isn’t wowing the critics either. 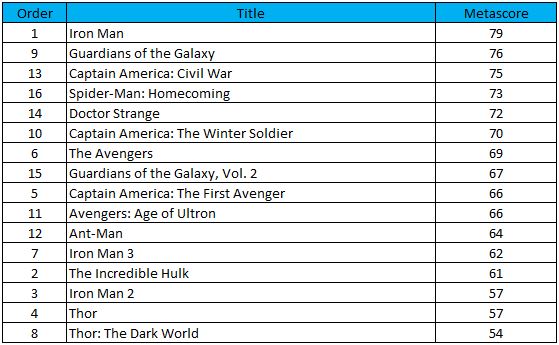 Metacritic ratings of each of the Marvel Cinematic Universe films, ranked from best to worst.

Before compiling Metacritic’s ratings, I never thought that critics as a collective group considered either of the Thor films to be much worse than Iron Man 2 or The Incredible Hulk but the numbers don’t lie. Thor: The Dark World’s rating is a big surprise to me, given that it is part of MCU’s Phase Two – the phase that gave us Captain America: The Winter Soldier and the first Guardians of the Galaxy film. At that point, you would want to believe that Marvel had already perfected their superhero film formula but that wasn’t the case with The Dark World.

So now we have a sub-franchise within the MCU that’s both “below average” when it comes to financial and critical performance – if you were one of Marvel’s film producers, is this a franchise that you would want to continue working on? One may be quick to say that if Thor: Ragnarok doesn’t do better than its predecessors, then just stop investing in the character and move on to your more successful ones. But who else aside from Thor does Marvel have?

Looking at the pre-Avengers movies, we’ve got the Hulk which probably won’t get the solo film treatment for as long as Universal has ownership of the character’s film rights. We’ve got Iron Man and Captain America, which have been Marvel’s most successful solo characters but are also played by actors who have been giving mixed signals about continuing in their superhero roles after Avengers 4. Based on what both Robert Downey Jr. and Chris Evans have been saying in interviews and on how their characters’ storylines have played out in the MCU, I think it’s highly unlikely to see both characters continue to have a significant part of the MCU after Avengers 4. I can even say that Marvel may drop the Avengers brand after the fourth film – who else is there to carry the Avengers flag aside from Iron Man and Cap?

Past Phase Three of the MCU, who else is there? The Guardians of the Galaxy franchise will probably be part of Marvel’s flagship characters. Spider-Man is shared between Sony and Marvel and we don’t really know how the two studios will be collaborating after the second Spider-Man film. The Doctor Strange and Ant-Man are also part of the bottom half of the MCU films in terms of box office earnings, and the Black Panther and Captain Marvel properties are untested. Aside from Marvel’s space-faring super team, there’s really just Thor that’s left to carry the MCU torch.

If Thor: Ragnarok doesn’t do well and Marvel’s producers sour on the franchise, will the Guardians of the Galaxy be enough to keep Marvel on top? Will Marvel Studios continue to work with Robert Downey Jr. as a flagbearer? Will Chris Evans be convinced to continue as Steve Rogers despite his waning interest in acting and his desire to pursue a career in directing? Or will we see any of Marvel’s second generation of movie franchises perform as well as the Iron Man/Captain America/Avengers properties?

I think that the success or failure of Thor: Ragnarok will heavily influence how the MCU Phase 4 will become. Ragnarok in Norse mythology is the name for the event that marks the end of their mythical cycle. Will this hold true for the MCU and spell the end of the Thor franchise? Or will it mark the recreation of the franchise and put Thor as the MCU’s flagship character? We should know by the end of this year once the dust settles between Marvel’s final 2017 superhero film and Justice League.

One thought on “Why Thor: Ragnarok Needs to be Successful”