Hooboy! That was… a movie.

I just came back from watching Transformers: The Last Knight and it was an experience, I’ll tell you that! The movie was terrible on so many levels. The story was a trainwreck of story elements that just didn’t make sense. The action, although over the top to the nth degree, just failed to excite me because I’ve seen it all happen in the other Michael Bay Transformers movies before. There are characters that are in it that don’t do anything.

In all honesty, it’s difficult for me to really articulate why The Last Knight is so bad. It also feels like an hour too long. Partially, it’s because there are already so many reviewers out there ripping the movie apart that I don’t have to do it! 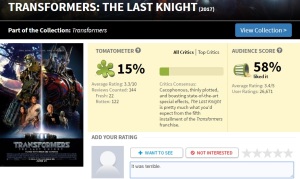 15% is a pretty high rating for a movie as bad as this.

It’s easy to talk crap about the movie but it does seem like the series has more than just a decent following. There are rabid fanboys for the live action Transformers out there that will try to bite your head off if you say the films are terrible! And I actually heard the packed movie house cheer and clap several times throughout the film’s 5-hour… well, it felt like 5-hours to me… runtime. So, that got me thinking. Was there a way to restructure my brain to actually think this was a good movie? After all, some of the audience members did. And I think I actually came up with several ways to do just that…

1. Revel in its Anti-Social Justice Warrior way of thinking

In one scene, one of the Autobots (I can’t really tell them apart anymore) loses his “male computer chip” or something along those lines. He then becomes an overly exaggerated caricature of a homosexual while people talk about what gender is to a Transformer. That’s just one of the scenes where Michael Bay just lets out the inner racist/sexist part of himself. To be fair, The Last Knight isn’t the worst offender but it’s still an offender, nonetheless. And it’s quite refreshing, actually.

Come to think of it, I think a lot of movies in the ’80s and ’90s were like this. Racial stereotypes could be seen in every movie. The women were just sex object for the male leads to woo and make whoopie with. This was considered normal then because the general populace was blissfully unaware that this was supposed to be bad. You could produce and film a movie like Revenge of the Nerds, where the heroes, the Nerds, have a stereotypical asian and homosexual in their group and it was totally fine for them to storm a sorority house, film them and even sell naked photos of some of the women to win a contest during this time but you can’t do that today. Oh, and the lead Nerd pretends to be the boyfriend of one of the girls and has sex with her… which would be considered rape by today’s standards… but it’s all okay because she enjoyed it?

I’m not offended by Revenge of the Nerds because it’s out of touch with how the world works today. It’s a relic of its time but it does feel refreshing that movies like that didn’t care about being socially responsible or offending anyone. It just wanted to be as entertaining as it could be. Michael Bay is probably doing the same thing with his films like The Last Knight. He doesn’t care if the film is totally tone deaf or if it will offend the social justice warriors of today. He’s just making the movie the way he wants it. It may be offensive to some but, hey, I guess some people like the offensiveness?

2. Just Turn Off Your Brain and Enjoy the Spectacle

Now, I’m not saying the people who are enjoying this are dumb…

The Last Knight is another Michael Bay film jam packed with slow motion shots and big explosions. It looks beautiful and everything looks exciting and tense but I just don’t feel any emotion while all of this is happening because I’m not invested in the story or the characters. Things just sort of happen for seemingly without rhyme or reason so I can’t really say I liked watching these scenes.

But maybe that’s the problem. I’m a little too invested with wanting my movies to have a coherent plot or fun characters brimming with personality. After four Transformers movies with bland characters and jumbled stories, why did I think The Last Knight to be any different? In retrospect, it was incredibly naive of me to expect that and that’s probably one of the reasons why I didn’t like it: I was thinking while watching The Last Knight. There is some entertainment to be found with all of the explosions and how bombastic the action was. That opening scene with King Arthur’s knights looked really good. That scene where the evil Optimus Prime battled Bumblebee was probably the most exciting part of the movie as you could actually see what was going on for the most part.

But it was difficult to get into the other action scenes because the story was a incoherent jumble of loose threads. I mean, sometimes characters just pop in for no reason! For example, the young girl at the start of the film disappears in the middle only to appear near the end. What the heck was she doing for all this time? And what’s with all that gobbledygook Anthony Hopkins was saying regarding Witwickans or something along those lines? I can piece together the story okay but the more I do, the more questions I need to ask because it doesn’t make all that much sense!

I don’t think fans of the live action Transformers films care all that much for things like “plot” or “character.” All they want to see are the slow motion action shots with explosions. It’s not like I can’t watch an action scene without having to know all the nitty-gritty of why their doing the action or what the characters’ motivations are, right? If I just went into The Last Knight and turned off my brain, I probably would’ve enjoyed it a whole lot more.

3. The Last Knight is Like the Power Glove. It’s So Bad.

For those who don’t get the reference, here’s where I got it from…

Thank you, Angry Video Game Nerd for showing me this clip!

But back to The Last Knight! There’s no question that movie is a mess. But that does raise a different question. Is it a hot mess? There is a lot of entertainment to be found in the film… but it just may be for the wrong reasons.

Overall, I would say that The Last Knight is just a really awkward film. The jokes are cringeworthy and sophomoric. The dialogue and script are obnoxiously unrealistic because no one talks like that in real life. And was it really necessary to link the Transformers to the legend of King Arthur… which it turns out wasn’t a legend and is totally real? It’s so easy to make fun of the film because of how stupid it is. In fact, The Last Knight is on the cusp of being so bad that it’s good. There’s just a level of surreal ridiculousness throughout the entire film that it’s almost hilarious. There was a scene in the film where Anthony Hopkins was brandishing a tiny Transformer watch that apparently killed Hitler! How ridiculous was that scene!

It’s quite possible that, in a few years time, people will be saying that The Last Knight might be the best of the Tranformers movies. Not because it has a good story or brilliant acting but because of how stupidily dumb everything is!

But I’m not holding my breath on that aspect.

What did you think of Transformers: The Last Knight? Let me know in the comments section below!

One thought on “Episode 209: Three Ironic Ways to Enjoy Transformers: The Last Knight”