Anyone excited for the Nintendo Switch? I know I am! The house that Mario built just had their big event relaying to the press and gamers all over the world regarding the Nintendo Switch. The actual press conference gave us some really important details, such as how much the Switch is going to cost and what other features the little Joy-Cons have in them. They also revealed some nice little bits of fascinating news like the Switch is going to be region free. Nice to see Nintendo finally keeping up with the times!

The more important details regarding the Switch came after the press conference, when gaming reporters got up close and personal with the console. They were able to ask the Nintendo representatives directly about the things that wasn’t discussed during the press conference, like how long do the Joy-Con controller batteries last (about 20 hours) or what resolution does the Switch output (720p in tabletop mode and 1080p when connected to a TV).

All of this did make me interested in actually saving up and getting a Nintendo Switch once it hits the market in March. However, before I do, I still have some concerns regarding their new system that I would like to see answered…

1) What else can the Switch do besides playing sweet, sweet games?

I find it rather odd that I’m actually asking this question. After all, a gaming console has to be good at one thing: playing games. But nowadays, your video game console has to do a lot more than that. They have to be these entertainment hubs now with the ability to hook up to online video streaming services like Netflix and the like. They have to be able to upload your video game playthroughs on Twitch and YouTube now. They should be able to download the latest music as well. Gaming consoles are much more than just for gaming now.

Because we all need to Netflix and chill?

Right now, Nintendo has been mum regarding any extra services the Switch will be able to do. There is even a thread floating around NeoGaf reporting that the Switch won’t be supporting Netflix, at least right out of the box. I don’t think it’s all that important myself as I don’t stream movies using the PS4 but I have the sneaking suspicion that the lack of other non-gaming services may affect the decisions of some people if they should get a Switch or not.

2) How much will the online service cost?

Maybe I have to take back what I said about how it was a good thing that Nintendo is keeping up with the times now. It looks like the gaming giant will be following in the footsteps of Sony and Microsoft and will now add a subscription fee to their online service. The Nintendo Switch Online Service will be free for a good 6 months or so. Afterwards, you’ll need to pay something to get online. If it makes their online service great, I don’t really have a problem with it. I just think it’s a bummer.

Enjoy it while it’s free, ya bum!

However, Nintendo hasn’t mentioned how much the service will cost. I’m actually worried about this as they may ask us for an arm and a leg just to hook up the Switch to the Internet. I’m probably just being paranoid and they’ll follow the price ranges that Sony and Microsoft have established before. I still won’t stop worrying until they actually announce the price, though.

Nintendo did a good job emphasizing all of the little things the Joy-Cons can do. They can make you feel like you’re stranded on top of a mountan thanks to its HD rumble feature for example! 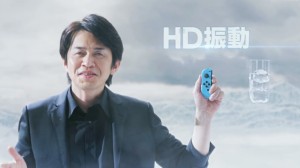 Or have a nice refreshing beverage

All joking aside, the Joy-Con is one of the most intriguing things about the Nintendo Switch. We already know about how you can use them to play either one or two players as long as you share one of them with a friends. But they also talked about the other tech the left and the right Joy-Cons have. Both of them work like individual Wii-motes as they detect movement. The left Joy-Con has a Share button to capture screenshots (and video in the future). The right has the Home button, a sensor to read amiibos and even a infrared camera that can read simple hand gestures. Each analog stick can be pressed in so it can be used as an extra button.

I initially thought those little symbols were just to ensure that dopes wouldn’t try to slide in the left Joy-Con into the right side of the Switch and vice versa. But after pouring through all the available information about the Switch, it turns out they’re a little more than markings; they’re actual buttons!

Don’t believe me? Here’s an actual picture from Nintendo’s official website detailing that those are really buttons!

Close enough for ya?

So, what are they going to be used for? They seem too small to be useful in actual gaming yet positioned awkwardly enough that you might actually press them while during a heavy gameplay session. I’m betting that those are either the sync or power buttons for the Joy-Cons. However, that’s just a guess as of right now.

4) Does the Switch mean the death of the 3DS?

The Switch is a great piece of tech as it’s a weird hybrid of home gaming console with remarkable portability. Nintendo has been incredibly upfront in shoving the Switch’s portability in our face in their promotion materials. So, where does that leave the 3DS, Nintendo’s current handheld system?

It actually looks like the Switch is a little bit smaller than the 3DS XL if the latter is unfolded.

It’s sad to think that Nintendo may actually be inadvertently be killing off the 3DS line with the Switch. On the other hand, is this all according to plan? It is totally possible the Switch will be the successor of the Wii U and the 3DS as the systems threads the needle between being a home console as well as a portable gaming system.

If this is true, that would be a bold but really smart business decision by Nintendo. They would be able to consolidate both fanbases into one gaming unit. There is the pitfall of putting all their eggs in one basket, though. So I’m still thinking that Nintendo will still be able to support both the Switch and 3DS (and its eventual successor) for years to come… for now.

5) Where’s Metroid? And Smash? And what about [insert your game of choice here]?

The Switch will be launching without the support of their mascot, Mario. Super Mario Odyssey will be dropping much later during the holiday season. No word of a new Metroid game, another huge Nintendo franchise. But fans won’t have to wait for a killer app to come with the Switch. Not with The Legend of Zelda: Breath of the Wild being released on the same day as the Switch! It’s a sure bet that this Zelda game will be the system seller of the Switch. I will say the launch library is looking incredibly thin and I can’t say if Breath of the Wild will make up for it. I hope it does, of course. But the launch lineup could’ve been bolstered a lot more.

And this goes beyond their launch lineup. There doesn’t seem like there are going to be too many games that are going to be interesting to me. The Switch’s tech is impressive for sure but, ultimately, a gaming system is only as good as the games it can play. And, besides maybe Zelda and the upcoming Mario games, that seems to be it.

Besides making cool consoles, Nintendo is also known for making really good games. Splatoon looks cool. That new Zelda game looks fantastic. The open world Mario adventure looks to be quirky enough. And that new Mario Kart games looks like it’ll be a great party game. But where are the other big name games Nintendo is known for? How come there isn’t a new Metroid or a new Smash game?

I’ve heard that Nintendo has a lot of third party support. They finally got Bethesda to make a game for them. Sure, it’s Skyrim, a really, really old game, but that’s got to count for something. And Capcom will be making a Street Fighter game. Okay, it’s an updated version of Street Fighter II. But that’s still something, right? I still have to ask where are the other games that’ll turn my head, though. Where’s your Mass Effect: Andromeda? Or your Dark Souls or Dragon Age? Or that killer exclusive title for the Switch that’ll make the Sony and Microsoft fanboys green with envy?

Nintendo will need more than just a great gimmicky console to sell the Switch to gamers. They need to show us, not just a lot of games, but great looking games as well.

I do hope Nintendo answers these questions in between now and when the Switch launches on March 3 of this year. There’s still a lot of time between then.

Do you still have some questions regarding the Switch? What are they? Let me know in the comments section below!