As much as I love the solid gameplay and how Capcom has been trying to regularly add content to the game since it’s release in February of last year. While it managed to recapture the hearts of the hardcore fighting game community, myself included, Street Fighter V wasn’t beloved by the more casual scene and those wanting more of a single player experience. No Arcade mode yet, Capcom? Really?

Even though Capcom said early on they were going to limit the Shoto characters (ie. the Ryu and Ken paradigm) in their latest entry of their incredibly popular fighting game franchise, I guess they needed something big to draw in the less fanatical fans back in the fold. They needed a character that was popular enough for casual fans to take notice. This is probably why Capcom decided to add Akuma to the Street Fighter V roster as the very first Season 2 character.

Even if he is one of the more popular fan favorites, does he play well in Street Fighter V? Is he still the offensive monster that he was in previous entries? And is he different enough from the Ryu and Ken that he feels like his own character? For the most part, that’s a yes to all questions. He’s plays similarly to his Street Fighter IV version in that he controls beautifully and he can definitely throw down but with enough differences from the current Shotos in the roster. There is a whole lot about Akuma though than that.

It took some time for me to get used to Akuma’s new “lion mane” look. Just because he’s focused on being the greatest fighter in the world shouldn’t mean he doesn’t get a trim now and then! But, after the initial shock, I do have to say it does suit the character. It makes him look extremely fierce… like I lion. I guess that what Capcom was going for? 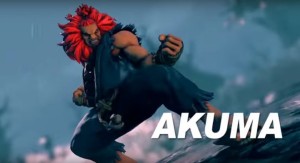 It does make me question why he bothered tying a top knot.

Akuma’s new ‘do already makes him look scary enough. But he becomes downright frightening if he’s on offense! Akuma has always been played as an offensive character and his rendition in Street Fighter V is no different. A really good Akuma player will try to push the offense and try to chip away at his opponent’s defenses until, boom! He gets in and unleashes a devastating combo!

His smothering offense is facilitated by his really solid normal button attacks and intimidating special attacks. Most of his normals are pretty safe on block, making pressuring his opponents into cracking just a matter of time. The hitboxes on his normals also feel rather large and have good range as well and, besides a few exceptions, can cancel into his V-Skill and his special moves, making it easy to confirm into combos.

Speaking of his V-Skill, I have to say it’s one of the most useful one in the game. Akuma’s V-Skill enables him to parry one attack, which is much like Ryu’s. However, you can cancel the parry and perform a counterattack. Depending on the button used after activating his V-Skill, Akuma will either do a quick punch which blows away his opponent or kick his opponent into the air. The kick version enables Akuma to juggle his opponents for more damage as well! This makes this an extremely versatile move with a lot of uses.

Akuma’s specials also are versatile in their own ways. He can throw various kinds of fireballs to control the horizontal plane. His air fireball can cover his jump ins. He can also now do different versions of his Hurricane Kick to facilitate combos and his heavy kick version can work as an anti air but you’d be better off using his Dragon Punch as it’s still one of the most useful anti-airs in the game. He can also confuse opponents with his command jump in as he can use it to execute different attacks. Oh, and his Critical Art may have a rather short range but, as it shoots out a huge pillar in front of him, this can be used as a really damaging anti-air and works well with juggles!

But things get really scary when he activates his V-Trigger! Akuma’s V-Trigger buffs up all of his fireballs and his Dragon Punches. His normal fireballs start up a few frames faster, enabling you to insert in some combos otherwise not possible. His air fireball reverts to his Super Street Fighter II Turbo version as he throws 2 of them at the same time! His Dragon Punch becomes fully invincible at the startup and adds an extra hit as well. Of course, if you just so happen to have a full Critical Art meter, Akuma can unleash his most famous attack, the Instant Hell Murder/Raging Demon. As it dishes out 400 points of damage, it’s on par with Zangief’s own Critical Art as one of the most damaging Critical Arts in the game!

Akuma’s offense is juxtaposed with his low health. At only 875 health and 900 stun, Akuma may be able to dish it out but he can’t take it. It may be an overused idiom to describe him, but Akuma is still the very definition of a “glass cannon.” Also, his teleport, which was one of the most useful means of escape he had in previous Street Fighter games, isn’t that good anymore. it starts up instantly and he can pass through most strikes but it actually looks like you can now throw him out of it if you react to it quickly.

The trick to using Akuma is definitely staying on offense and pressuring them until you KO your opponent. While this may be true for practically all characters, This is more true for Akuma as his low health can make it easy for opponents to make dramatic comebacks if they find an opening and land a damaging combo. If you’re entirely comfortable at bullying your opponent and not letting them breathe to give them a chance to recover, then Akuma is your character. If you’re more of a laid back kind of guy who’s more on reacting and countering your opponent’s moves, you may want to stay away from him. Maybe there’ll be another Season 2 character that would be more suitable to your playstyle.

What do you think of Akuma as Street Fighter V’s first Season 2 character? Let me know in the comments section below!