Well, it’s been a heck of a year for Street Fighter fans! This year’s Capcom Cup just ended a couple of years ago, drawing to a close the first season of Street Fighter V. But just because Season 1 is through, that doesn’t mean we don’t have anything to look forward to. Au contraire! Next year, it looks like it going to be a big year for the Capcom’s flagship fighting series. There’s a whole slew of changes the game is gonna get in Season 2. There are the numerous balance changes for all the characters, some system changes and, of course, the 6 incoming new characters, including the Master of the Dark Hado, Akuma!

But Season 2 has yet to descend upon us, which will try to fix some things that were problematic in the game. According to various blogs and gaming news sites, Capcom is attempting to reduce the input lag even further as well as doing away with the ridiculous anti-air light attacks (thank God!). But, while they’re still modifying the changes and getting things ready for Season 2’s release, I do have some suggestions to make 2017 a great year for Street Fighter V. And, after the rather underwhelming year the game had, it’s gonna need it!

In Capcom’s overzealousness to get the game out for this year’s Capcom Cup season and appease the hardcore audience, they excluded one important thing that makes fighting games fun for the casual audience and the button mashers out there: an arcade mode. Arcade mode may not be incredibly important to the guys and gals that want to pummel other human opponents into submission and conquer the online leaderboards. However, for the fighting game fans who just want to try their mettle against the computer without having to worry about getting a good online connection or gathering a couple of friends for a little one-on-one action, it’s a necessity to enjoy a fighting game. Street Fighter V doesn’t have one, which may be one of the reasons why the game didn’t really sell all that well.

Sure, the game had a single player experience. When Street Fighter V was released, there were the Survival, Trials and the Character Story modes. Capcom eventually added the full length Cinematic Story mode and a CPU Versus mode. Unfortunately, those craving for the standard 2-round matches where you face off against different opponents until you reach the final boss were left out in the cold.

Season 2 is the perfect opportunity for Capcom to finally add an actual Arcade mode. Put in under the Story mode menu and work it so that you can work your way to a final boss. With Akuma returning, it would be so easy to put a buffed out version of the character as the final boss!

Survival mode can be a fun distraction. Okay, Easy mode is a total joke as the CPU doesn’t really put up a fight. Normal mode starts off slow but the computer does put up more of a fight. On Hard and Extreme, the computer just plays things extremely cheap at it just reads whatever you press and does the right counter most of the time. That’s all fine and good. But how come I don’t face any of the new characters? How come I don’t get to fight against Urien, Ibuki, Balrog, Juri, Guile and Alex? Oh, and must I always face off against Zangief after Ryu on Normal Survival mode? Survival mode is okay but, man, is it repetitive if you played it over and over again if you’re trying to earn Fight Money and unlock all the colors!

And that one title for beating Hell!

Street Fighter V should spice up Survival mode by making the characters you face a little bit more random. Capcom should make it possible that you can face off against the Season 1 DLC characters (if you’ve purchased them). They should also make is so that the DLC stages you’ve unlocked can also be in the Survival mode’s rotation. Make it so that it’s unpredictable who you’re gonna face!

Street Fighter V was Capcom’s first try at giving players a full-on cinematic Story mode ala Mortal Kombat. Entitled “A Shadow Falls,” the results were… weird. It’s ridiculous, cheesy, dumb but ultimately somewhat fun. Sure, the actual story of FANG launching orbital satellites to wreck havoc on the world’s infrastructure is ludicrous but, hey! It was a good first try but A Shadow Falls could’ve been a whole lot worse! It tried to mash in all the characters, even the ones that were yet to be released, into the story.

So, what about the new Season 2 characters? Shouldn’t they get their own Story mode as well? I would definitely be up for a Season 2 cinematic story mode that would involve Akuma as well as the 5 completely “new” characters! It doesn’t have to be obstinately long. It could be a much shorter experience, primarily focusing on the Season 2 characters and a few of the old cast who didn’t get to do much during A Shadow Falls. I’m looking at you, Alex!

Who out there has completed all of the trials in Street Fighter V? I’m guessing pretty much everyone has, sans a handful of players who are stuck on Karin’s Trial 6. Don’t worry, we all feel your pain. Getting that Just Frame Tenko and then juggling it into the Orochi can be really rough! But just keep at it! You’ll eventually get it! We believe in you!

Honestly, though, I do wish most of the trials were more difficult. I do like that Capcom only included the more useful and practical combos. Essentially, these are the combos that you would actually be doing during an actual match and none of the incredibly difficult ones that aren’t really optimal for damage. But what now? Now that most of us are done with all the trials, I’m guessing we’re all itching for something a little more challenging.

With Season 2 adding buffs and nerfs to all the characters, there is a chance that some of the trial combos may not work all that well. I’m actually thinking that, thanks to all the changes the characters are getting in Season 2, there will be some new and improved combos inadvertently created! Capcom should get on the ball and discover these new combos and create a whole new list of trials for Season 2! I would also like it if they made a Hard Trial mode for more advanced combos, such as Chun-Li’s most difficult bread and butter combo, her crouching Jab, standing Strong, Crouching Forward into Medium Spinning Bird Kick!

Okay, Capcom. I understand it’s a different revenue stream if you sell out the licensing for the official Frame Data app/book/database. I get that it’s a way to make the fighting more about instinct rather than just numbers and it can be overwhelming to newcomers to look at a table of numbers showing startup frames, active frames, block advantage, etc. However, I would think that a good majority of Street Fighter fans are at least familiar with frame data by now as there are already unofficial guides and videos devoted to analyzing all of this. So, why not include it in the game?

I mean, just because it looks like a lot of figures and data, it doesn’t have to be alienating to newbies who are just starting out. Mortal Kombat X has the frame data readily available. So does Dead or Alive 5. If the other big name fighters are already having this information available within the game, Why not have Street Fighter V follow suit? 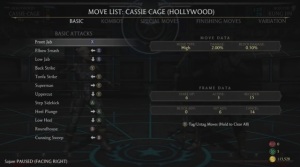 With all the changes each and every character is getting in Season 2, it would be a boon for fans to see all this unseen but important information at our reach at the touch of a button. And, where Season 3, 4 and 5 roll in, the frame data tool would also be updated. It removes a lot of the guesswork when testing new combos as well as understanding which attacks are frame traps, etc.

Well, these are just 5 suggestions and I hope Capcom does take a look at this list. It may be a little too late for these updates to be ready in time for Season 2 as they’ve been probably hard at work for a long time. But, well, there’s always future seasons!

What other changes would you like to see in Street Fighter V in Season 2? Let me know in the comments section below!