The United States Presidential elections over and the surprising announcement that Donald Trump is going to be the next Commander-in-Chief of America. This was a shocker, to say the least! All the news media outlets predicted that his opponent, Hillary Clinton, was going to have a landslide victory over him and most people thought he didn’t have a snowball’s chance in hell of pulling it off. The voters that voted against Donald Trump are unable to fathom why his supporters would elect a man who’s misogynistic, a compulsive liar and has a superiority complex.

Well, DC Comics made Lex Luthor president and people ate it up. So, yeah, if I can believe that Superman’s greatest villain can win the election, I can understand why Donald Trump became president.

It may seem implausible for Lex Luthor to become the President of the United States. Even if you don’t read comics, we all know who the villain is. Lex Luthor is Superman’s greatest enemy. He’s one of the most ruthless bad guys in the DC Comics multiverse, willing to do anything if it will benefit him. So, how did one of comics’ greatest villains become the President?

In order we do that, we have to first look at that version of Lex Luthor: the post-Crisis interpretation of the character. Before the Crisis of Infinite Earths storyline that rebooted the DC Comics multiverse in 1986, Lex Luthor was a brilliant but mad scientist and inventor who would build devices in a big to defeat Superman. This all changed after Crisis. When the DC multiverse got rebooted, Lex Luthor was changed to reflect the most dastardly and evil archetypes of them all: a rich businessman. 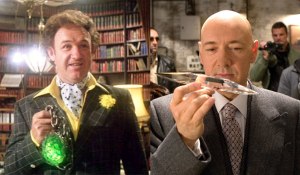 Thankfully, he wasn’t made into an evil real estate agent like in the movies.

The change was extremely drastic for a lot of people who grew up reading the pre-Crisis comics but people eventually got used to it. In fact, it actually made a lot of sense in these modern times. Lex Luthor didn’t need to break out of prison anymore as he had a team of high priced lawyers to come to his defense. He was also rich and influential enough to bribe and blackmail the right people to get him out of sticky situations. And, if all else fails, he can resort to finding a scapegoat and pin his crimes on that unwitting patsy. This made him more than a formidable foe for Superman as, no matter what the Man of Steel did, Lex Luthor would always get away scott-free.

This also had an interesting side-effect to his character. It made Lex Luthor, to many characters in the DC Universe, as an actual good guy! His company, LexCorp, works of different fields of industry and employs millions of people. In order to keep his squeaky clean image, Lex Luthor also had a dozens of charities and he did a lot of philanthropy across the globe. Sure, a lot of them were covers for more of his evil plots, but the general public of the DC universe didn’t know that. All they saw was what a great guy Lex Luthor was and how he’s helping a lot of people!

Then came the No Man’s Land storyline. Gotham City is struck by a massive earthquake, causing the city to fall into anarchy. The United States government declares the city a “no man’s land,” essentially stating that Gotham City isn’t part of the country anymore and abandoning it. Although the city was evacuated, the people who chose to remain in Gotham City had to fend for themselves without the government’s assistance. This didn’t sit well with the majority of the nation as, well, we all know how bad Gotham City normally is; the US government cutting all ties with it simply made things worse!

So, who should step in to help Gotham rebuild? Why, Lex Luthor, of course! To most people, he offered to do it out of the goodness of his heart and because it was the right thing to do. However, Luthor had an ulterior motive. His real reason for helping the city to rebuild is to snatch up as much land as possible under different aliases. Although Batman eventually figured this out and warn Luthor that Gotham City wasn’t for sale, this wasn’t made public and the country believed that Lex Luthor was doing something that the government should’ve done in the first place!

The damage has been done, however. Due to the incredibly unpopular decision of declaring Gotham City a no man’s land as well as the negative public opinion the nation had for the government already, Luthor found a new way to torment his arch-nemesis, Superman. He decided to run for the Presidency of the United States! And, with his popularity at an all time high, thanks to the events of the No Man’s Land storyline, he won! He didn’t need to pay off anyone. He didn’t need some elaborate machine to brainwash the public to vote for him. He won… fair and square!

Now, I don’t think Donald Trump is as evil as Lex Luthor. I mean, he hasn’t tried to blow up cities, brainwash anyone, framing innocents for his crimes or anything like that… at least, as far as anyone knows. Okay, he has said some incredibly insensitive things throughout the entire campaign period and promised to do some actions that seems to not take human decency into account. But he definitely isn’t as bad as Lex Luthor, president/supervillain as of right now!

Much like in the comics, the people have looked at the state of their nation and just couldn’t stomach how the country is being run. And then, like in the comics again, here comes a billionaire who promises to make things great again. A man who has marketed himself as an extremely successful person so he could be a credible choice to run the country. A man that has done a lot of good for the country as well. So, why not vote for him?

Besides, it’s not like the Simpsons predicted something bad will happen if he does become president, right?

Who would you say is the best President of the United States, fictional or non-fictional? Let me know who it is in the comments section below!