A first look into the new Nintendo Switch has the entire gaming community buzzing with anticipation about a product that could change the landscape of video game consoles for the greater good (or at least, better mobility). But whether it lives up to the hype or crumbles under the weight of high expectations, there’s no denying that it is high time for an all-in-one gaming system that is both a TV console and a mobile device at the same time. Heck, we’ve been streaming high-definition mobile phone content into regular LED TVs for years.

Even for someone who is not a hardcore gaming geek like me, the idea of a plug-play-and-go type of device that just happens to be powered by Nvidia technology is too much to resist. I, for one, like the concept enough to be certain that Nintendo’s got my gift-to-self birthday money in March 2017 when they finally release the product to the public.

In the meantime, rumor mills are churning out predictions of existing games that could be released for the new Nintendo. Some sources reportedly confirm that it will have at least one game franchise I’m familiar with – The Legend of Zelda.  I also noticed that the sneak peek trailer featured Skyrim and NBA 2K, which means that the hardware packs the resources needed to run games of that caliber and sophistication. Strangely enough, a new Mario game is still under debate. For some reason I thought that was a given. Nevertheless, the buzz about what games will be ported or developed for the system has prompted me to take a digital walk down memory lane, and think about the games I enjoyed as a child, and even all the way up to the most recent past.

While it would be nice to have these older games (or their iterations) find their way to the new Nintendo, this article is not so much a wish list as it is a retrospective. As I eagerly await the release of the most anticipated video game system today, I look back at parts of my life in which video games played a part. Below is a list of six memorable video games, in the order in which I played them.

1. Pac-Man (1982) – One fine Christmas day when I was about 4 years old, my father, who worked abroad for most of the year, took home an Atari system with a built-in Pac-Man game, thus sparking my interest in video games early in life. We instantly became the coolest kids in the neighborhood. Although I  was not allowed to play by myself back then, I remember quietly watching my then 8-year old brother and his friends take turns at trying to beat the game as it got harder and harder, the ghosts faster and faster, until eventually when they got tired, they would let me have a go at it. 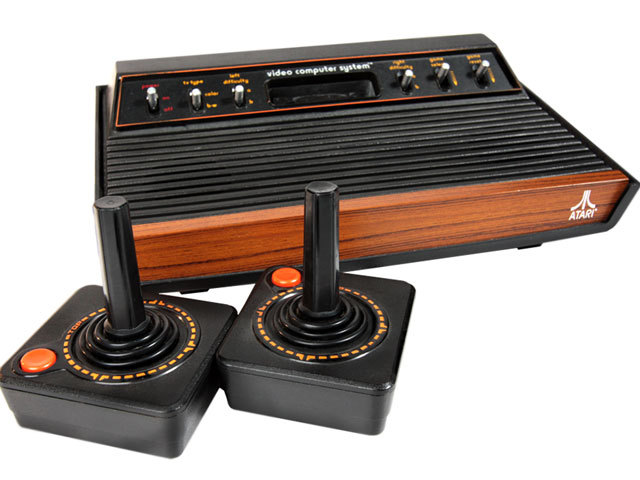 Yes, they were as bulky as they looked. (Source: https://www.avgn.wikia.com)

Out of all the elements of the game, it was the sound I loved the most. I liked hearing the steady gob-gob-gob sound Pac-Man made as he devoured all the little “vitamins” that got in his way inside his labyrinth; the wonk-wonk-wonk that meant he had temporary power to chase the ghosts and eat them; the victorious ringing that comes at the end when the level is complete. I loved the game so much that for my birthday that year, I asked for a Game & Watch, my very first handheld video game. 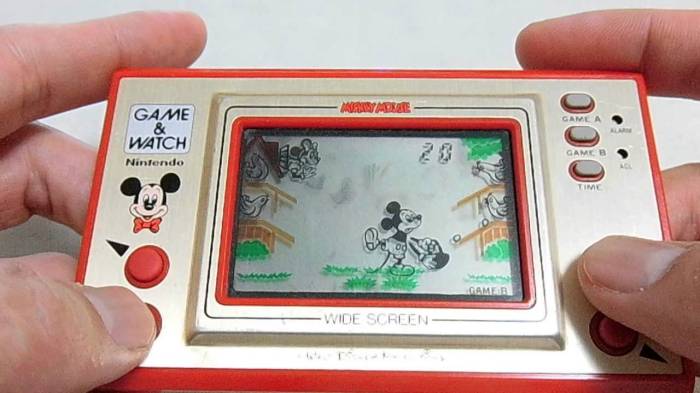 2. Super Mario Land (1989) – When my parents split up before I turned seven, my father took us back to his hometown, a small island in the province of Romblon called Sibuyan, where there was no electricity or running water. I lived with my grandparents until I was twelve, and had the most idyllic childhood – we had a farm, my friends and I played outside to our hearts’ content, and my father operated the only oil-powered generator in town so we could watch movies with other families on our Betamax for a couple of hours a week.

Life was good, but it got even better when one of my friends, the barangay captain’s son, got a new Game Boy, and introduced me to Super Mario and his mission to save the Princess. It was a good thing that the owner didn’t really like playing the game too much, because for a rental fee of P5.00 a day, I had the Game Boy all to myself. Even back then, the Game Boy was already a pretty sturdy device – I must have beaten Super Mario Land five times before the four double-A batteries even began showing signs of giving up. I was so addicted I began taking the game to school, and my teachers actually let me play during classes (to be fair, I was a minor genius in grade school and didn’t really need to listen all day to understand my lessons). 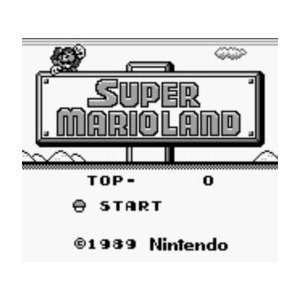 3. Jackie Chan’s Action Kung Fu (1990) – A retrospective with video games would not be complete without the Family Computer. I was already a teenager living with my mom when her boyfriend got me a second-hand Family Computer, but it was such an old broken-down system that it could only play one game. I wasn’t particularly into Jackie Chan or Kung Fu, but was still very much into video games. In fact,  the reason they got me the console was because I was spending way too much time and allowance in video game rental shops (yes, there were already Fam Com and SEGA rental shops back then). 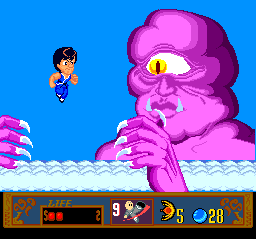 It took me days to figure out that I was supposed to jump-kick the crap out of that eye to get out of the level. (Source: http://www.hardcoregaming101.net)

It turned out to be a very good game. The player controlled Jackie Chan, who kicked and jumped his way through five levels of challenges set in the colorful city of Hong Kong, each one ending in a boss battle. But more than the average platformer, it challenged the player to figure out how to kill the bosses, because they could not all be killed in the same way, very much like the Zelda boss battles of today. This was years before you could go online to look for walk-throughs, so when you get stuck, you’re stuck for a while. I didn’t know back then that this game was also considered to be one of the most graphically accomplished games of its time.

4. Ico (2002) and 5. Conker’s Pocket Tales (1999) – Fast-forward to an era when video games became as much about the plot of the story as they are the gameplay. I had just graduated from college and in my first job, and one of the first things I bought with my call center agent salary was a PlayStation 2, along with some of the popular titles at the time – Resident Evil, Jak and Daxter, and a charming RPG action-adventure three-dimensional platformer called Ico. Unlike the dystopian and straightforward zombie spot-and-shoot gameplay of RE, Ico was set in a misty, seemingly peaceful and ethereal castle from which the eponymous protagonist needs to escape, bringing with him the Princess Yorda. In order for Ico to succeed in his kidnapping scheme, the player needed to help him solve puzzles and kill shadow armies along the way. It was the first of its kind that I had played at the time. The puzzles could get pretty tricky, because while Ico needed to take the princess with him everywhere, her range of motion was limited to walking and jumping short distances, and so Ico needed to do much of the work, or figure out how to make the journey easier for her (I don’t think this one was very popular among feminist groups). Nevertheless, there were portals or doors that only Yorda could unlock, so the relationship was still symbiotic.

I never got to finish the game, and up to this day, I wonder if I could have beaten it had I continued playing. At the time, I was already spending most of my days at wo 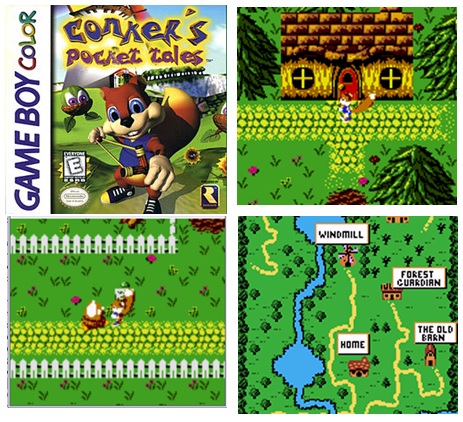 rk, and needed a mobile console to feed my gaming needs. Thus I bought my first Game Boy Color, and started playing Zelda, and a cute little puzzle-platformer called Conker’s Pocket Tales.  The game starred Conker the Squirrel who needed to travel through different levels in a map and solve puzzles in order to save his girlfriend Berri, who was kidnapped by the Evil Acorn. The game play was very similar to Zelda, except that the main character was a little bit more agile – he could walk, run, push blocks, jump, and use a slingshot. In one of the more difficult levels, he even raced a banana boat! I did eventually conquer the game, but not before spending what seemed like hundreds of hours in the process.

6. Monster Hunter Freedom Unite (2008) – It wasn’t until sometime in 2011 that I discovered the Monster Hunter franchise via its Monster Hunter Freedom Unite iteration, which was, I would argue, one of the best video games in the handheld consoles environment. The objective of the game was to build the strongest warrior possible by forging weapons, armor, and accessories made from parts of several different monsters that the player hunted, killed / captured, and harvested for parts during various quests. Apart from the quests, players also needed to maintain a farm and fish for ingredients for potions and elixirs that they could use during the hunt.

I spent about 700 hours of game time on my PSP for this, and went on to play two more generations – Monster Hunter Portable 3rd, still on PSP, and Monster Hunter 4 Ultimate on the new Nintendo 3DS XL. The last one was particularly memorable, as I was pregnant when I started playing it, only to be advised to stop by my doctor because the game became too stressful. At one point, after hunting a monster for almost an hour, my character got killed instead. I got so upset I actually had a spotting episode and had to go to the ER. I did pick it up again later in my pregnancy when my condition was less delicate, but played at a more relaxed mode online with other people, or with my then boyfriend and baby daddy. 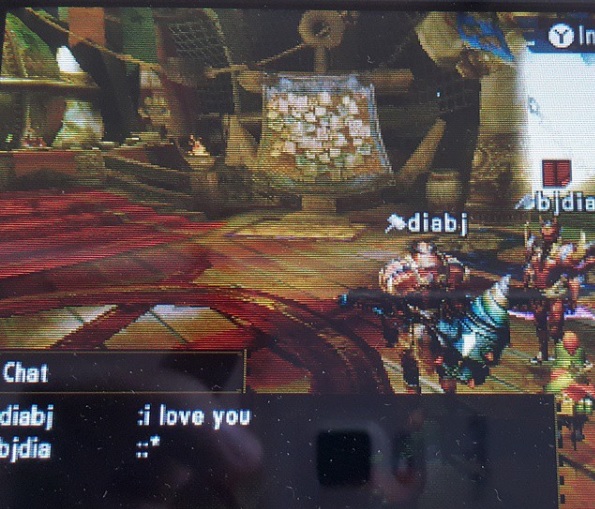 Flirting before the hunt.

Next to books, video games have been a constant part of my life since I was a little kid, and with the upcoming release of this amazing console, I don’t think motherhood will change that fact too much.

Were there video games that you played growing up which you consider more memorable than others, and in what way? Tell me about them by commenting below.