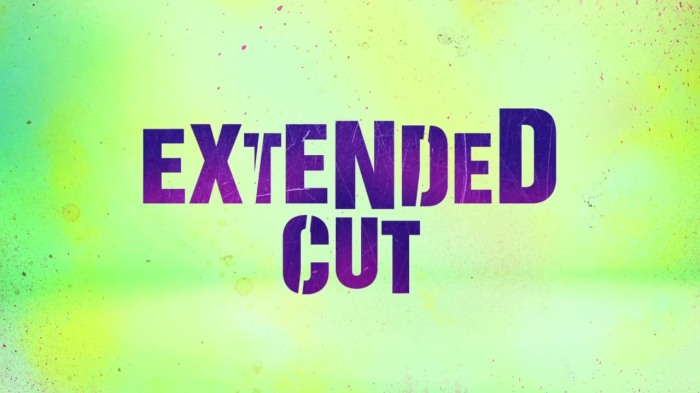 On October 5, the Suicide Squad Facebook page has released a short video teasing the extended cut for the movie. As much as I wanted to feel excited about it, I can’t help but roll my eyes instead. I have read somewhere that Batman v. Superman did get a little better after the extended cut treatment, but not to the point that it becomes a good film. For some reason, and I hope I’m wrong, it’s starting to become apparent that this is the approach DC is taking with these films, releasing a watered-down version of whatever it is they are trying to tell for the theatrical versions, with the intention of releasing extended cuts later on.

If you ask me though, am I willing to spend more time in something I did not like the first time around? I’ll probably think more than twice. It already felt like I was cheated on the first time I saw it, and it would be so terrible if it disappoints me once again. I guess what I’m trying to say is, if that was your plan all along, then you better make sure that you first hook your audience enough for them to feel ecstatic about an extended cut. I think the approach however seems to be, “deal with the crappy one first, because the extended cut is awesome”. If that’s the case, then might as well skip the theatrical version and just wait for the extended version. The thing is, I love going to the movies. Sitting in front of a television or a laptop? Not as much.

I would like to set as an example The Lord Of The Rings Trilogy. Now that’s how you approach a story of such magnitude. To be honest, with the number of characters, set pieces, events and action, LOTR would have been a lot more challenging in terms of film editing compared to Suicide Squad, and somehow, it still ended up with a cohesive, easy-to-follow story that audiences fell in love with. There are still a few people I come across with who hasn’t seen the extended cuts, but still feel that the theatrical versions were already great. I know it’s apples to oranges, but what I am referring to is the mindset in editing these movies, in such a way that the theatrical versions can stand on its own, even if the extended cuts aren’t released. In fact, even with the epic scale and grandeur of Return Of The King, it remains the weakest of the three theatrical versions. However, the extended cut did manage to make the story more cohesive and it made much more sense, ultimately making it the best of the series. If Suicide Squad manages to do even half of what the extended cut did for ROTK, then I think it would be just fine. But I’d be honest, do I expect the SS extended cut to redeem the movie? It’s highly unlikely.

So will you be interested enough to watch a longer, “better” version of the movie? If I will be asked that question, I probably will. However, looking back at the theatrical version, the things I didn’t like about the movie seems irreparable by any extended cuts. Although the performances are strong, it is eclipsed by the spotty story and under-developed characters. It’s quite difficult to imagine what scenes would turn the movie around from the initial cold reception it had received from fans and critics alike. But going further into the DC Cinematic Universe, I could only hope that the filmmakers are keen enough to hook audiences with their stories, rather than banking on the coolness factor of the movie alone. Maybe if the audiences get invested more on the characters and their circumstances, then they will be likely more interested in spending more time when the extended cuts are released.

Are you down for a Suicide Squad Extended Cut? Let us know your thoughts in the comments section below.