If it weren’t for the SNES Virtual Console games for the 3DS, I would have missed out on one of the best games of the 16-bit era. So when Super Metroid became available, I got it right away and I completed my first playthrough of it last week. Does Super Metroid deserve the critical acclaim that it received? How does it hold up to today’s standards? 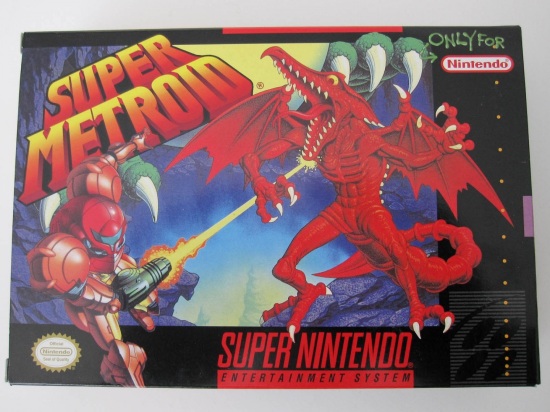 Super Metroid was first released for the Super Nintendo Entertainment System more than two decades ago.

Super Metroid is the third game in the Metroid franchise. It is a side scrolling platform game that focuses on level exploration, a subgenre now referred to as “Metroidvania”. I skipped the first two Metroid games because of graphics and I wasn’t disappointed – Super Metroid is quite impressive visually for a 16-bit game. The graphics are very detailed – from Samus’ gigantic sprite, to the different levels/areas of the game, and the different enemies and bosses. Samus, in particular, is very well animated. She even has a different set of sprites for facing left and right, unlike most games of the time which used mirrored sprites. Simply put, Super Metroid’s visuals hold up quite nicely, even if it’s already more than 20 years old.

As for the sound, Super Metroid has one of the best soundtracks of all the Super Nintendo games that I’ve ever played. Its themes effectively match whatever is going on – whether it’s a boss battle or simply exploring levels. I especially love the boss battle theme as it really drives the urgency of the situation home. Not a flaw of the game, but more of the Virtual Console version of Super Metroid, is the overall volume of the game. It’s too low, you’ll really need a pair of earphones to fully appreciate it. I noticed the same issue with my Virtual Console copy of Super Punch Out!!

The story of Super Metroid is very straightforward and the setup of the opening cutscenes will tell you all you need to know; the Space Pirates have captured the last remaining Metroid larvae and it’s up to Samus Aran to get it back. There’s not a lot more to it; the entire game revolves around what Samus has to go through to get her hands on the Metroid larvae again, but you really don’t need more than that. Similar to the original Metroid, Super Metroid is set on planet Zebes and I like how this effectively made Super Metroid a remake of the original while making it a sequel at the same time. The in-game events depict Samus’ trials effectively and there are specific moments, like the frantic opening sequence, that are really immersive.

Super Metroid though, at least from my eyes, is not a perfect game; I have a few complaints about the game’s design. For the most part, it’s designed really well – Super Metroid addresses or improves upon the flaw of its predecessors. It now has an in-game map to aid all the exploration and backtracking that you need to do in the game. There are several missile and energy refill stations scattered throughout the stages and if that isn’t enough, the power up respawn mechanics have been fixed – enemies will now spawn power ups that you need, e.g. energy if you’re not at full health and so on. There are also enemy spawn points that were clearly put there as a “power up refilling area” which made Super Metroid more accessible than it’s predecessors.

A couple of control options ave also been added to ease gameplay, such as having a button for switching weapons and buttons for diagonal aiming (which is excellent for midair and on the move combat). And Samus has a couple of moves at her disposal too, like the aforementioned ability to aim and shoot diagonally, double jumping, wall jumping, and the ability to run. And the controls, for the most part, worked well – it’s very easy to control Samus and get her to do stuff.

This is more of a flaw of how the Virtual Console version was implemented; SNES Virtual Console games are exclusive to the New Nintendo 3DS and yet they don’t make use the additional buttons of the upgraded 3DS version. The default weapon function could have been mapped to either the ZL or ZR buttons, freeing up the Y button for switching weapons.

My second complaint is about one of Samus’ special abilities, and one that’s necessary in order to beat the game: the Space Jump. The Space Jump is an ability that allows Samus to do another jump in midair if she’s in the middle of a spin; she can’t Space Jump if she’s not spinning. She can do multiple Space Jumps, which is actually needed to access some areas of the game.

Space Jumps are so hard to execute, I started to loathe sections of the game where it was needed.

The problem with the Space Jump is the timing of how it’s done. You have to do it after Samus reaches the peak of her jump which is in itself very unnatural, and I found it hard to determine the exact window on when to do the jump for the Space Jump to work.  It was very frustrating and when I did some research online, I saw that I wasn’t the only one having problems. It was so hard for me to execute that I started to hate sections of Super Metroid wherein Space Jumping is necessary. There are other special moves that are also hard to do like Wall Jumping, but they aren’t required to progress into the game so I felt that these were nice advantages to have for anyone who is able to learn how to do them.

My final complaint about Super Metroid involves a certain point in the game where you can no longer backtrack and get hidden upgrades. Referred to as the “Point of No Return”, it did not affect my initial playthrough of Super Metroid as I had gotten enough health and missile upgrades and I was able to beat the game. But I had only gotten 78% completion and wanted to try for a higher completion rating; I was surprised when I couldn’t. But I’ve read about some people who made it past that point with much less upgrades that I had; some eventually had to start from the very beginning because they couldn’t get through the final parts of the game. And that, I think, is a poor design choice that would result in a bad experience for anyone who is unfortunate enough to get there.

All in all, Super Metroid is still a really good game. I loved almost every minute of my experience playing it, despite it being more than two decades old already. I don’t think it’s as perfect as some fans claim it to be, but the great design choices far outweigh whatever flaws I saw in it. I had enough of a good time to consider playing through it again at least a second time, even if that means going through the blasted Space Jump sequences all over again. I think Super Metroid still deserves its place in all time video game rankings – maybe take it down a few ranks lower.

And let me just add this – I think that a 2D Metroid game is still viable today. The last time we saw a 2D Metroid was a decade ago, when Nintendo released Metroid Fusion and Metroid: Zero Missions for the Game Boy Advance. Nintendo’s been making different Kirby, Mario, and Donkey Kong 2D style action platformers and these have been selling quite decently, so I’m curious as to why they’ve been holding back on another 2D style Metroid. I think the 3DS is a great platform for another 2D Metroid; clearly Nintendo doesn’t agree.

Have you played Super Metroid? What did you think about the game? Share your thoughts by leaving a comment or two below!