“Do you want to watch X-Men: Apocalypse this weekend?”

I was surprised when my girlfriend asked me that question. I didn’t know that X-Men: Apocalypse was opening that week. What’s even more surprising is my response:

“We can wait until next weekend, we don’t need to rush.”

This is coming from a guy who saw Avengers: Age of Ultron and Captain America: Civil War on opening day. A guy who saw Batman V Superman: Dawn of Justice and most MCU films during their respective opening weekends. A guy who is eagerly awaiting the release of Suicide Squad and Doctor Strange. A guy who is clearly a comic book movie fan. Why was I so indifferent to X-Men: Apocalypse?

After much thinking, I think I’ve narrowed what’s causing my lack of interest down to a few reasons and I’d like to talk about them today. Note that I’m not trying to criticize the X-Men film franchise, I’m simply trying to explain why I feel this way. I understand that not all comic book franchises should have the same feel as the Marvel Cinematic Universe and I’m not lobbying for the X-Men universe to be similar.

Oh yeah, I’m not going to discuss X-Men: Apocalypse in detail but I will mention a few minor spoilers so don’t read any further if you haven’t seen that film yet and you don’t want any spoiler information. With that said, let’s begin.

One of my biggest issues with X-Men films is how they tend to focus the spotlight on a few select characters, leaving little screentime for the other characters. The first trilogy of films spent a lot of time on Wolverine and I understand why – he’s simply the most popular X-Men member. And Hugh Jackman did really well with the role, so he deserves the limelight.

But that left me wanting to see more from the other characters. Cyclops really faded into the background by the second film (limited to a cameo in the third film thanks to Superman Returns) and Storm never really felt relevant.

Wolverine and Mystique have gotten a little too much of the screen time for my tastes.

As for the reboot films, I just think that I’m getting far too much of Mystique. It was neat to see her backstory explored in X-Men: First Class especially since she’s one of the few returning characters from the original trilogy. Well, Jennifer Lawrence became such a big celebrity and Mystique’s expanded role in the subsequent films just feels like the producers taking advantage of her increasing popularity.

I’m sure that there are fans of either Wolverine or Mystique (or even of Jennifer Lawrence) who are happy to see the spotlight linger longer on them, but I’m not one of them. I know that the X-Men films are handicapped by not having enough characters that can lead their own solo films so they have to pick and choose who gets the focus, but I’d still like to see the screen time a little more evenly distributed if the screenplay can accommodate it.

If we base it on review ratings, the X-Men franchise has been inconsistent in terms of quality. I know I shouldn’t base my enjoyment on critic reviews, but I have to admit that my taste for films is generally aligned with the results reported by review rating consolidation websites such as Rotten Tomatoes and Metacritic. It’s not 100% aligned but I really do tend to enjoy movies with higher ratings more. 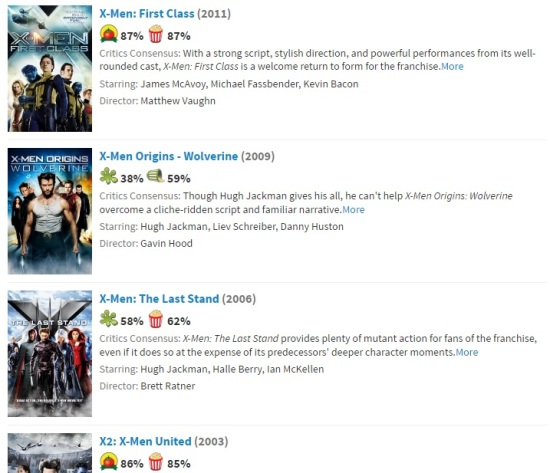 I never know what to expect from upcoming X-Men films due to their inconsistent quality.

Let me go into specifics here – I enjoyed the first three X-Men films but The Last Stand did have issues. But X-Men Origins: Wolverine left such a bad taste in my mouth so I ended up skipping seeing X-Men: First Class, The Wolverine, and Deadpool in theaters. Turns out that First Class and Deadpool were actually good, and I did enjoy Days of Future Past enough to not regret catching it during its opening weekend (the idea of the past and future X-Men teams in one film was too intriguing to resist).

However, the series still hasn’t convinced me to the point of being excited for the next X-Men film to come out and X-Men: Apocalypse, while entertaining enough, didn’t help in that regard. Right now, X-Men movies are still potential hits or misses in my head so I don’t feel the urgency to catch them as soon as they come out.

I hate to compare the X-Men film franchise to the movie juggernaut that is the Marvel Cinematic Universe, but I can’t help it. For several years now we’ve had at least two MCU films each year, and that keeps my interest in that franchise consistently high. I know that it’s normal for a year or two to pass between films and their sequels, but the Marvel Cinematic Universe (and to a lesser extent, Peter Jackson’s Lord of the Rings trilogy) basically spoiled me by giving me at least one movie to watch every year.

As a big fan of the Marvel Cinematic universe, just the past two years was awesome! Captain America: The Winter Soldier, then Guardians of the Galaxy, then Avengers: Age of Ultron, then Ant-Man, and then Captain America: Civil War. I saw all those movies in roughly the same timespan that Fox needed in order to follow X-Men: Days of Future Past with X-Men: Apocalypse. Deadpool, even if it was such a good movie, didn’t help much in this regard because it felt too disconnected to the franchise. Very different from the aforementioned MCU films which maintained this feeling of continuity that keeps me fully engaged in their universe.

Thanks to the box office successes of Deadpool and the new X-Men films, this can potentially improve. Several X-films are in development – the Deadpool sequel, the New Mutants, a Gambit solo film, and of course the sequel to X-Men: Apocalypse. Too bad Fan4stic flopped because it could have boosted this universe.

I love how both Sir Ian McKellen and Michael Fassbender portrayed Magneto. I love the directions that the producers did with the character in all the films, really. I know that he is the X-Men’s greatest foe. But I’m so sick of the character being the bad guy (or one of the bad guys) in almost every X-Men film to date.

The X-Men can exist without Magneto, can’t they?

If he’s not the main villain, Magneto just simply steals the thunder of whoever the main villain is. Who was the bad guy in X-Men: First Class? X2: X-Men United? His mere presence, at least from my perspective, had an impact on how I felt about Apocalypse. I’d like for the producers to give Magneto a rest (or give him his own film) and give all the bad guy screen time to another X-Men villain at least for a film or two.

I like how the producers managed to sweep The Last Stand and X-Men Origins: Wolverine by doing their version of Days of Future Past, but man did this move mess the continuity of the universe up. I know that because the timeline was changed, that we’re going to get a version of the X-Men universe that’s different from the original X-Men trilogy, but there are inconsistencies that stick out like a sore thumb.

I’ll give two examples of what really bothers me the most. First, Angel seemed younger than Cyclops and Jean Grey in X-Men: The Last Stand but because of the time paradox he’s now older than (or at least the same age as) Cyclops in X-Men: Apocalypse? So preventing Mystique from doing what she was going to do resulted in Angel being born earlier (and in England)?

Second is that little teaser of a scene at the end of X-Men: Days of Future Past wherein it looked like William Stryker was able to get his hands on Wolverine, only for a closeup of his eyes to hint that it may have been Mystique pretending to be Stryker. And then in X-Men: Apocalypse we see Stryker actually having Wolverine in custody. Huh?

To be honest, I’m nitpicking here. These details didn’t really impact my enjoyment of X-Men: Apocalypse. But it does affect how engaged I am with the entire property.

What do you think about the X-Men films? Are you a big fan? Tell us why by leaving a comment or two below!