One of the great things about toys is that, unlike children and pets, it’s okay to have a favorite among the ones you have. That’s because every toy collector has that one figure they consider to be their Holy Grail and centerpiece. It’s the figure they’ve always wanted to have. And, for me, that would definitely have to be the Hasbro version of Takara’s Transformers Masterpiece MP-10 Optimus Prime.

This is the crown jewel in my Transformers collection for a lot of reasons. One of those being is that I always liked Optimus Prime ever since the original G1 cartoon was airing way back in the 80’s. But I would say the biggest reason why I always wanted the MP-10 Masterpiece version of the Leader of the Heroic Autobots because this isn’t just a toy to me; it a feat of masterful engineering. 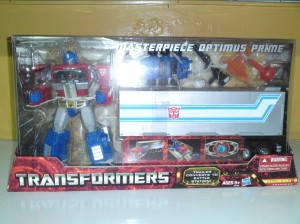 Look at it in all its glory!

First off, let’s go take a look at the man himself, Optimus Prime. He looks just like he did in the cartoon way back in the 80’s! I mean, the original G1 toy already did a great job capturing his look (or is it the other way around since they produced the cartoon to sell the toys) but the MP-10 Masterpiece version took things one step beyond. Takara did an amazing job making him look almost exactly like the cartoon.

What makes it even more amazing is all the points or articulation they gave Masterpiece Optimus Prime. Because of this, you can actually make him do a lot of really striking poses. And even with all of that, Takara went above and beyond and also managed to squeeze in the Autobot Matrix of Leadership in his chest cavity without sacrificing anything. By the way, the Matrix of Leadership doesn’t open or anything like that but it’s a sweet little die-cast object that feels really solid in your hand. 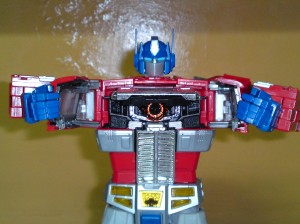 You can almost hear “The Touch” silently blaring in the background.

Optimus Prime in vehicle mode is also a thing of beauty as well as, once again, Takara managed to accomplish making also look like he did in the cartoon. He looks beautiful in his truck form and you can’t really see any robotic bits sticking out of him while in this form. I do kinda dislike they had to give him two “grills”; the one you see while he’s in robot mode actually tucks underneath when he’s in vehicle mode while the chamber that hold the Matrix of Leadership folds down and becomes the vehicle mode’s bumper and front grill when in truck mode. Not a big issue but is kind of disappointing that they couldn’t have found a way to use just one grill for both modes.

Of course, Optimus Prime’s truck mode wouldn’t be complete without his trailer as it completes the look. The trailer may look really simple as it is just a plastic box that you hook up to the vehicle but Takara did affix a lot of nice details on it, such as the raised Autobot logo and all of the panel lines. They even went to all of the trouble to pound in rivet marks on it. It really feels nice in hand as well as it feels like a solid piece of workmanship. 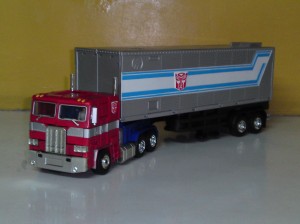 “Megatron must be stopped… no matter the cost.”

Maybe I’m overthinking things a bit but, in a way, it’s almost like Takara/Hasbro also used Masterpiece Optimus Prime to try to explain all of the unanswered questions us fans had when we were watching the G1 cartoon, like where does Prime store his gun? In the cartoon, he would reach behind his back to pull out his Ion Blaster. But you never really see it hanging from his back. Well, based on the MP-10 Masterpiece figure, the Ion Blaster can fold up into a neat little package and can be stored inside a cavity in Prime’s back!

Also, there’s always been a mystery as to where does Prime’s trailer go while he’s in robot mode? He always brings his trailer but it always just seems to vanish in the background when he transforms into a robot. Where does it go? Well, MP-10 to the rescue! Apparently, when Optimus Prime is in robot mode, Roller, the little drone that comes with the trailer comes out and fulfills the duties of dragging it around! 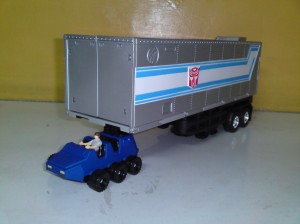 Roller makes for a good schlepper!

Unfortunately, the Roller figure isn’t all that impressive as it looks like the scrimped on his engineering. It’s nice that you can fold Roller’s rear end so that he can drag around the trailer around. But Roller is too light and the weight of the trailer will usually press down on him so that only his rear wheels are touching the ground! Maybe if they beefed Roller up but adding a die cast base it wouldn’t have been an issue. But right now, the little drone car feels like a chunk of cheap plastic as it is.

Thankfully, the trailer/combat deck more than makes up for Roller’s poor performance. Like in the original G1 toy, the trailer can be opened up to reveal Prime’s Combat Deck. Although they did get rid of a lot of the gimmicks from the original G1 toy, such as the ability to launch Roller as well as the Combat Deck’s drone’s missiles, Takara added a lot more detail to its interior. There’s a lot of fine molding and craftsmanship as well as a dedicated place to store Prime’s gun and Energy Axe. However, since they did remove the launcher gimmick, if you keep Roller inside while in trailer form, he will rattle around as there isn’t a way to lock him in place. It’s a definite misstep but probably the only one I’ve noticed. 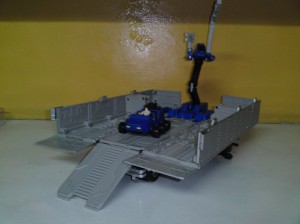 Wish I saw more of these guys in the cartoon though.

However, not all of the accessories of the Hasbro Masterpiece Optimus Prime figure are exceptional. There are two that are really lacking in execution. The first one would be the included Spike figure. It’s nice of Takara to include him but, honestly, I don’t like even bringing him out of the box! He’s just incredibly small and kind of fragile. Simply bending him at the knees would make him lose a leg! Sure he’s not an integral part of the figure but the Spike figure is just as useless as he was in the cartoon.

The second accessory I don’t really care that much is the Energy Axe attachment. Although it actually only made one appearance in the cartoon, it was in an iconic scene where Prime unleashed it to battle Megatron, who was brandishing an Energy Flail, atop Hoover Dam. That scene pretty much cemented the Energy Axe into posterity. Too bad it’s a piece of crap! You can’t really fit it into Prime’s hand all that well as it’s too snug a fit! 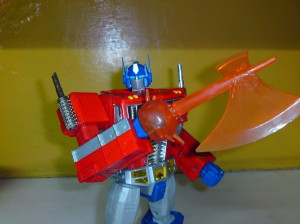 You can even see the hand at the base of the Energy Axe!

However, these are very minor gripes compared to how well Takara executed the engineering of Masterpiece Optimus Prime. The MP-10 was kind of a “reboot” to the entire Transformers Masterpiece line as this was the standard scale Takara would be following since then. I’m glad they did as it’s safe to say this is the definitive Optimus Prime. If you’re a Transformers fan and you can get your hands on one, do it. You won’t be disappointed.

What do you think of MP-10 Masterpiece Optimus Prime? Let me know in the comments section below!