So everyone has already heaved heaps of positive comments about Marvel’s latest movie, Captain America: Civil War. It is hard to deny that it is probably one of the best superhero movies to date and continues Marvel’s hot streak of giving fans excellent movie versions of their comic book characters. On the other hand, a lot of people were upset with DC’s latest superhero movie, Batman v. Superman: Dawn of Justice as, well, it just wasn’t that great of a film. That’s extremely bad especially if you consider it’s been a dream to see Superman and Batman brawl on the big screen in, like, forever!

Essentially, people just love the Marvel movies but are pretty apathetic towards the DC flicks. But if you travel back to the late 80’s and early 90’s, things were pretty much the opposite. DC was riding high with the success of the Tim Burton Batman movie while Marvel…

Oh, where do I begin with what’s wrong with Captain America? Well, actually, before I do, I guess I have to throw up the obligatory SPOILER WARNING because I’ll be discussing a good chunk of the plot. Yeah, it’s a 25 year old film (it was released on December 14, 1990 in the UK) but I highly doubt many people actually went to the cinemas to watch this film as, according to IMDB, it only raked in $10,173 during its time.

I guess I can start with the good points of the film since they’re so few of them to begin with. Well, Captain America’s origin story in the film is somewhat faithful to his comic book origins. It’s still about a guy named Steve Rogers to submits to an experiment that turns the lame wannabe soldier into a rather lame superhero named Captain America. Also, besides the rather light shade of blue they chose, the costume is pretty faithful to the comic as well. That doesn’t mean it looks fantastic. Rather, it looks like a guy who managed to pull off a rather impressive cosplay costume with meager finances. Or it looks like the current Captain America’s USO outfit found a time machine and went to the 90’s only to be word in this movie.

Not really that far off.

And that’s pretty much all the positives I can think of about the 1990 Captain America film. Everything is all downhill from there. The plot is a weird meandering mess. Essentially, the Red Skull plots to kidnap the President of the United States and brainwash him to reverse his global environmental stance. There were times when the story would just not go anywhere or just veers into stupid territory.

There’s a segment where the President’s reporter friend stumbles upon the newly unfrozen Captain America who just so happens to be fleeing from Red Skull’s female henchmen. What does the “fearless” Captain America do after the reporter reveals that the Red Skull is still alive and has been killing historical icons like JFK and Martin Luther King, Jr.? The “heroic” Captain America feigns getting carsick and steals the reporter’s vehicle! Oh, and that’s not the only time he pulls the “I’m getting carsick” routine! He does it once again later in the movie with his female companion! What a hero!

The acting isn’t that good. Mark Sallinger plays Captain America and he pulls off the role perfectly… if he just wanted to portray the character as he was when he was frozen in the ice. He’s so totally devoid of emotion in his performance, it’s almost astonishing! He’s not the only one who pulls out an awful performance. The rest of the cast just ham it up the entire time, delivering really embarrassing performances. There are a couple of exceptions. Ronny Cox who plays the President and that’s because, well, Ronny Cox is awesome in everything he’s in. I mean, he was Dick Jones in Robocop! Of course Ronny Cox is awesome!

The second would be the guy who played Red Skull, Scott Paulin. It’s still a very ridiculous performance with the prerequisite thick accent that makes him sound more like Count Dracula than a German (actually Italian because he was kidnapped in Italy as a child… long story) fascist super-soldier and it’s over-the-top and cartoony as heck. But I guess it suits the mood of the entire film so I gave him a pass. But, man, he looked awful! 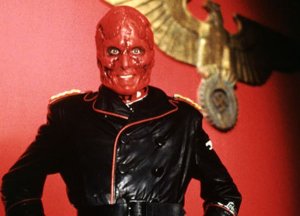 Makeup effects of the early 90’s, ladies and gentlemen!

And I think that’s the problem with the entire film. I would say this Captain America movie was okay if it was made just a few years after the live-action Batman television series with Adam West and Burt Ward. If this was produced in the 70’s or maybe the early 80’s, it would have still been a decent film. But, no! This was made and released in 1990, a full year after the Tim Burton helmed Batman movie starring Jack Nicholson and Michael Keaton! This looks way terrible by comparison! And to think the overall budget for this Captain America was $10 million! It certainly didn’t look like it!

However, even if the film is garbage, I would still sort of recommend the 1990 Captain America film for a couple of reasons. One, it’s kind of fun to see how far superhero movies, more specifically Marvel superhero movies, have come along since this was released. We now have a great trilogy of movies based on the character. Second, I would have to say this movie is one of those “so bad, it’s good” kinds of experiences. It’s terrible for sure, but there is a lot of laughs to be found! So, yes. I’m still giving this movie a thumbs up but for all the wrong reasons.

See? A thumbs up!

f you really want to see it now, you can go to the very place I went to watch the movie: YouTube! It’s actually really easy to find since I guess the producers of the film don’t really care if people watch it for free anymore? Whatever the reason, it’s there. In fact, let me embed the very video I watched so you can see how spectacularly bad this version of Captain America was!

What do you think of the 1990 version of Captain America? Let me know in the comments section below!