After waiting for ages, the WWE Network is finally available in the Philippines! Since they were offering a free trial, my brother and I decided to try it out. We initially wanted to wait until Wrestlemania before trying the WWE Network but, considering that a lot of other wrestling fans in the Philippines may decide to get their trial during that same period, we decided to put it to the test by getting it a month early. And it just so happens that the WWE has a new show called Roadblock, a Network exclusive show just before Wrestlemania!

We managed to catch it live but out Internet was acting up. Good thing they do have Roadblock on demand so we did get to watch it in the middle of the night where no one uses their Internet connection and we could actually stream it smoothly! But was it worth the wait?

What’s the best way to start a new pay-per-view like event? Why, with a heaping bowl of Booty-Os of course! Oh, and I bet Booty-Os are going to be super sweet. You know why? Because I bet they don’t dare be sour! Haha! I crack myself up sometimes! Almost as much as The New Day! I really wish the New Day’s merchandise was readily available in my local mall. I would buy Booty-Os as well as that lovely unicorn headband so hard…

While I was so totally hyped for Booty-Os and the comedy stylings of Xavier Woods, Kofi Kingston and Big E, their match with League of Nation members Alberto Del Rio and Rusev… not so much. The match itself was a pretty standard match for the most part, with both teams getting the upper hand at one point or another. However, besides the antics of the New Day, this was a fairly standard match.

Things did pick up a bit during the closing moments. After Sheamus took out Kofi, the League of Nations took advantage as Barrett did a vicious kick to Big E. However, Woods climbed the ring apron to distract the referee from counting the pinfall. As Sheamus chased Woods around the ring, Kofi pounced on the Celtic Warrior with a modified face plant on the outside. Big E managed to recover enough to nail Barrett with the Big Ending to get the three-count.

This was an average match that only really got good during the latter part of the match. Still I have to give props to The New Day and their opponents as it was generally entertaining… and really made me want to get me some of those Booty-Os! 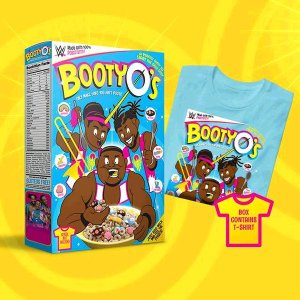 They make sure you ain’t booty!

Rating: 6 of 10 Booty-Os cereal (part of a complete breakfast)

You know what, I totally forgot that it was Jack Swagger who beat Chris Jericho for the WWE Heavyweight Title way back in 2010. I would’ve forgotten all about it if Jericho didn’t mention it in Roadblock! Thanks, Chris Jericho!

In all honesty, I wasn’t feeling the match at all. I guess that’s why Jericho had to mention his history with Swagger or else this entire fight would look pretty inconsequential… which it is. It’s still incredible that Jericho can still make a match interesting even when paired with someone as uncharismatic as Swagger but God knows the only member of We The People is trying.

Still, the entire affair was a vehicle to show what a bad Jericho can do, such as use the referee for leverage to escape from the Patriot Lock, which was the beginning of the end. Jericho then slammed Swagger into the turnbuckles and then locked in his patented Walls of Jericho. Swagger didn’t even struggle and eventually tapped out.

A pretty “meh” match throughout. I actually have to say the opening promo was more entertaining than the most of the match!

I was pleasantly surprised to see this match in a “mainstream” event. I love me some NXT and I definitely love me some Enzo Amore and Big Cass. Carmella… not so much. But still, seeing them go after the NXT Tag Team Titles on a non-NXT program is impressive. What’s more impressive is how over the two are as the crowd new the entire Enzo Amore entrance speech!

The match itself was very exciting and I love the contrast of styles. While Enzo and Cass were more stylish with their offense, The Revival, Scott Dawson and Dash Wilder, were not slouches as they were more concerned with just beating people into submission. These opposing styles of wrestling made for an incredible match… but of course it was the more flash moves of the Enzo and Cass duo that really wowed me.

Unfortunately, Enzo and Cass were unable to defeat their opponents to become the new NXT Tag Champs because of Carmella. Dawson drew Big Cass to the outside by running into Carmella. Carmella did get to slap the taste out of Dawson’s mouth but The Revival managed to get the better of Big Cass by double teaming him and taking him out of the equation. Enzo got a quick run before succumbing to the two-on-one situation.

Really awesome match. If this match doesn’t draw in wrestling fans to watch NXT, I don’t know what will!

Match #4: Charlotte (with Ric Flair) vs Natalya for the WWE Divas Championship

I guess it makes sense to see Canadian native Natalya get a shot at Charlotte’s Divas title since they are holding Roadblock is Canada. However, does anyone really think that Nattie could beat Charlotte with Wrestlemania just around the corner? I mean, it’s slated to be a Triple Threat between Charlotte, Becky Lynch and The Boss Sasha Banks! Replacing Charlotte with Natalya would be bad for business!

Even though we all new Natalya wasn’t going to walk away with the title, that doesn’t mean we can’t have an exciting match. And this match was filled with some great action. Both Divas got to do their signature moves. There were some telegraphed moves, such as a rather slow chop from The Dirtiest Diva in the Game which Nattie easily ducked and countered. There were also a lot of reversals which looked pretty awkward.

The finish was kind of odd, in my opinion. Nattie locked the Sharpshooter on Charlotte. Ric Flair reached for his daughter’s hands in clear view of the referee. Nattie somehow knew what was going on even when she had her back to Ric Flair the entire time and confronted the two time WWE Hall of Fame inductee. Charlotte took advantage of the distraction

If it looks like I’m ragging on the match, it’s because I kind of expected more. Both Divas worked together way back in NXT and it was a really fantastic match. This one just pales in comparison. Good match overall but not great. Maybe Charlotte’s saving her best stuff for Wrestlemania?

I’m really confused with what the WWE is doing with Bray Wyatt. It’s like they have no idea what to do with the man and the entire Wyatt Family. So I guess booking Luke Harper and Bray Wyatt against Brock Lesnar was the only thing they could think of?

Anyway, since this was billed as a two-on-one handicap match, I actually thought The Beast would be in big trouble, especially if you have Wyatt and Harper in the same ring. Yet, Wyatt didn’t even enter the match! What the hell? Harper did get some offense in but it was mostly the Wyatt Family member taking a trip to Suplex City over and over again.

The finish came when Brock delivered a few more german suplexes before finishing off Harper with an F5. That’s it. Honestly, pretty lame considering the Patriarch of the Wyatt Family didn’t really do anything in this alleged two-vs-one match.

I’m a huge fan of Sami Zayn when he was in NXT and I think it was a bad omen when he got injured during his first match in the main roster against the man that never injures anyone, John Cena. So it’s really good to see him back in the WWE! I did question the decision to pit him against Stardust in his first pay-per-view like event though.

Thankfully, my concerns were quickly addressed since the match was pretty good. It started out slow but slowly built up with some great and fast paced action. Stardust did get a lot of offense in but this was pretty much Sami Zayn’s time to shine! Even if he was out of action for around a year, it didn’t look like Zayn lost a step when it comes to wrestling ability. He took the hits and gave the hits! 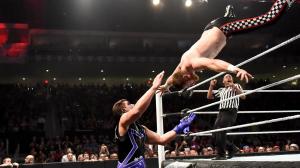 The finish came after Zayn kicked out of Stardust’s Disaster Kick. Stardust attempted to continue the offense but Zayn grabbed his opponent and threw him into the corner. Zayn took the advantage and nailed Stardust with his Helluva Kick finisher, netting him the pinfall victory.

A pretty solid match however it did feel a tad too long. There were a lot of submission holds by Stardust which did slow the pace down. If they limited the number of rest holds, this would’ve been a better paced match.

Who doesn’t like the antics of Dean Ambrose? I mean, the way he wormed his way into getting a title shot against Triple H just weeks before Wrestlemania was entertaining to watch! And I could actually see him main event Wrestlemania. I mean, he’d be much better than that wet blanket Roman Reigns the WWE is trying to shove down our throats!

Anyway, the match was very good, with hard hitting action from the get go. It was actually surprising to see Ambrose not just going ham with strikes as he actually targeted the legs of Triple H! Apparently, The Lunatic Fringe can be very strategic when it comes to offense! But Triple H was definitely no slouch and did give a beatdown like only The Cerebral Assassin could give! Still, watching Ambrose running around the ring is just plain entertaining! Why isn’t he main eventing Wrestlemania again?

The finishing sequence was as good as it was controversial. Ambrose nailed Dirty Deeds and seemingly got the three count against Triple H. However, the referee saw Ambrose’s legs under the ropes, invalidating the pinfall. Triple H got desperate and tried to get a pinfall by using the ropes for leverage but Ambrose kicked out. The Lunatic Fringe tossed The Cerebral Assassin to the outside and wailed on him with blow after blow.

However, Ambrose had to rush into the ring to break the count and, as he return to assault his opponent, The Game avoided an elbow, which led to Ambrose smashing himself through the announce table! Triple H laid in wait in the ring as Ambrose rushed in to beat the count. But Triple H pounced on him with a Pedigree enabling him to retain the WWE Heavyweight title.

Really excellent match! Both men pulled out all the stops to give us a phenomenal match! This was exciting all throughout and simply a treat to watch. But really, why isn’t Dean Ambrose main eventing Wrestlemania again?

Rating: 9 of 10 feet under the bottom ropes

There were two standout matches in WWE Roadblock, namely the one for the NXT Tag Titles and the WWE Heavyweight Title. The rest of the matches were good but nothing really great. It’s also glaring that some of the main draws, such as Kevin Owens and AJ Styles didn’t have matches during Roadblock which did hurt how good it could’ve been. Still, considering this was my first WWE pay-per-view styled shows I watched on the WWE Network, I think it was a good time to get it.

Rating: 7 of 10 WWE Network is in the Philippines!

Have you seen WWE Roadblock? What did you think of the show? Let me know in the comments section below!