Last week, I wrote about the decision making process I went through to pick my main character in Capcom’s Street Fighter V. I used to main Vega/Claw all throughout the Street Fighter IV series of games. But, since he wasn’t a charge character anymore, I knew I had to drop him. After going through the roster of charge characters, I finally decided I would be using M. Bison. In retrospect, it’s kinda ironic since Dictator is Vega in Japan!

Anyway, now that I got my new main character, I had to try him out. After all, this is my first day with the game. I got this on the same day as the rest of the world: February 16. I went a few rounds against a standing dummy in Training mode just to get a feel for him before I go enter the world of online battle. Oh, I did also try him out through Survival… on Easy mode and I went through his ridiculously short and nonsensical Story mode! Yeesh! At least I leveled him up to Level 8 and got a whole bunch of Fight Money.

But those were just a preview to the main event: entering the crazy no-holds barred arena that is online! I had mixed feelings about going online this early. When I first started playing Street Fighter IV, I had the luxury of practicing the game from the safety of my own home against the computer through Arcade mode.

I would just pick Vega/Claw and try to fight my way through Arcade mode until I would finally make it to Seth, the final boss of the game. I know I wasn’t good when I first started because I used to get creamed by Seth quickly even when set to Medium difficulty. But, as I got more time in and actually learned some tricks and moves, I did eventually get enough skill to beat Seth on Medium. Then on Hard. Then Hardest. Then Hardest without losing a single round… then losing to Evil Ryu afterwards.

But I can’t do that in Street Fighter V because Capcom had the “bright idea” to leave out Arcade mode from the initial launch of the game! What a stupid move! So I went through the Medium setting of Survival mode because, well, the Story mode’s AI was just retarded and no challenge! After I beat that, well, I decided to try going online. I went to the main menu, selected Ranked matched and waited…

I think I waited for something like 20 minutes sitting on that screen without getting a match! I actually had to check if my modem and router were turned on! I know it’s ridiculous since it would’ve given me a message saying I got disconnected from the network or something like that! But, really, 20 minutes! That’s a long time to be staring at a really lame screen that doesn’t have anything on it!

At the 21 minute mark, I did finally get a match with someone! All of a sudden, I started to get nervous! I started to forget what was the M. Bison combo that I discovered! Heck, I actually forgot what his moves were! I guess it was all of the anticipation and frustration of not being able to play for a long time. 20 minutes is a long time to be not playing a game when you’re supposed to be playing it! But, after we got on the screen displaying my M. Bison and my opponent’s Ryu and the screen got all white, I got a message saying I got disconnected! I was thinking then that the issue was with my Internet service, especially since we were having problems with it for the past few days that time. 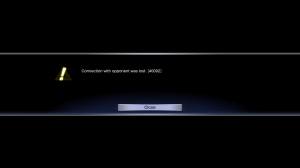 40002? What a very undramatic error message.

It turns out it wasn’t just me. It was the entire Street Fighter V world! Everyone was trying to connect with other players to get matches in but Capcom messed it up again! They did away with with Arcade mode to try to encourage players to go online and yet, you can’t go online either to do what Capcom wants! What a ripoff!

This was around the time I decided to quit for the day. I wanted to play some more but… like I said, there’s no Arcade mode so I could try to, at least, practice against the computer! But without Arcade mode and with me unable to connect with anyone online, maybe it was a good idea to just quit for now and try a different day. I’ll go try again tomorrow. And it did take a day for Capcom to finally fix the server issues! So I was actually able to go online then! I’ll go talk more about my first real online matches on Street Fighter V next time!

What was your first online experience with Street Fighter V like? Let me know in the comments section below!