It’s hard to believe but, when it was announced a Deadpool movie was being produced, there was a deep uncertainty that Fox would buckle down and ensure the film gets a PG-13 rating. Fans of the character were clamoring for a Deadpool film that would wash away the taste of awful version we got in X-Men Origins: Wolverine. But, more importantly, they would want to see him be the sophomoric, juvenile, wisecracking and racy and ultra-violent Merc With A Mouth we all knew he would be. In other words, they wanted the film to get an R-rating.

So, when it was announced that the film would indeed forego the “need” for it to be a “family friendly” film and keep all of the violence and sexy innuendo intact, fans rejoiced!

However, while we were overjoyed to learn Deadpool would have a hard R-rating, we were also concerned if the film would become a financial success. R-rated films have received a kind of stigma of being a risk for Hollywood. Movie studios are not only looking to cash in on local box-office returns but they’re aiming for financial success around the world; this is a global market, after all. They do take this into account and this may be one of the bigger reasons why a lot of movie studios try to make PG-13 edits of movies that would otherwise get an R-rating. In fact, Deadpool, despite it being a huge box-office draw in a lot of countries, will never be shown in China because the country has banned it due to excessive violence.

Hollywood also want to make sure they appeal to a much wider audience. They want to make sure their film can be watched by the most number of people and just by developing a R-rated movie would undercut profits since a certain age group wouldn’t be able to to watch it. Now, there is a certain logic to this since most of the highest grossing movies of all time have been either PG or PG-13. Obviously, Hollywood knows these numbers and are trying to duplicate those successes. However, taking all of that into consideration, I think it’s a dumb idea for Hollywood or any movie studio for that matter to just focus on trying to make family friendly films all the time to ensure they make money. It’s like nowadays, if you release a rated-R movie, there’s a good chance your film is going to be a failure.

No more Rated X I take it?

I actually grew up watching a lot of R-rated films. I can still remember watching Robocop, a movie where ordinary beat cop Alex Murphy is shot up into hamburger meat, turned into the titular pinnacle of justice, hunts down one of the insane criminals who murdered him and tricking him into running his car into a toxic soup which turns him into a disgusting mutant… among other things. I also remember watching The Exorcist on Betamax, which probably wasn’t the best idea to see when I was 3 years old! But I understand why it was proclaimed to be the scariest movie of its time at that very young age!

I was also able to watch a lot of old Hollywood action movies from action greats like Sylvester Stallone, Mel Gibson, Bruce Willis, Jean Claude Van Damne, Arnold Schwarzenegger and many more. I grew up watching the rather tame by today’s standards violence in Rambo: First Blood: Part II. I listened to profanity laced dialog in movies like Die Hard and Lethal Weapon. I’ve witnessed bloody acts like a man being turned into mulch (literally) in Universal Soldier. And, of course, I’ve seen the naked bosom of a three breasted woman in the original Total Recall. 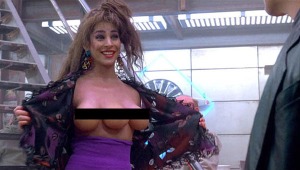 It was important to the story!

Now, what do movies like the aforementioned films like Robocop and Total Recall have in common? Well, they were all box office hits and they definitely left an impression on the general public. Okay, they may not ever be considered as important as films like Gone with the Wind or Star Wars. But they were still incredibly fun films, even for someone who watched them when they were under 18 years old, the age when you’re not supposed to be watching them!

I think there’s the idea that, if a movie is not a global phenomenon or it just makes a profit but not a huge mountain of money, the film would be a failure. The global market has skewed perceptions in such a way that Hollywood even though a movie makes money, it can still be deemed a flop if it doesn’t make millions. They keep on trying to make huge blockbusters that’ll get, not just some of the money, but all of the money. If they don’t make it PG-13 so that the kiddies can go watch it, they’re leaving money on the table. Money that should be lining their pockets!

They want it all!

I think it’s dumb for them to think a Rated-R movie can never be a huge enough blockbuster to make a profit. They already tried dumbing down movies like Robocop and Total Recall by making big budget remakes and reboots of those films… both of those remakes sucked, by they way. And why did they suck? It’s because Hollywood tried to suck out one of the things that made them popular (the adult violence and sexuality) and water it down. Sure, the Total Recall remake did have a three breasted woman but did the film have the attitude that made the film so memorable? No. It didn’t even make as much money as the original film! The PG-13 remake made $200 million on a $125 million budget while the original R-rated film made over $300 million worldwide on, get this, a budget of $60 million!

I do think Hollywood is coming to the realization that it’s not the film’s rating that will make it a box office success or flip. Rather, it’s if the film is any good! Deadpool’s success is starting to change a lot of movie studio head’s minds as it did prove a superhero film that has nudity, sex scenes and gory action scenes can become box office gold. Maybe Deadpool was the wake up call they needed. I sure hope so.

Do you think it’s a good idea for Hollywood to focus on PG-13 films? Let me know in the comments section below!

One thought on “When Did Getting An R-Rating Become Box Office Poison?”