It’s not often to see ESPN get mentioned in video game news, especially those related to Nintendo, but it happened – they announced that they’re adding Super Smash Bros. events in their eSports coverage. Currently, ESPN is already covering events for League of Legends, Dota2, and Hearthstone and is looking to add more.

Adding a fighting game to eSports coverage is a no-brainer, especially given how many people enjoy sports that involve actual fighting like boxing and MMA, but I’m quite surprised that ESPN chose to name Super Smash Bros. first. Super Smash Bros. isn’t even a regular title being played at the Evolution Championship Series (EVO), with Smash Bros. games appearing only five times in the renowned fighting game tournament since 2002.

But hey, I’m all for this! I’ve been a fan of the series for quite a few years now and I’m glad that the franchise is getting a little more mainstream attention. I know that Smash Bros. isn’t as popular as Street Fighter and Tekken, which is why I’d like to talk about why Super Smash Bros. would make for a good “spectator eSport”.

The first is really superficial and involves the game’s roster. Simply put, the fighters in Super Smash Bros. are characters that are known from other video game titles and franchises, so they’re more recognizable than most characters you’d see in other fighting game franchises. Sure, not all Super Smash Bros. are popular enough and other fighting games have their own share of really popular characters but my opinion is that people who aren’t familiar with fighting games would be more likely to recognize who Mario and Pikachu are compared to Tekken’s Heihachi and Armor King or Mortal Kombat’s Sub-Zero and Raiden – characters that I’m sure are quite popular but not at the level of Mario or Pikachu. 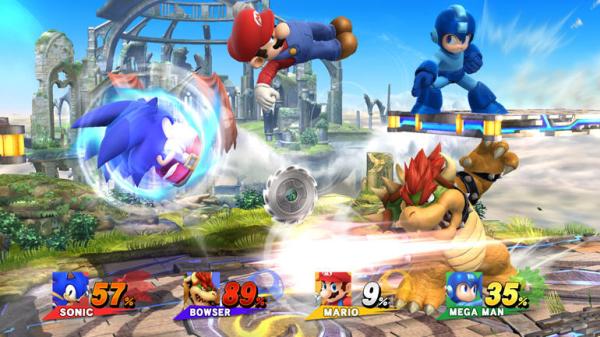 Having characters from different video games has always been one of Super Smash Bros. selling points.

But like I said, this reason is superficial – regardless of recognizability, it wouldn’t be very entertaining to show Mario watching paint dry. The mechanics of the Super Smash Bros. fighting system is what really makes Smash matches a joy to watch. Super Smash Bros. was designed to mirror the platforming mechanics of classic Super Mario Bros. games and thus involves a lot of jumping around, resulting in fast paced matches that involve a lot of aerial battles and flashy moves. This is one trait that makes Street Fighter and Marvel VS Capcom games more entertaining for me to watch than Tekken matches which involve ground-based fighting styles.

And as far as the platforming aspect is concerned, stages are a big part of classic/casual Super Smash Bros. fights. Not only does each stage feature different platforming layouts, but they may have certain elements that can result in chaotic game experiences; examples of which are the Summons in the new Midgard stage from Final Fantasy VII and the karts and constantly moving platforms of the Rainbow Road stage from Mario Kart 7.

One of the largest stages in Super Smash Bros. is the Hyrule Temple stage. Can you spot the four fighters in the image?

What really sets Super Smash Bros. apart from other fighting games is its core mechanic of how KOs are achieved. Rather than depleting a health bar completely as in traditional fighting games, players earn a KO by actually knocking opponents OUT of the stage – either by sending them flying past the “borders” of the stage, or by getting them to fall off the platforms. This system almost guarantees KOs that are visually more pleasing than what I see as cheap victories in traditional fighting games – victories won due to chip damage (damage from attacks that are blocked) or to weak attacks that manage to penetrate opposing defenses.

Edge guarding: a high risk, high reward strategy in Smash Bros. that is always a treat for my eyes, even if I’m on the receiving end.

I mean, how DO you knock someone out of the stage in Smash Bros.? By doing sufficient damage to them (shown in a damage meter) and hitting them with a strong enough attack that can launch them (usually accompanied by a lighting-style visual cue for emphasis), or by following a tactic known to Smash Bros. players as edge-guarding – attacking an opponent off a platform in order to prevent them from recovering.

The closest equivalent I can think of to losing via a weak crouching kick or to chip damage is accidentally falling off a platform, or not recovering fast enough to make it back to a platform. And even these are, in my opinion, miles better than an anti-climatic weak crouching kick (not even a sweeping one) to the ankle that sends your opponent’s head back to show the knock out.

With all that said, I’m excited that ESPN chose to feature Super Smash Bros. events. I hope this is a success for them, because I also want to see ESPN feature other fighting game competitions too.

What do you think about the idea of watching Super Smash Bros. events over at ESPN? Are there any other fighting games that you’d like them to feature as well? Share your thoughts with us by leaving a comment or two below!

2 thoughts on “Why Super Smash Bros. is a Good “Spectator eSport””