If you ask me to come up with a Top Ten list of horror games on the 3DS, I wouldn’t be able to do it simply because there are too few of these in the 3DS catalogue. Which is why I’ve been looking forward to the release of Dementium Remastered, an updated version of the Nintendo DS game Dementium: The Ward from Renegade Kid. It’s been out for quite some time now and I’ve already played through it at least once, so here’s what I can say about it.

Dementium Remastered is a first person survival horror game set entirely in a psychiatric hospital. The game’s trademark mechanic is that the hospital is almost entirely in the dark so you can only see what’s in your immediate vicinity. You’ll find a flashlight later on as well as an array of weapons, but you can only have one out at any given time so you have to choose between having a weapon at the ready but with almost zero visibility or having the flashlight on hand but being almost complete defenseless. Switching between the flashlight and the weapon that you used last is easy enough; all you have to do is tap up/down on the D-Pad. Meanwhile, cycling through your inventory requires pressing left/right on the D-Pad.

It’s not that hard but its not very comfortable given that the D-Pad is located below the Circle Pad which is used for movement, meaning you will need to stop moving if you want to switch weapons. Thankfully you can also use the Weapon icon on the touchscreen, which pauses the game and shows you all of the weapons on hand. It’s also a little clunky since you’ll really have to reach out with your thumb all the way to the middle of the touchscreen to do this.

Dementium Remastered offers three different options for aiming, the first is via the touchscreen which is the most accurate but also means you will have only one hand to hold your 3DS with – quite painful for your wrists especially if you’re playing on one of the bigger XL models. The second option is using the face buttons, and the last option is using the Circle Pad Pro accessory or the C-Stick of the New Nintendo 3DS.

In terms of visuals, Dementium Remastered is decent enough. The layout of the stages really look like these are parts of a psychiatric hospital, but I wish more detail was put in some of the environment models like bookcases and clocks. The environments can seem to be a little repetitive but it does make sense – hospital floors do look the same in real life. The game has enough variety in terms of monsters and they all look disgusting and menacing, especially the bosses. Humans could also use more work – they lack some details that would make them a little more realistic.

Dementium Remastered offers visuals that were updated for the Nintendo 3DS. Decent, but could have been better.

I do have to mention the game’s stereoscopic 3D effects. It’s there, and it’s a pleasant surprise – the last press release that I read prior to this game’s release is that there wouldn’t be any stereoscopic 3D features to minimize the filesize so I wasn’t expecting there to be any. The 3D in Dementium Remastered does look good but it’s a little too “deep” and results in blurring if I hold my 3DS too closely, even at the lowest setting. I have a New Nintendo 3DS XL so this doesn’t happen often in my experience. I think this game’s “sweet spot” is a little farther than what I’m used to.

Where Dementium Remastered really shines is through it’s sound effects. Sound really helps create a frightening experience, and this game has a lot of scary sound effects. I’ve played a lot of survival games already and yet this game still manages to creep me out with all its blood curdling screams and cries.

I haven’t mentioned the game’s plot because there’s barely any, which is another area of improvement. Why are you in this weird, creepy hospital? Why are there monsters killing everything alive? Sure, there are clues to what’s really happening all throughout, but nothing really drew a clear picture for me, even at the end of the game. I learned more about the game’s plot by reading its Wikipedia entry than by playing the game. The lack of story elements don’t break the game though – not knowing much about what’s going on didn’t have much impact on the fear factor that this game had for me.

I also mentioned the stages to be visually realistic, but in terms of level design, the majority of Dementium Remastered is a little too linear for my taste. By having too many locked doors and blocked paths, the game essentially forces you to follow one single path, which is a shame since these could be better designed. This linear level design does make the game play out like a standard first person shooter game and kind of lessens the “horror” in the survival horror experience.

There are a few simple “puzzles” every now and then, but for the most part you’re just following one path and killing/avoiding whatever monsters you come across. I guess the developers were restricted because this is just a remastered version of a game that’s already existing and not much can be done in terms of the game design. 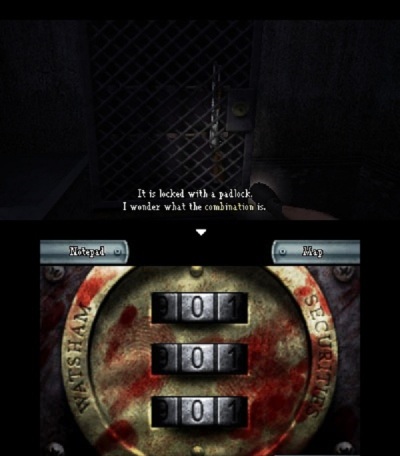 Dementium Remastered does have some basic puzzle solving, but it’s mostly an action-oriented FPS.

I didn’t mention any of the noted flaws of the original, Dementium: The Ward, that this version was supposed to have fixed because I didn’t play the original, but I’d like to address it anyway. Dementium Remastered is very accessible; there are enough save points to keep this game fair but not too much that it becomes too easy. Taking away enemy respawns also didn’t make the game too easy; while I didn’t really experience any ammo shortages I also did not feel like I was an indestructible force because of having adequate ammunition.

One more gripe: Dementium Remastered is a really short game – I beat it on Normal Difficulty in under 10 hours. I know this is just a  remastered version but I could see how unblocking some paths, adding a few mission objectives, and maybe even requiring a little backtracking could result in extending this game’s duration and maybe even add to its replay value. There are two more difficulty levels available and the game keeps track of your fastest completion time per difficulty so you can work on speed runs. But at this point, I think I’ve seen enough of what Dementium Remastered has to offer.

And what does Dementium Remastered have to offer? A short and flawed but solid and scary enough survival horror experience on the Nintendo 3DS, which is something that the system doesn’t have enough of in its library. It’s a little pricey at $14.99 considering that you can beat the game under Normal difficulty in under 10 hours, so I can’t really recommend this to everyone. In my eyes, the price of admission is a little justified by the rarity of similar horror games on the 3DS so I did not regret my purchase, but not everyone may feel the same way.

Those who enjoy the survival horror genre should at least consider getting this game though, especially if they’ve been aching for one on their 3DS. Personally, I enjoyed Dementium Remastered despite its short length – I’m considering playing through it again at a harder difficulty setting, just so I’d get more bang out of the money that I spent on it.

Have you played Dementium Remastered? What did you think about it? Share your thoughts with us by leaving a comment or two below!