Those are usually the words I hear after I mention that I actually like watching wrestling. Why yes, good sir/madam. Of course I know wrestling is fake! Maybe I believed it was real when I was like, oh, I don’t know, five years old! But they always have to ask me this question in a smug manner as if I believed the insane storylines and the unrealistic comebacks are real! I watch wrestling not because I think it’s real. I watch it because it’s fun!

Coincidentally, Max Landis, the same guy that wrote the found footage superhero film Chronicle, made a video which starts out with the same six words I mentioned earlier. It’s called Wrestling Isn’t Wrestling. And it’s brilliant look at why wrestling has garnered so many fans.

Wrestling Isn’t Wrestling actually doesn’t try to convince people that “sports entertainment” is a purely athletic event. Nor does it try to point out the ridiculousness of wrestling… okay, well, not all the time. The film instead tries to do something different that I never really thought of: the evolution of a character. Specifically, Max Landis focuses on his “favorite” wrestler: Triple H.

Now, I’m not a huge Triple H fan. But I did grow up watching him in the ring… as a member of D-Generation X. That was my first introduction to the soon-to-be head of the WWE and then-future husband of Stephanie McMahon. So, I actually didn’t know nor question why he was called Triple H in the first place! I didn’t even bother to look it up for some strange reason! But, after watching Wrestling Isn’t Wrestling, I now know that Triple H, or HHH, stands for his first in-ring name, Hunter Hearst Helmsley!

The presentation of Triple H’s career is unique. Rather than show clips of old matches, his story is narrated by a possibly inebriated Max Landis. It’s a fun story as Max goes through the major stages of Triple H’s “life” in the WWE. From his start as a pompous aristocrat, the founding of D-Generation X with Shawn Michaels, him forcefully marrying Stephanie McMahon and founding the D-X Army, the formation and eventual dissolution of Evolution, his loss to John Cena as well as the reformation of D-X, up until him becoming the head of The Authority. There are some missing pieces here and there but the basic and essential story is all there. It’s comprehensive to say the least.

Like I said, they didn’t use any archived footage from the WWE. So they had to tell the story using actors. Well, not actors actually. They got female models to portray the male wrestlers! It’s a rather unique take as we’re all used to watching big, muscular guys play wrestlers on the screen! And these ladies did a great job! Most of the time, they have to lip sync whatever Max Landis is saying and they nail it pretty much every time! I’m also very secure in myself to say that a lot of models are extremely attractive, especially the ones that portrayed Shawn Michaels, Batista and John Cena.

Wrestling fans will also get a kick of seeing some cameos as well from some in-ring performers. I managed to notice former WWE Superstars such as John Morrison, Shad Gaspar, JTG, Katie Lea and Justin Roberts. I was also amazed how they managed to snag some Hollywood and TV personalities, such as David Arquette, Seth Green, Macauley Culkin and Mythbusters Adam Savage and Jamie Hyneman. Okay, they aren’t A-list celebs. But the mere fact they’re here is astonishing to me!

But the biggest surprise for me was the person that played Triple H, Chloe Dykstra. Since she’s playing the the main focus of the film, she’s in pretty much every shot. And she does more than a decent performance. There are some times when it comes off like overacting but, overall, Chloe Dykstra pulls of a really great acting job. 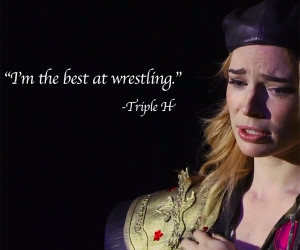 My biggest complaint about the film is that it’s only for wrestling fans. Non-wrestling fans will probably not find why Triple H’s story is engaging since they won’t be invested in the character. With all of the story’s twists and turns, it actually may be confusing for people who aren’t accustomed to how story arcs in wrestling makes sense in their own universe. But that’s a very minor hit on it. It’s very entertaining and Max Landis is a pretty good storyteller!

Yes, “sports entertaining” or wrestling or whatever you wanna call it isn’t real. But that’s not the point as to why millions of people enjoy this “fake” sport. Wrestling Isn’t Wrestling enforces that wrestling is fun because we know it’s entertainment and we want to watch what the characters will do next. If you’re a wrestling fan, give this a watch! Non-wrestling fans can safely skip it, though.

Have you seen Wrestling Isn’t Wrestling? What did you think of it? Let me know in the comments section below!