There’s certainly a lot of hype surrounding Yo-Kai Watch. As someone who isn’t really going out of his way to look for Yo-Kai Watch news, I’ve been seeing this title mentioned a lot in the past year. Forbes.com even has an article about this game. Yo-Kai Watch and it’s spin offs have been selling like hotcakes in Japan and for some time has been on top of Japan video games sales charts for months, even beating PlayStation 4 titles. Check out this table from VGChartz – Yo-Kai Watch (named Youkai Watch in the table) is ranked a meager 29th, but that only factors in Japan sales which is at 1.3 million units already.

Yo-Kai Watch has already sold more than one million copies in Japan.

Yo-Kai Watch is set to be released the day this article will be published (I’m writing this in advance) and as we get closer to its release date, I’ve been seeing more and more articles about this game. Let me go through what little I know of it.

Yo-Kai Watch is a video game developed by Level-5 for the 3DS, the same company behind the Professor Layton and the Inazuma Eleven games. Yo-Kai Watch is more than just a game, though – it looks like this property is being set up to be similar to Pokemon, a franchise that went beyond video games by tapping into anime, trading card games and other collectibles. The anime localized for North America is already airing on DisneyXD and several sources have stated that Hasbro has finalized deals regarding bringing Yo-Kai Watch toys into the United States.

As a fan of video games, of course my curiosity was piqued. What is it about this Yo-Kai Watch video game that has companies like Hasbro and Disney foaming at the mouth? I had the chance to experience the game myself thanks to a demo of the game that was released on the Nintendo eShop last October 22, and I’d like to share my thoughts as I was playing it.

Prior to playing the demo, I already had some preliminary information about Yo-Kai Watch. The franchise equivalent to Pokemon are called Yo-Kai – spirits based on Japanese folklore that are invisible to humans. A device known as a Yo-Kai Watch (worn on the wrist like a wrist watch) can allow wielders to not only see Yo-Kai, but interact with them in different ways. Right off the bat, I find the concept of Yo-Kai more interesting than the premise of Pokemon – I find the idea of invisible Yo-Kai much easier to swallow than a world filled with cutesy and not so cutesy monsters that you can catch using special balls.

Nate, the main protagonist, is able to see and interact with Yo-Kai thanks to a device known as a Yo-Kai Watch (shown prominently in this image).

The Yo-Kai Watch demo starts off with a short anime cutscene showing the game’s protagonist Nate encountering what looks like a stone gashapon, implying that he got his Yo-Kai Watch from this. There’s no further explanation beyond this – when you start the demo, Nate is in his room and already has his Yo-Kai Watch. A Yo-Kai named Whisper is already able to interact with him, and it tells Nate (you, as the one in control of Nate) to go out and catch Yo-Kai.

And here I find another thing that I like about Yo-Kai Watch – Nate’s house looks like a real house, albeit in more vibrant colors. But the detail is amazing – his room looks like a real room, complete with a bed, a rug, a study desk, a book shelf, a closet, and even an electric fan. The nearby bedroom is far less detailed, but the rest of Nate’s house retains the same level of detail – it has a bathroom, a separate toilet, a living area with a flatscreen TV, a dining area, a kitchen. It’s really impressive.

When you go outside, an unnamed woman calls out to you and asks for your help. She gives you your mission for the duration of the demo – to find and defeat three Yo-Kai which are causing mischief. I’ll skip directly to what exactly these mischievous Yo-Kai are doing because this is another thing that I like about Yo-Kai Watch. The first Yo-Kai that I encountered made people around it feel extremely lazy. The second one made people feel extremely negative. And the last one made people feel insatiably hungry. I don’t mean to rag on Pokemon but I can’t help but say that the premise of stopping Yo-Kai because they’re troublesome is more interesting and has more meaning to me than setting out to catch as many Pokemon as I can so that I can fill out my Pokedex.

The environments shown in the demo also have a realistic feel to them.

Similar to Nate’s house, the town really feels like a real town. Nate’s Yo-Kai Watch functions like a PKE meter in that it reacts based on how close you are to a Yo-Kai. To find the Yo-Kai, you’ll have to inspect the environment, and this is where I found out that you can interact with the environment a lot. You can peek underneath cars and vending machines. You can look up at different trees, or go through trash. When I was doing all this, it reminded me of the crazy things I used to do as a young boy playing outside, which is amazing. As I mentioned earlier, these Yo-Kai are invisible so you have to watch out for spirit trails and focus a target receptacle on it in order to make the Yo-Kai appear, upon which you will be able to do battle with it.

The last aspect of the Yo-Kai Watch demo that I want to touch on is the battle mechanics. In the demo Nate can’t fight himself but he’s already got a team of six Yo-Kai with him. They’re arranged in a circle formation around Nate so you can only have three Yo-Kai in front at any given time, but you can rotate the Yo-Kai in the middle of the battle by using the L and R buttons or the touchscreen. These Yo-Kai will do normal attacks automatically, but you have the option to make a Yo-Kai do a special attack (called a Soultimate) if its special meter is full. When a Yo-Kai doese a special attack, you’ll need to accomplish touchscreen based commands like tracing patterns, tapping fast moving circles, or spinning a disc. 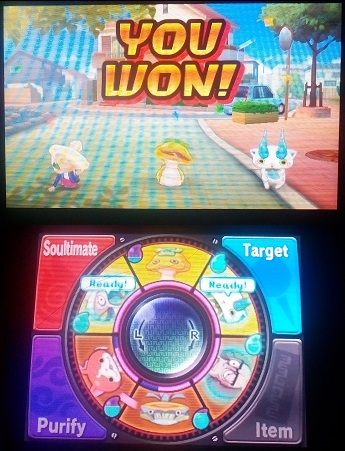 The battles in Yo-Kai Watch are in real time and rely heavily on touchscreen actions.

I’m not sure how I feel about this, to be honest. On one hand, the battle system of Yo-Kai Watch involves a lot of activity which makes it feel more intense than a menu-based system. Having the Yo-Kai attack automatically allowed me to focus on rotating the Yo-Kai as needed, as well as monitoring which ones are able to perform their Soultimates. On the other hand, the battle system is very touch heavy so you’ll end up holding your 3DS with one hand quite often (not very comfortable for owners of the heavier 3DS XL versions). I can definitely see how this approach would be more appealing to younger gamers compared to boring menu commands.

With all that said, I’m convinced that Yo-Kai Watch will be quite popular with young gamers. The mechanics are simple and easy to grasp, the subject matter has enough realism and gravity to it, and the presentation is top notch. My question now is, will the actual game have enough elements that will make Yo-Kai Watch appeal to older gamers like me?

I’m not sure if Yo-Kai Watch has aspects of it that didn’t make it to the demo version, like trading and competitive battles with other players. The trading, training, and competitive  aspects of Pokemon made that game franchise attractive to older players. If what I got from the Yo-Kai Watch demo is all that the actual game has to offer, then I don’t think it will be as appealing to gamers with more mature tastes.

But I’m convinced that Yo-Kai Watch will be successful enough, maybe even bring Level-5 to a whole other level (no pun intended). The holidays are coming, and with proper marketing I’m sure that a lot of young boys (and even girls) will be asking their parents for a 3DS and a copy of Yo-Kai Watch.

What do you think about Yo-Kai Watch? Have you had the chance to try the demo version? Share your thoughts with us by leaving a comment or two below!

2 thoughts on “Yo-Kai Watch – The Next Pokemon?”