In HuniePop, you control a hapless guy or gal (you get to choose your gender at the start) who’s been unlucky in love (or lust, depending on your point of view) as of late. The love fairy Kyu decides to take you on as her next project and teaches you the ropes on how to meet girls, woo them through dates and gifts as well as how to get them into bed. As you successfully make it with the girls of town, Kyu’s boss starts to take interest in you.

There are going to be some SPOILERS for this review… but, honestly, it’s such a barebones story, you can read this review and it won’t dilute the experience.

Initially, I was going to get HuniePop through Steam but before I clicked on the Add to Cart button, I found out they had an uncensored version available through the game’s official website. So, for the sake of getting the complete experience, I decided to get the uncensored version… for the review… not for the nakedness and the sex. Yeah.

I put the black bar up myself!

However, I don’t see how the core gameplay would change regarding if you got the censored or the uncensored versions. From what I know, the only thing you get with the uncensored version of HuniePop are some additional images of the girls after a successful sleepover. You’ll still get all of the girls and all of the locations and dialog options are still going to be available. So, if you’re really in it for just the game, you’re going to be okay with the “clean” version. But be warned: even the censored version has some pretty raunchy images!

There are three hidden characters not pictured here.

Essentially, once you meet any of them, you’re given the option to ask them some really shallow questions about themselves, such as their height, weight, favorite color, their job and, most importantly, their cup size. I’m really amazed that they aren’t offended by the last one. Anyway. once you get this information, they’ll quiz you regarding them at random. If you get them right, you’ll get Hunie, which will enable you to increase your stats for the dates. Sometimes, they’ll ask you a random question, such as your thoughts on what you’d do if you catch her with another guy. You then try to guess what they want to hear instead of giving your real opinion.

Getting these questions wrong results in… nothing. The girl will be kind of disappointed but there will be no detrimental effects, such as a lower affection meter or the amount of Hunie you have reduced. Honestly, this is the most disappointing part of HuniePop. Your progress with a girl can never get stunted and you’re never punished for getting a question wrong. Essentially, there is no downside to getting any of the questions wrong and this pretty much kills the challenge. 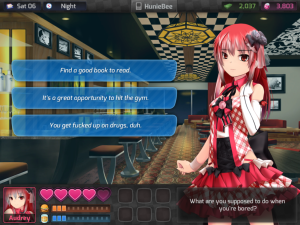 In reality, I’m straight-edge for life!

Oh, and since you basically lie regarding the random questions, it’s like your only goal is to bed these ladies instead of trying to build a relationship with them. While we’re on the topic of relationships, at the start of the game, it seems like all the girls you meet are connected to each other in one way or another.

For example, I didn’t realize that Tiffany is actually Jessie’s daughter until way late in the game! But this is never really given any importance as each girl don’t talk to each other after your initial encounter with them. It would have been great if you catch some of the girls together and try to weasel your way out of how you’re actually trying to bang the other girl! 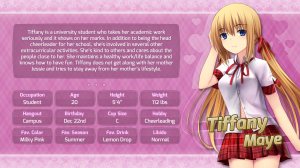 I banged your mom. You okay with that?

While the dating and RPG elements are disappointing, the game really excels in everything else. The actual date is actually the puzzle aspect of the game. Essentially, it’s one of those Match-3 games like Bejeweled or Candy Crush. However, instead of just being able to move an object to an adjacent square, you’re free to transfer it throughout the entire row/column! This is pretty ingenious as you never really feel cheated because you got the wrong tokens! Anyway, you have to gain enough Affection by matching the tokens before you run out of moves.

There’s also a lot of strategy regarding the puzzles. You have to increase your Passion meter by matching the pink heart tokens. This will increase the score multiplier for each successful match. You also have to match the Sentiment tokens (represented by the tear drop tokens) that will enable you to give your date various gifts you earn. Think of the gifts as power-ups. You also have to avoid matching the broken heart tokens as they drain your Affection meter. You also have to be aware that each girl has a different trait which are represented by the various items on the puzzle grid. There’s a lot to wrap your head around, which makes this simple Match-3 game much more complex… and more fun!

Besides the puzzles, the overall presentation of the game is brilliant. From the hand-drawn pics of the girls, to the overall interface as well as the sound design, HuniePop is just fantastic. The girls are drawn with really well and easy to distinguish from each other. Aside from a couple of sub-par photographs, the characters looks great. The overall interface is very clean and intuitive except for the option to throw away gifts. It took me a while to figure that out since the “trash can” option doesn’t appear until you’ve selected an item.

HuniePop definitely excels in sound design. The voice acting is superb and the dialog is hilarious! Kyu definitely left an impression on me as she probably has the funniest lines in the game. It also helps that her voice actress makes her sound really natural when she delivers these lines. While the voice acting is really good, I have to say the music is much better! Some of the songs, such as the Ice Rink theme is just brilliant! Hey, Kyu said it’s the best song in the game’s soundtrack and I have to agree with her there!

It is a tad disappointing that there is no real ending to the game. Once you’ve had sex with every girl in the game, including the “final boss,” Kyu will just say she can switch to Alpha Mode. This just means she’s turning on Hard mode forever! I do wish there was a way to actually build a relationship and live happily every after with one of them (my pick is either Kyu, Audrey or Tiffany). Maybe in the sequel?

Overall, I’m very pleased with HuniePop. The puzzle game aspect and the overall presentation is just a dream. Hopefully, they make a HuniePop 2 and make the entire story aspect a little bit deeper and more engaging. But, right now, I’m busy with Alpha Mode and still having a blast with the puzzle/date game. A really good purchase, in my opinion.

Are there other games like HuniePop you want to recommend? Let me know what they are in the comments section below!