In the Christian/Catholic world, last week was Holy Week in the Philippines. It’s supposed to be the week when Jesus enters the city of Jerusalem, celebrates the Last Supper, gets captured by the Romans, is tried for challenging the social order, scourged and crucified on Good Friday. It’s supposed to be a time for reflection for the Christian community and to reflect on their lives.

Or take a week long holiday to go to the beach. booze it up and party! To each his own, I guess. 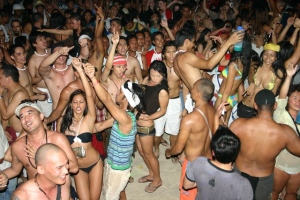 It’s a very religious time in the Philippines.

Now, as I’m not a particularly religious person, I don’t have a problem with how people spend the holidays. But, being the introverted, alcohol allergic, pale geek that I am, it’s safe to say I’m not the target for all of these festivities. Rather, I use Holy Week as a way to “experiment” on my body. And, this year, I’m going to try eating no meat products. That means no beef, chicken or pork. That also means no eggs (they should’ve become chickens) and no cheese (comes from milk, which comes from cows). Yep, no animal products; I was going pure vegan this year!

This isn’t my first time dabbling in veganism; this is actually my 3rd year of attempting being a vegan. But it was going to be different this year. This year, I was going to be a vegan for one entire week! That may not seem like a long time but, for a person who lives in the Philippines, a 3rd world country, it’s much more difficult than it seems. It’s much easier just going without animal based products for 3 days, which is what I’ve done in the past. But since I was going vegan for a full 7 day stretch, it was definitely a bit more challenging…

A couple of days before Palm Sunday, I went to the grocery to get some supplies. Like last year, I tried looking for vegan burger patties. This was supposed to be my main source of “meat” for the entire week. I managed to survive 3 days of just eating them last year. But this year, I was out of luck. There were no vegan burger patties available anywhere! I went to Healthy Options (a store that used to carry it) and even S&R (a supermarket that sells imported goods). Alas, they were no where to be found. That’s one problem of being a vegan in a third world country: there’s just no market for it! This meant I had to be more creative this year.

Not available in the Philippines!

While I was in Healthy Options, I still bought a good number of stuff. First I got some whole wheat spaghetti, soy milk and vegetable broth (both the bouillon cubes and the pre-made one). I also got Bob’s Red Mill Vegi Soup Mix to go with the vegetable soup. This would be enough for maybe 2-3 days. But I still needed more groceries so I went to the local supermarket and got some organic carrots, organic tomatoes, organic cabbage and organic potatoes. Hey, I’m going vegan anyway; I may as well go the organic route as well!

During my first 1st day, I stayed at home and prepared a good couple of meals that would last me for the next three days. I prepped the Vegi Soup mix with the bouillon vegetable soup in a slow cooker and just let it simmer until dinner. That was easy! For breakfast, I just had some cereal with soy milk and, for lunch, had some whole wheat spaghetti cooked in garlic and olive oil. I have to say, the Vegi Soup Mix was actually pretty damn good, especially since I cooked it for 4-5 hours in the crockpot!

Pretty tasty… if you have a good broth.

I also got a bit creative and experimented with a couple of dishes I sort of made up. I came up with my version of vegan chili. Made from beans, carrots, onions, garlic, tomato sauce and a whole mess of spices (namely, cumin, dried chili flakes, oregano and thyme), I was actually impressed with how good it came out! I also tried making some kind of stir-fry vegetable dish with diced carrots, diced potatoes, shredded cabbage, tomatoes and garbanzo beans and that came out pretty good as well!

Eating at home wasn’t going to be a problem, apparently. Sure, all that prep work of peeling, cutting and chopping can be a bitch. But I did come out of it with a deeper appreciation to all of the work that I put into the dish. The bigger issue was eating out! I’m not a fan of packing my own lunch since my work involves going to places that may not have a microwave to heat up my food! So, I usually eat out when I’m at work. And this was an incredible pain because I’m in a third world country!

You see, most restaurants here may have vegetarian alternatives. But vegan? That’s a totally different story! Most vegetarian dishes have things like cheese and milk added, which is not allowed in a vegan diet. I had to get creative once again! Luckily, I found a Mongolian bowl place where you could get all the vegetables you desire! I just didn’t opt to get any meat. The strangest place I had a vegan lunch was in, of all places, a burger joint! At Army/Navy Burgers and Burritos had a vegetarian burrito. I got that but I told them to hold the sour cream. To their credit, Army/Navy didn’t add sour cream per my request… and it was pretty good to boot!

The hardest part of being a vegan in a third world country, in my opinion, is it severely limits your snacking options! I was shocked to see that a lot of junk foods (chips and the like) had milk in them, eliminating them from my list of things I could eat! Well, that did lead me to eating a bit more healthy and cutting out most snacks during my week long vegan experiment. I also practiced reading food labels, just to make sure they didn’t have any animal products

Anyway, the week is over and I’m back to eating meat. During my “vegan week,” I dropped from 129 to 125 pounds. I don’t think the vegan diet is for me. I was also kind of hungry most of the while. It wasn’t an unbearable hunger, mind you. But the mere fact that I got “used to” being hungry means there’s something wrong with it, in my opinion. It also kind of messed me up a bit; returning to meat-eating, I’ve been having some digestion problems. Probably because my body got so used to processing “easy” foods. I have to get used to eating meat again, apparently.

I did pull out a few good lessons from the experience, such as preparing my own food and becoming more conscious of what I eat (reading the labels and whatnot). But it’s just too difficult in the Philippines! There aren’t that many restaurants that cater to that specific diet. It’s good to try it once in a while and I’ll probably do it again next year. But to become a vegan full-time… nah! It’s too much trouble for me.

Have you tried veganism, even for a little while? What was your experience like? Let me know in the comments section below.