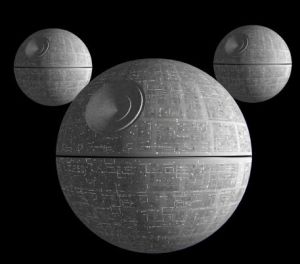 Can you spot the Hidden Mickey?

Seeing as these movies are incredibly old, there’s an entire generation (or two) that hasn’t had the pleasure of watching either the Original or Prequel trilogy films. So, the question is: what’s the best order to watch these films during a full movie marathon? Do you show it to them in the order it was released? Or chronologically? Or a totally different mix altogether? Let’s look at each of these scenarios, shall we?

1) Watching them in order of release

This would mean watching the films starting with the Original trilogy then moving on to the Prequels. Basically, you first watch Episode IV (A New Hope), then Episode V (The Empire Strikes Back) and Episode VI (Return of the Jedi). Then move to Episode I (The Phantom Menace), Episode II (Attack of The Clones) and ending with Episode III (Revenge of The Sith). After all, this is how loyal fans watched it… because we didn’t have a choice!

There are a bunch of reasons why this is a good order to follow. For one, it’s because of the technology that was used during the times the movies were film. Since the Original Trilogy was released first before The Prequels, the special effects, no matter what you say, is much better in Episodes I, II and III when you compare them with Episodes IV, V and VI. Also, it’s fun to get to know the characters first before you learn of their origins.

The problem is how it sets up Episodes I to III for failure. If you watch the films in order of release, you essentially end your movie marathon on the downer of a note that is Episode III: Revenge of the Sith. The Empire has won and the Jedi are all wiped out. The big celebration of Episode VI: Return of The Jedi happens right in the middle of your viewing! That could leave a sour note in the mouths of possible new fans.

For a nostalgic take, this is still a good way for new fans to watch the films. As long as they remember that it’ll all turn out okay chronologically (in Episode VI), it’s still a viable way to watch the Star Wars films.

2) Watching them per Episode Order

This is actually the “logical” way of watching all of the Star Wars films: go through them in the correct order! Start from Episode I and work your way up to Episode VI! Just as George Lucas intended?

Well, you do get the big happy ending at the end of your viewing experience. You also get a big benefit regarding your knowledge of Emperor Palpatine if you follow this order. If you watch the films using the Release order, you only see glimpses of the Emperor in Empire Strikes Back and are finally introduced to the character in Return of the Jedi, so you’re not really sure who this “Emperor” character here. Following this order, you see how ruthless Emperor Palpatine really is early on so (killing the Jedi by executing Order 66, manipulating Anakin, etc.). By Episodes V and VI, you really know he is the big bad guy of the films.

The biggest problem with watching it in this order is you spoil the whole “I am your father” twist in Empire Strikes Back. Yes, it’s common knowledge now but, when Episode V was released, no one saw it coming. So, if you’re planning to show it to people who have no idea about Star Wars and its history. If you have them watch the films in Episode Order, you’re depriving them getting their mind blown by the reveal!

You also spoil a lot of twists that you may not have thought about. When Luke talks about the old hermit Ben Kenobi, you immediately know he’s Obi-Wan. You know Luke and Leia are twins, which makes it immediately creepy when you see them kiss throughout the Original Trilogy.

The prequels were built from the knowledge of the events that will happen in the original trilogy. Watching the films in Episode order destroys all of the shocking elements of Episodes IV, V and VI and simply doesn’t work.

This is the one that caught my attention as you watch the films in a really weird way. The origins come from blogger Rod Hilton on his blog (which you can read here). You start off with Episodes IV and V. Then, switch to Episodes II and III, totally ignoring/skipping Episode I. Then finish off with Episode VI. This way, you see Luke’s story first then cut to Darth Vader/Anakin’s story as a flashback, then finish the entire thing off with Return of the Jedi, which closes both Luke and Anakin’s tale.

If you really need to know what happened in Episode I, you can always listen to this song anyway:

A lot! You get to preserve most of the storyline twists from both trilogies. You also get to see the parallels between Luke and Anakin (hand getting chopped off), implanting in the viewer’s mind that it’s entirely possible for Luke to join the Dark Side like his father.

You also get to skip Episode I, which doesn’t really add anything and actually causes a continuity error of sorts. In Episode IV, Obi-Wan tells Luke that The Force is all around us and binds us together. In Episode I, however, it’s “hinted” that only people with high midichlorian counts can become great Jedis.

In all seriousness, most of the problems of the Machete Order stems from skipping Episode I. In the Phantom Menace, it was already hinted that Anakin would become evil. When brought in front of the Jedi Council in Episode I, Yoda doesn’t want Anakin to be trained but Qui-Gon decides to train the boy. I actually think this was a nice touch by Lucas; Yoda already foresaw the possibility of Anakin turning to the Dark Side! You also don’t get to see the origins of other characters, like C3-P0 (created by Anakin) and R2-D2 (heroic droid), which was one of the big reasons why the Original Trilogy was created in the first place.

I think the biggest con, well, crime, would be not seeing the awesome fight between Darth Maul vs. Qui-Gon and Obi-Wan which was awesome!

Actually, this is an ingenious way of introducing the Star Wars universe to new fans! The story flows much better and you get rid of all the filler that is Episode I. You still get to see how evil the Darth Sidious/The Emperor is and Darth Vader’s fall from grace in Episode III is still fresh in your memory when you see Episode VI, making his redemption much more satisfying. Also, the problem of eliminating Episode I can easily be fixed simply by inserting it back in after watching Episode V.

Kudos to Rod Hilton of thinking this up! I have to say, if any newcomers to the Star Wars universe asks me how to watch the film, I’ll wholeheartedly suggest the Machete Order.

Now, all we have to do is wait to see if The Machete Order will still work when they release Episode VII, VIII and IX!

What’s the best order to watch the Star Wars movies in your opinion? Or do you have another wacky way of watching them like the Machete Order? Leave your ideas and comments below!