You know what video game I’ve been playing for the past week? Marvel’s Spider-Man on the PlayStation 4. This actually wasn’t a game I was all that excited when it was revealed at E3 a year ago. But my brother got the game for himself and I watched him play it and I was impressed. I decided to play it myself and I got hooked on it! This is probably the best superhero game I’ve ever experienced. I’ll even go as far as to say it’s one of the best video games, superhero or otherwise, out there right now! Everyone is heaping a lot of high praise on Insomniac Games’ latest product and it’s all well deserved.

There are some incredible surprises and great innovative gameplay and stages throughout Marvel’s Spider-Man. However, despite all of the great things it gets right, there are some things that it doesn’t, in my opinion. With that being said, here are three things I really liked juxaposed with three other things I didn’t like while playing Marvel’s Spider-Man!

By the way, I will have to go through some plot details here so… SPOILER ALERT!

Regarding the side missions…

I really liked… the Base Missions

You can’t help but think that Insomniac Games looked at the Batman: Arkham series and thought, “Hey! Let’s go do that but with Spider-Man!” while playing this game. It’s a big open world where you beat on gangs of criminals, use some rudimentary detective work and gain experience to upgrade your attacks and tools. One of the bigger things they “borrowed” from the Batman: Arkham games are the Base missions. This is where Spider-Man invades a location that’s crawling with enemies and you have to take them down using either stealth and, eventually, brute fighting power that only Spider-Man can deliver.

The base missions are very similar to the Takedown missions from the Batman: Arkham games but with a quip-regurgitating red and blue clad superhero instead of a brooding dark knight. This is also precisely why I love it! Those were my favorite missions from that other video game but Marvel’s Spider-Man add more variety by adding environmental traps and different ways to distract your foes. I have yet to really go through an entire wave of enemies without being detected; I’m not sure if that’s even possible. But when Spider-Man is detected, you get to experience the glorious combat system that Insomniac Games implemented, making this a great adrenaline rush that just can’t be beat!

but I really dislike… the Taskmaster Drone Challenges

In general, I don’t like any of the Taskmaster Challenges. They are stealth challenges (which are akin to the Base missions, which I love as stated above), beat-em-up challenges (which are just regular “beat up the thugs” missions) and drone challenges where you chase after a drone throughout the city. I don’t like them because they force you to do things as fast as possible in order to get the highest score and be rewarded with the most tokens. The last one, the Drone Challenges are the ones that irk me the most because you can’t actually follow the drone to get the best score. Rather, you have to have gone through them over and over again so you remember the path it took and be ready to go through the blue checkpoints when the pop up.

What makes it even more frustrating is that, from all of the videos I’ve seen on how to get the best score, you need to have a flawless run! You can’t skip any of the orbs or you’ll break the checkpoint combo but you can’t slow down or you’ll use up too much time. They don’t give you any leeway at all to get the best score! I know the game does an incredible job with the controls and it feels fun swinging around New York City on your webs but the Drone Challenges manage to suck out all the joy from it.

Regarding the side characters…

As far as I can tell, this version of Spider-Man is different from any other version that’s came out before. In the game, Peter Parker has already been your favorite Wall Crawler for a while now and a lot has happened in is “normal” life. He quit being a photographer for the Daily Bugle and is now working as an assistant for Otto Octavius. Norman Osborn is still the head of Oscorp but is also the mayor of New York. The biggest surprise is the direction they took Peter Parker’s significant other, Mary Jane Watson.

Here, she’s a news reporter for the Daily Bugle and a really good one at that! You even take control of her at certain points of the game where you have to sneak around and do some detective work to crack the next big story. While I generally don’t like these kinds of missions, they do work for Mary Jane here. She isn’t a damsel in distress (most of the time) and feels like she’s equal to Peter Parker on the heroism front, despite not being able to do whatever a spider can. What Insomniac Games did with Mary Jane was a simple stroke of genius that I totally approve of and is probably the most engaging version of the character… even if she rarely calls Peter “Tiger” here.

but I really dislike… Miles Morales

As much as I loved Mary Jane Watson in Marvel’s Spider-Man, I can’t say the same thing for this world’s version of Miles Morales. It’s not like there’s anything particularly wrong with the character. It’s just that he wasn’t written into the story well and he feels tacked on. He’s still an integral part in the Spider-Man lore but he just doesn’t do anything of significance to push the story forward and, because of this, I never felt any real reason to play as him when it came time to control Miles. This is possible the most painfully obvious during one of Miles Morales’ “missions” where he has to go through a Sable International checkpoint… to get to work on time.

This mission really irked me as there was totally no reason for him to do something as insane as do this! Why didn’t he just walk over to the next intersection to avoid the checkpoint? Did he really have to use a hacking app because he really, really wanted to get to FEAST in time? I guess they inserted this mission so that you can see Miles as a risk taker. But there’s a difference between being a risk taker and being reckless. I’m sorry to sound like J. Jonah Jameson but Miles Morales was being stupid because of Spider-Man at that moment!

You know this costume. It’s the one that Tony Stark gave Peter Parker at the start of Avengers: Infinity War. It was already a gorgeous costume in live action, but somehow, Insomniac Games made it even better looking in the game! There’s just something about how shiny it looks as well as how the eyeholes light up in dark environments. It’s just a stunning looking costume and this was my default costume the instant I unlocked it. 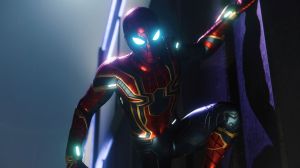 but I really disliked… Spider-Punk

What is this supposed to be? I’m not up to date with my Spider-Man history but I’m guessing this was something like a different universe and not something good ol’ Peter Parker would wear. There’s just a lot of terrible with this costume. There’s the weird spiked mohawk that serves no purpose. The studded belt that doesn’t hold anything up and I would think will get in the way of his web swinging. There’s also the denim jacket because… punk, I guess? 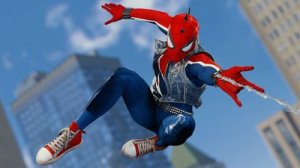 Oh, and he wear Converse. of course!

The only thing I liked about Spider-Punk is the costume power of air guitar to disable enemies. But I don’t have to equip the outfit to do that so I put the Spider-Punk outfit in the metaphorical trash bin. Now, he’s Spider-Punk no more!

No dislike here but I would be totally remiss if I didn’t mention one of the best and most surprising things I experienced while playing Marvel’s Spider-Man. A Stan Lee cameo!

This, in my opinion, is Stan Lee’s best cameo ever! It comes out of nowhere and it was implemented so slyly that I don’t think anyone expected it. Great job, Insomniac Games!

What was your favorite and least favorite parts of Marvel’s Spider-Man? Let me know in the comments section below!

2 thoughts on “Episode 273: Three Things I Liked (and Disliked) about Marvel’s Spider-Man for the PlayStation 4”