You may be wondering why this site puts the I’ll Review Anything posts right smack in the middle of the week. Specifically, the date reserved for reviews is a Thursday here in the Philippines. It may seem like an odd place to put it but there’s actually a strategic reason for this and it deals with the normal movie release schedule here. You see, unlike in the United States and other countries, new films aren’t released on a Friday or near the weekday. A movie’s first day of showing is on a Wednesday over here, right smack in the middle of the week.

This weird manner of movie scheduling figured into the scheduling of I’ll Review Anything because it allows any of us on the site to go watch the hottest new movie early in the day here in the Philippines, write up a review and schedule it to get published the next day, Thursday, a full day before the same film will be shown in other territories like the United States. This allows us to get a jump over some other bloggers around the world as we can put up our stuff a day early. Sometimes, living in a third world country pays off?

This was my general plan for Solo: A Star Wars Story last Wednesday. I had everything planned out. I would go out, have a nice lunch (which I did if you’ve read my last Burger Month review for the month) and go watch an afternoon showing of Solo to avoid the annoying loud people who watch blockbuster films that crowd the evening shows and enjoy the cool airconditioning to avoid the summer heat, go home early to beat the rush hour traffic and right up the review. But all my plans were shot down because none of the cinemas in the Philippines were showing Solo in the afternoon! No, they scheduled the film to start showing in the evening only! And this really pissed me off! 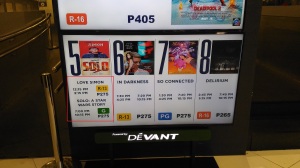 I actually was in the Ayala/Makati area because there are three movie complexes in the area on Wednesday to watch Solo. Since the area was littered with cinemas, I was confident that I could enjoy a leisurely lunch and then find a showing close by. I went online using my phone to check on the schedules but all of them were scheduled much later in the day. The earliest I saw was at 5:30 PM. That would be too late as that’s when people get off work and that would mean there would be throngs of fans then going to see Solo. As mentioned earlier, that’s something I want to avoid because of all the jerk moviegoers.

I then checked other malls in different areas and I thought I saw one that had a 3:00 PM screening at SM Megamall, one of the largest malls in the Philippines. The problem is that it was quite a ways from where I was then. Still, I was resolved to go watch Solo as, well, this was the main reason for me going out in the first place! So I went all the way to SM Megamall in the sweltering summer from Ayala. I rushed to the ticket counter and asked when the earliest showing was. They said it was the IMAX showing at 5:30 PM. I was dumbstruck! I checked my phone and, honestly, I could’ve swore they had a 3 o’clock showing but it wasn’t showing on their site anymore! This is when I gave up and decided not to watch Solo that day.

Well, it was in 3D so I would’ve passed anyway.

The reason why this angered me so much is because Solo: A Star Wars Story is the only movie I can think of that had done this in the Philippines. Despite being a third world country, the cinemas in the Philippines are usually on top of getting the latest movies. This wasn’t always the case when I was young but, in this age of globalization and Internet piracy, I guess Western movie studios wised up and decided to focus on the global market and not just their local area. I even remember we got the first Avengers movie a whole month before the United States! We may not have gotten the after credits shawarma scene but that was the only thing cut out. We got the entire movie pretty much intact.

We even have early and midnight screenings for the really huge blockbusters nowadays. I have to talk about another Avengers movie, specifically the recent Infinity War. While it didn’t get a midnight screening like a lot of the other Marvel movies, local cinemas actually had morning screenings for Avengers: Infinity War. They actually opened the movie houses as early as 7 o’clock in the morning for that film! That made a whole lot of sense as the country has a striving outsourcing industry that works the graveyard shift and this made it easier for them to go watch the film. With Solo: A Star Wars Story, the local cinemas did the opposite, opting to forego early screenings and going for late screenings only during the premiere date! What a totally boneheaded strategy for something that’s supposed to be a huge deal!

In the back of my mind, I’m not really sure if the local cinemas are to blame here. I have been avoiding reviews of Solo then so I could keep an open mind when I did review it. But since I wasn’t able to watch it, I broke down and seen a few spoiler free reviews and the general consensus is that Solo isn’t all that great. At best, it’s an average film with some good action sequences but a very uninteresting story. At it’s worst, Solo is an abomination that should be avoided.

At least it’s not as polarizing as The Last Jedi?

I think Disney, who have taken the reins of the Star Wars franchise are aware of the reaction and are trying to delay even more early reviews. I’m guessing Disney ordered the local distributors of Solo here in the Philippines to purposely delay the showing those few hours. It’s a wild conspiracy theory but it makes sense because, as I mentioned before, it’s summer break here in the country. Why would local cinemas not want extra ticket sales from the kids who are out of school and would want to watch a good movie? I do think that the local movie houses should have pushed back, though.

On a related side note, I have a huge bone to pick with the Shangri-la Mall. You see, I also went to their website to check out there screening schedule for Solo. The page said that, and I quote, “Content Update On-Going.” I took this to mean that they haven’t updated the schedule to their site yet. When I went there, I discovered the Shangri-la Mall’s cinema house was actually closed for renovation! That’s blatant false advertising because there’s no “content updating” happening because you don’t have anything to update. You just could’ve said that the cinemas were closed for renovation! Get your act together, Shangri-la Mall! 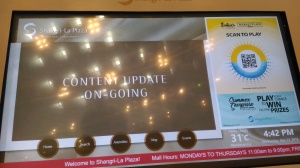 Will I eventually watch and review Solo: A Star Wars Story? I will probably go watch it and see if the negative reaction is overblown. The reviewers that I trust do say that it’s average but not terrible. I think the negative reaction is a touch excessive, as if the film has nothing good in it. But regarding reviewing it? I’m not sure as there may not be a need unless I have something unique and honest to say about it. Also, my views may be somewhat tainted by the reviews I’ve already seen. Whatever the case, if Disney is to blame for the stupid delayed screenings in the Philippines, well, that a precedent to, if this kind of thing happens in the future, I’ll know that the studio doesn’t have confidence in their own product. They should just have the guts to be upfront with what they have instead of being all deceptive with a delayed release.

Have you had any experiences with odd delayed movie screenings? Let me know in the comments section below!