The first Deadpool film was a breath of fresh air for a lot of people. We all gotten used to movies featuring superheroes to be serious affairs for the most part. Sure, we got your Guardians of the Galaxies and your Thor: Ragnaroks that did sprinkle in a lot of humor, those were still were very “serious” as the focus was more on saving the world or taking down a baddie for the sake of the world/galaxy/universe. While Deadpool had some “traditional” action scenes, it was still a funny film and we’re all expecting big things from the sequel as it does look like it retains the “soul” and fourth breaking humor that makes The Merc With A Mouth the fan favorite he is.

While most casual movie fans may say that Deadpool is a unique superhero because he’s funny and irreverent, that’s not exactly true. Deadpool is indeed funny and irreverent but he’s not the only superhero that delivers the laughs. There are a whole bunch of heroes from the Marvel and DC universes that deliver the laughs. There’s actually more than you would thing but I can name my five favorite funny superheroes from Marvel and DC right now!

You would think that Gwenpool is just a knockoff of Deadpool. She may have started out that way but she became her own character now! 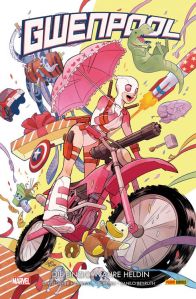 Such a cheerful background!

Gwenpool is actually Gwendoline Poole. She comes from Earth-TRN656 which, like in Earth-1218 (the “Earth” you and I are from), all superheroes are fictional and come from comic books. She was somehow transported to Earth-616, the official Marvel universe. Not willing to be an extra in the comic series, Gwen went to a costume shop to make her own outfit. The man who made the costume misread her name, thinking she wanted to be a female version of Deadpool. The guy also had an overstock of pink cloth (because there aren’t any superheroes who wear pink nowadays), which is why “Gwenpool” has a costume is essentially a pink Deadpool outfit.

Despite her being just a normal girl, Gwenpool has since learned some rudimentary fighting skills from training with Bartoc the Leaper. She’s also incredibly deadly as she has no qualms killing off people as, to her, they’re all fictional characters in a comic book. Being a huge comic book geek has served Gwenpool as well as she is familiar comic tropes. Her knowledge that she’s in the comic also gives her the ability to interact with the comic itself, such as moving between panels and touching otherwise “invisible” objects. 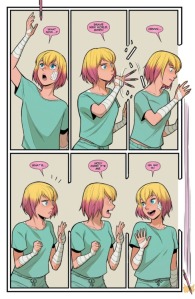 What makes Gwenpool a funny character is pretty much the same reason why Deadpool is funny. She likes to make jokes and her awareness that she’s in a comic makes a lot of her adventures a lot more lighthearted, despite all the killing she’s done.

The Main Man is hilarious… if you really like dark parody, that is. 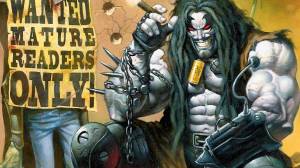 Lobo, which means “he who devours your entrails and thoroughly enjoys it” in his native language, is the last Czarnian in the DC Universe. That’s because he killed off every last one of them as a high school project, for which he gave himself a A+, of course. He tried his luck as a police officer but he couldn’t handle the strict rules and he killed his training officer. Lobo found more luck as an intergalactic bounty hunter and mercenary and this is how he gets tangled with most of his adventures, like that time he was hired to be the bodyguard of his fourth grade teacher, which got him roped into a spelling bee hosted by a group of intellectuals who wanted to exterminate the dumb people of the universe.

Like all Czarnians, Lobo has an accelerated healing factor. He can grow severed limbs and even create clones of himself from his blood. However, unlike other Czarnians, Lobo is actually immortal because the afterlife won’t have him. He’s been banned entry to heaven for obvious reasons but he cannot go to hell since Lobo beat up the demons who were supposed to torture him.

Lobo’s violent nature may not seem like a barrel of laughs on the surface but a lot of the humor derives from the fact that he’s a parody of the overly violent comic tropes from the ’90s. He’s more of a parody of Wolverine, as you can tell by his regenerative ability. Most casual fans won’t get the joke but hardcore comic book readers will dig it.

My prediction with what’s going to happen in the next Avengers film? The surviving heroes will recruit Squirrel Girl and she’ll just beat up Thanos off screen. The end. It’s not like she hadn’t done that before! 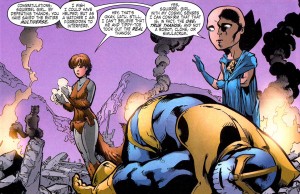 Doreen Green discovered at a young age that she had the ability to communicate with squirrels. She also started growing a tail much like that of a squirrel’s. Despite that, she isn’t technically a mutant and that her genes were just modified in some way. Her superhero outfit houses various pouches but not for her equipment. These pouches are filled with various nuts because fighting baddies is hungry work! Besides her prehensile tail and the ability to talk to squirrels, Squirrel Girl also has enhanced strength, agility and reflexes. In fact, according to her official bio on Marvel.Com, all of Squirrel Girl’s stats are maxed out, making her on the level of such beings like The Living Tribunal.

This is probably why she has managed to fought the likes of Thanos, Doctor Doom, MODOK, Fin Fang Foom and even Deadpool by herself and managed to take them all down. She is called the Unbeatable Squirrel Girl, after all. She even managed to defeat Galactus… kinda. She actually just convinced The Eater of Worlds to go to a planet filled with nuts, where they binged on nuts the entire day. This left Galactus satisfied enough that he left the Earth alone.

A lot of Squirrel Girl’s humor comes from the fact that you wouldn’t expect a character with a silly name and silly powers to manage to take out so many ultra-powerful villains. Yet, she does with just herself and her army of squirrels. Her adventures are generally funny and not to be taken all that seriously but, man! Never take her on in a fight!

Ambush Bug’s origin is kind of loopy because the character is so deranged that it’s possible that he just made it up. The “official” origin is that a scientist named Brum-El thought his planet was going to explode. He then decided to save the most precious thing he had: his laundry. He put his clothes into a rocket and sent it to Earth. There, Irwin Schwab, a man-child who was raised by a television, found one of Brum-El’s suits and put it on, becoming Ambush Bug. Side note: Brum-El’s planet didn’t explode.

Ambush Bug’s suit allows him to teleport anywhere in the world. In his earlier days, he had to use electronic bugs to send a signal to the location but, after trying to repair one of them, he accidentally causes a chain reaction that destroys all the bugs and fused the Ambush Bug costume to him permanently. This does cause two side-effects. Ambush Bug now is able to teleport without the bugs and turned his suit black, ala Spider-Man in Secret Wars. While he was originally a villain (rather, a minor annoyance) to Superman, Ambush Bug changed his ways and now fancies himself as Superman’s best friend, which is a whole lot more annoying for the Man of Steel. 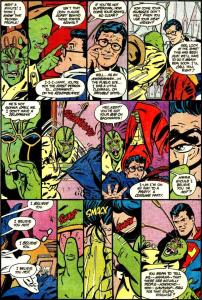 I will admit that DC’s Ambush Bug is a whole lot like Marvel’s Deadpool as he also has the ability to break the fourth wall. However, Ambush Bug was first as he was talking to the readers and getting into arguments with the narrator way back in the ’80s, a fully decade before the Merc With The Mouth started his gimmick. Ambush Bug’s adventures are a little more “family friendly” as they aren’t all that violent but they are a whole lot sillier.

Speaking of characters who were breaking the fourth wall before Deadpool, Marvel already had a character who did this: The Sensational She-Hulk. This was a thing, apparently.

She-Hulk is Jennifer Walters, Bruce Banner/The Hulk’s cousin. After being seriously injured by a gunshot, she had to get a blood transfusion and the only one with a matching blood type was Bruce Banner. This blood transfusion eventually manifested in Jennifer becoming a female version of The Hulk. Just like her cousin, She-Hulk is incredibly strong and practically invulnerable and she’s proven to be the strongest female in the Marvel universe. Unlike the Hulk, however, She-Hulk does retain most of her intelligence and personality when transformed.

However, this doesn’t explain her other ability, which she calls “comic awareness.” She never did manifest this ability until she got her own comic book series in the late ’80s. Her adventures, written and illustrated by John Byrne, were mostly satires of comic book tropes. There were a lot of times where she and her sidekick Wheezi would discuss them being in comics and why she would always be in sexy poses or jump rope in the nude. It’s because that’s what the readers wanted!

This was the entire plot of the issue? Cool!

Byrne’s run with She-Hulk was a tongue-in-cheek in-joke of comic book culture and this is what made her hilarious. Marvel has definitely downplayed She-Hulk comic awareness ability as of late since Deadpool has become their poster boy for the schtick. It’s still cool and funny but longtime readers will remember She-Hulk was first to do it in the Marvel universe on a regular basis.

We all think that Batman is the brooding vigilante that fights crime by striking fear in the hearts of criminals, right? Well, that wasn’t always the case! As silly as it seems today, there was a time when Batman was one of the silliest superheroes ever because of the ’60 television show starring Adam West. While a lot of “hardcore” Batman fans would scoff at the show’s campy style, I don’t. Because it’s awesome!

A lot of it works thanks to Adam West’s deadpan delivery of the lines and how cheesy everything felt. It was awesome but, unfortunately, I can’t really put this version of Batman as it’s technically non-canon. You would think that things like a character named Squirrel Girl defeating the Mad Titan singlehandledly would be non-canon! Maybe in the future, DC will say that the Adam West version of Batman happened for a brief time. Maybe?

Any other Marvel of DC characters you know of (besides Deadpool) who are funny? Let me know in the comments section below!