The MCU version of the Star-Lord character is currently getting a lot of hate because of what happened in Avengers: Infinity War. Don’t believe me? Well, I did a Google Search for “Star-Lord” and “Avengers Infinity War” and look at the top search results: 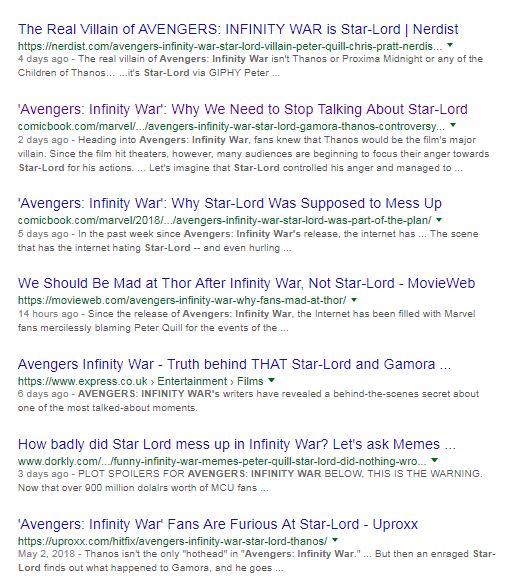 Here’s what Google has to say about Star-Lord and Avengers: Infinity War.

Before I go into details though, here’s your friendly neighborhood SPOILER WARNING – don’t read on if you have not seen Avengers: Infinity War and you don’t want any spoilers.

No no no, don’t read on if you don’t want Avengers: Infinity War spoilers.

Alright, for context (in case you don’t recall Avengers: Infinity War in detail), here’s what happened – a group consisting of Star-Lord, Drax, Mantis, Iron Man, Spider-Man, and Doctor Strange are on Thanos’ home planet Titan, waiting to ambush the big bad villain. Star-Lord has this elaborate plan to distract Thanos and keep him off-balanced, then restrain him long enough for the heroes to steal the gauntlet. And the plan almost works, with Thanos firmly restrained: Doctor Strange and Drax holding on to his right hand, Iron Man and Spider-Man pulling on the Gauntlet on his left, and Mantis on top of him keeping him in a daze.

It all falls apart when Star-Lord asks Thanos about Gamora. When he realizes that Gamora is dead and Thanos had killed her, he loses it and starts pistol-whipping Thanos right in the face. This causes Mantis to lose her hold on the big guy, which in turn makes him regain consciousness just when Spider-Man had almost slipped the Gauntlet off his hand completely. Thanos regains the Gauntlet and with the power of four Infinity Stones, he makes short work of the assembled heroes, retrieving the rest of the Infinity Stones and fulfilling his goal of wiping out half of the living beings in the universe.

Even the way I wrote that last paragraph assigns the blame on Star-Lord and I don’t think he’s free from any faults. But I don’t think he deserves all the hate that he’s been getting, and that’s what I wanted to talk about here. Now I am completely aware that I am trying to defend the actions of a fictional character in a work of fiction but there are people who do take these things a little more seriously, people who may end up boycotting the next Avengers film, the next Guardians of the Galaxy film, the rest of the MCU films, any movies done by the Russos, and so on. So I think this, ahem, “issue”, is worth discussing.

Before we condemn Star-Lord for his actions in Infinity War, let’s consider the recent events that we’ve seen. In Guardians of the Galaxy Vol. 2, Star-Lord was put through the wringer emotionally: he had finally been reunited with Ego, his real father, only to discover that (1) his father had killed his mother and (2) he only needed Star-Lord to activate all the “seedlings” that he left on other planets. Star-Lord also learned that Yondu Udonta, the Ravager captain who had taken care of him since his mother passed, kept him from his father to save his life (Ego had been killing off Star-Lord’s half siblings). He also learned what Yondu had truly felt about him (the line “He may have been your father, boy, but he wasn’t your daddy.” remains quite memorable for me), only for Yondu to get killed during the battle with Ego. So not only once, but twice, was Star-Lord given something only for it to be taken away from him shortly after.

In Avengers: Infinity War, the knowledge that Thanos was already on the move unsettled Gamora so badly, she ended up making Star-Lord swear on his mother to kill her if Thanos ever lays his hands on her. This promise is not to be taken lightly; the memory of his mother is one of the most important things to the Star-Lord character. This dreaded moment actually happens – Thanos has captured Gamora. Star-Lord struggles, but he pulls the trigger just after both he and Gamora had exchanged the words “I love you”. Again, he had been given something only for it to be taken away from him right away. 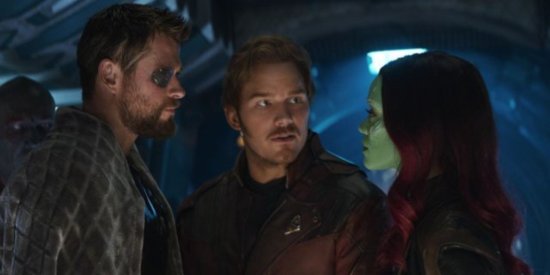 Gamora had just professed her love for Star-Lord when she was taken away by Thanos.

Unlike the previous situation though, there was still hope for Star-Lord. Gamora wasn’t dead, she was only abducted. He could still rescue her, right? I’m sure everyone would agree that that’s what Star-Lord believed, up until the point when Thanos confirmed that he had killed her. So it’s not quite understandable why Star-Lord lost it at that moment. In fact, the guy trying to calm Star-Lord down was in a similar situation recently – Iron Man stopped acting rationally when he found out that Bucky killed his parents all along:

Star-Lord losing his shit is what people do in these types of situations, so the character is just acting the way a real person could.

Not the Only One to Blame

Star-Lord’s situation to me feels like how people tend to assign blame in team sports. Let’s say you’re watching a basketball game between Team A and Team B, with the score at 99-100 in favor of Team B. Team A has possession of the ball, and their star player has it in his hands. The clock is winding down – 10, 9, 8… Team A’s star player takes the shot… and misses it. Team B wins. Did Team A’s star player lose the game for them?

Star-Lord taking the blame for Thanos’ victory feels exactly like the situation that I described above. There are multiple events, actions, decisions, leading up to that score of 99. It’s not just Team A’s star player that’s responsible for their score – it’s the whole team’s responsibility. Similarly, Star-Lord isn’t the only one at fault in all this. The heroes wouldn’t have been on Titan in the first place if Doctor Strange wasn’t so overconfident in his ability to defend the Time Stone – he got himself captured by Ebony Maw. Tony Stark thought him and his two other companions would be enough to beat Thanos, opting to battle the villain on Titan instead of reconnecting with the rest of the Avengers on Earth. Everything on Titan would have been irrelevant if Gamora had the guts to take her own life, or if the Avengers on Earth just got rid of the Mind Stone.

Thanos was able to collect all six Infinity Stones not just because Star-Lord lost his cool, but because all the other heroes decided to act in the way that they did. Star-Lord is just the easiest to blame because, like Team A’s star player, his team was about to “win the game” and he messed it up. The Avengers could have won this conflict earlier if they had made different choices.

The “Game” Ain’t Over

Here’s the thing that bothers me about all this. People are already hating on the Peter Quill character (or are accusing the Russos of character assassination) because Thanos “won”, but did he? From a storytelling perspective, we know that the war is far from over because of what Doctor Strange saw and what he told Stark. The heroes who survived the “finger snap” are down, but they’re not necessarily out – Doctor Strange himself said that “this was the only way”, we just don’t know what the “way” is at this point.

Maybe the heroes needed to fail. Maybe Thanos needed to succeed with this attempt in order for the heroes to truly win later on. Like how Boromir’s turn in The Fellowship of the Ring pushed Frodo to separate from the Fellowship and eventually led to the success of his mission, or how Cipher’s betrayal in The Matrix helped Neo realize that he was “The One” after all. Maybe Star-Lord needed to make this mistake in order for his character to grow further.

As audiences, we know that Avengers 4 is coming out next year. We know that this story will be continued. If Star-Lord hadn’t messed up, we could have been robbed of whatever amazing story Avengers 4 is going to tell. Going back to my earlier statement – Star-Lord is a fictional character. The Russos, along with Christopher Markus and Stephen McFeely, have been telling great stories since Captain America: The Winter Soldier, so we should have a little faith in what they have planned for both the Star-Lord character and for Avengers 4. So let’s ease up on the hate a little and see what’s in store for us next year, when Avengers 4 finally comes out.

Did Star-Lord’s epic failure in Avengers: Infinity War also made you hate the character? Let us know what you think by leaving a comment or two below!