Even before buying a Nintendo Switch, I knew that I would have to purchase at least one additional controller for it. Sure, the pair of JoyCon that comes with the device can work as two separate controllers, but I couldn’t see myself using them as the primary means of playing two-player games. And I was guaranteed to play two-player games – while not a hardcore gamer, my fiancee does enjoy playing certain video games every now and then. I wanted the Nintendo Switch to be a part of our regular activities.

But Nintendo’s official Pro Controller (priced at $69.99) is quite expensive for someone who just shelled out around $600 for the Switch, several games, and a 200 GB micro SD card. I needed a cheaper alternative. The first controller that I laid my eyes on that seemed to be able to fit my needs was 8Bitdo’s FC30 Pro Controller, and that’s what I’ll be reviewing today. With this in mind, please note that I am reviewing the FC30 Pro primarily as a Switch controller even though it also works with other devices. Also, 8Bitdo released the NES30 Pro Controller – it’s almost the same as the FC30 Pro, but drawing inspiration from Nintendo’s NES Controller instead of the Famicom. So everything that I say here about the FC30 Pro except for it’s looks should apply to the NES30 Pro.

The first thing about the FC30 Pro that caught my eye was it’s price; where I am, I was able to get the FC30 Pro at around $39 – almost half the price of the Nintendo Switch Pro Controller. In the box, the FC30 Pro comes with a micro USB cable for charging and a small metal keychain. I opted for the FC30 instead of the NES30 simply because living in an Asian country, I grew up with the Famicom and am more familiar with it’s red and gold color scheme. 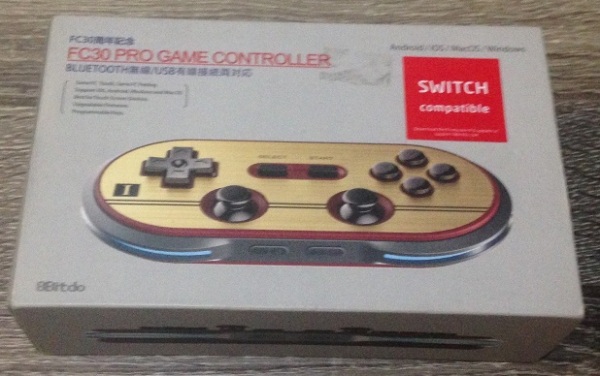 The FC30 Pro comes in a neat little box, complete with a “SWITCH compatible” sticker.

The FC30 Pro is quite small – just a little bigger than the JoyCon, which may turn off folks with large hands. It is also very light, which makes it a good controller for travelling. And it is designed similar to how older controllers were back in the 8-bit/16-bit era: flat with no grips. Don’t let it’s small size or light weight fool you – every component of the FC30 Pro is made with good quality plastic and does not feel cheap.

In terms of buttons, the FC30 Pro has almost everything that you need for the Nintendo Switch: four face buttons, four shouder buttons, a D-Pad, two clickable analog sticks, and two buttons that can function as the Home and screenshot buttons of the Switch JoyCon/Pro Controller so it should work with most Switch games. 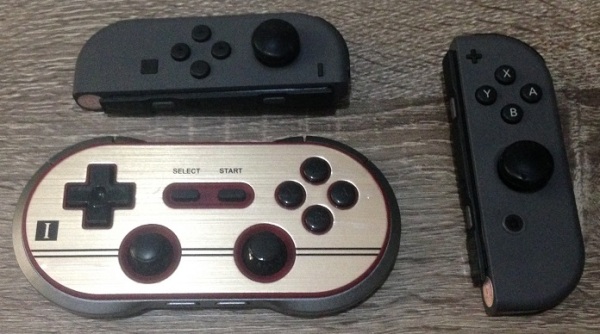 Comparison of the FC30 and the standard Switch JoyCon.

What it doesn’t have are the following: no rumble features, no motion/gyro controls, no dedicated sync button (for pairing), no NFC reader (for use with amiibo and similar technology), and no IR sensor. The FC30 also does not have the 4 LED indicators that Switch controllers have; in it’s place are two long LED strips running along each side of the FC30. So it seems that the FC30 is missing a lot, but very few of the Switch games that I own require the use of these features.

In terms of function, the FC30 Pro Controller works well enough but it has issues. The D-Pad is excellent, as are the face buttons but due to it’s small size, the face buttons are barely larger than the face buttons of the JoyCon – not that big of a deal for me but can be an issue for others. The analog sticks are also quite small, and while they were decent for most of my experience with them, we experienced some issues with precision when playing high stress games like Overcooked or Doom. I think the time pressure in those games, combined with the small analog sticks and the way they’re situated on the controller resulted in incorrect inputs – us accidentally doing diagonals, and the like.

Another issue that I had with the FC30 Pro involves the shoulder buttons. While it’s quite ingenious to fit two shoulder buttons on each side by having them beside each other, I had trouble remembering which button should be for L (L1) and which is ZL (L2). And even after getting used to it, I’d have to either stretch my forefingers all the way to the middle to reach L2/R2, and bend it almost fully to press L1/R1. I never got comfortable with this layout when playing games like twin-stick shooters (Enter the Gungeon) that relied heavily on the shoulder buttons. 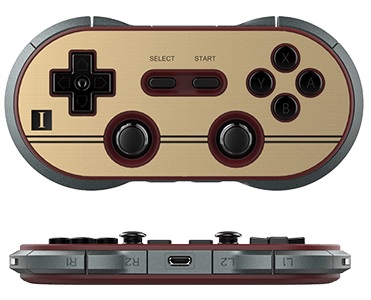 The layout of the L1/L2 and R1/R2 buttons never really grew on me.

Also, I have a complaint about the FC30 Pro and it concerns it’s LED indicators. They look neat but annoyed me whenever I charged the FC30 – they were simply too bright, I had to cover the FC30 with something when charging it at night. It’s easy enough to memorize what the colors of the LEDs stand for, as well as it’s flashing patterns, but it fails to replicate a somewhat important feature of Switch controllers: being able to indicate which “player” the FC30 is being recognized as (only relevant when playing with more than two players).

These LEDs along the side of the FC30 were annoyingly bright while charging.

Lastly, I did run into issues pairing the FC30 Pro with the Nintendo Switch. Sometimes, but not often, the Switch fails to recognize the FC30 Pro and I would need to restart the Switch in order for the FC30 Pro to work with it. It doesn’t happen that often to be a deal breaker, but when it happens it can be really annoying especially when I’m playing in docked mode as I’d have to walk all the way to the docked Switch just to restart it.

That seems like a lot of negatives, so let me go back to some positives. I never had issues with the FC30’s battery life, and once paired the FC30 Pro stayed connected. I did not experience any discernible input lags which is very important. And due to its size, it was very convenient for me to carry the FC30 Pro along while travelling.

It’s hard for me to say this because I really like the FC30 Pro a lot, but I can’t really recommend it as an alternative to the Switch Pro Controller. The FC30 Pro’s issues, while not game breaking, left me wanting a better option. I would only recommend the FC30 Pro under the following circumstances:

The FC30 Pro did what I needed it to do when I bought it – it was a second controller that allowed me and my fiancee to play together on the Nintendo Switch. I don’t regret buying the FC30 but I eventually moved on to other options, keeping the FC30 Pro as a fourth controller in case we have guests or as a back up if I need to charge my other controllers. The FC30 is not a bad controller, in fact it is actually quite good despite it’s flaws; there are just better options out there that would give you more bang for your buck.