It’s been a while since I’ve played Street Fighter V. While I do love most of the improvements Capcom has done with the game, especially since upgrading to Arcade Edition, I just haven’t found the time to play nor the energy to really focus because of a sudden hectic schedule. But this Tuesday, I decided I needed to put aside some time and schedule a few hours a day with the game. Why? Because this Tuesday was the day when Blanka became available in Street Fighter V!

Blanka was one of the first characters that I actually practiced way, way back when I started playing Street Fighter IV. I felt he was a fun character to choose all the time as he was easy to pick up, his specials were charge motions (which is what I could only do consistently before) and I loved his beastly look. I did settle down with Vega/Claw eventually but there were some times I would look back at Blanka because he was, for me anyway, an easy character to control. Of course, I didn’t know at the time all the hate the character got because of all the shenanigans he could pull off. Come to think of it, this was probably another factor that made him so fun to play!

Anyway, I was excited to see Blanka return in Street Fighter V. I really hoped that they didn’t mess around with him too much and, from the move list Capcom put out, it looked like they didn’t. The green fuzzball was still going to be a charge motion character when it came to executing all his rolling attacks. You still activated his electricity by mashing the punch buttons. You can still surprise your opponent with a quick hop forward or backwards. He still has his punching slide attack (my favorite attack, actually) that can go under projectiles to sweep characters. But Capcom gave him some extra moves, such as a Target Combo, follow up attacks from his Coward Crouch. They even gave him a kind of command grab! Neat! 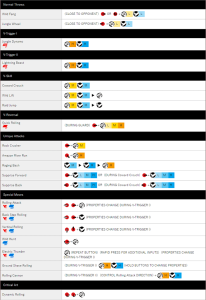 All the joys of reading a manual!

I will say I was extremely excited to play as Blanka and I was even considering switching from Vega to him as, while I do enjoy playing as the narcissistic claw-wielding Spanish ninja, it just takes so much effort to do damage with him! If Blanka played like he did in Street Fighter IV, I should be able to make the transition to him quickly and painlessly. Unfortunately, this doesn’t seem to be the case. The biggest reason for this are his normal attacks.

Blanka’s normals are kind of weird in Street Fighter V. They kind of feel slow and clunky but they have some surprising range to them. His medium attacks are really exceptional as they can hit from quite a distance away. His standing medium punch looks like a great poking tool and looks like his longest reaching attack. His crouching medium punch now moves in an upwards direction, making it a great anti-air tool if you don’t have any charge for the vertical rolling attack. It can even strike down cross up attacks cleanly with the proper timing. His standing medium kick is a double knee strike that moves Blanka forward, making it a new way for him to move towards his opponent a little bit while still maintaining a backwards charge. Blanka’s main low attack will still be his crouching medium kick as you can still link it to standing or crouching light punch (another poking tool but with less range but much faster than his medium punch) and/or a rolling attack.

All of his medium attacks are great as they have some range and they seem like they’re all safe on block. However, there is a problem with them: they recover rather slowly. This does make them easier to punish on whiff. It also feels awkward to link attacks together because of this delay when you can initiate the next attack. It will take some getting used to but it does make Blanka feel sluggish, which is totally strange for his character archetype. You can still do damage with him but the timing does feel very different from most of the other characters in Street Fighter V’s roster.

Capcom also mucked around with Blanka’s special attacks, making the former shenanigan tactics he was able to do before impossible. One of the things that made Blanka a nightmare to play against was his ability to cross up opponents with his regular Back Step Rolling AKA Rainbow Ball and his Rolling Attack AKA Horizonal Blanka Ball while they were getting up. This doesn’t seem possible anymore as the opponent is always going to be pushed into a position where it doesn’t work. It still can be done with his first V-Trigger but don’t expect to do those shenanigans otherwise. He still does his Surprise Forward and Backward command dashes and they’re probably the only real tricky moves that retain their properties. You can still cancel them out of some normals, which is great for catching opponents off guard. The forward version still goes through opponents, making it a great way to cross up your opponent while on the ground.

They did buff out his other special attacks, however. His Coward Crouch is now his V-Skill. He can still use this move to dodge projectiles but Blanka how has two moves from this. Pressing the punch button from the Coward Crouch makes him do an upwards swipe that launches the opponent in the air, leading to follow up attacks. You can even combo this from a standing heavy punch, making this probably part of his new bread and button combo. Pressing the kick button has Blanka jump forward in the air. This is okay but doesn’t seem as useful as the punch follow up. Besides, why use this when you can use the Amazon River Run AKA Slide Attack if you want to punish opponents who are throwing projectiles within jump in range. His electricity seems much easier to execute now, as if Capcom reduced the number of button presses to execute the attack. This can be a good thing, as it’s much easier to combo into electricity now, or a bad thing, as the electricity may come out by accident.

They also made some welcome changes to his vertical rolling attack. You can now control the angle of the attack depending on what kick button you press. If the opponent tries to jump away, you can actually nail them with the light version while characters trying to cross Blanka up can be hit straight up with the heavy kick version. His new command grab, called Wild Hunt, is pretty neat as you can jump over low attack and even use the EX version to get over projectiles. The biggest problem of the command grab is it comes out rather slow and opponents who are ready for this attack will punish you hard.

His V-Triggers do seem really good but for different reasons. They’re both install V-Triggers and they have different properties. His first V-Trigger, Jungle Dynamo, powers up all his rolling attacks and his electricity special. You can now juggle your opponent when you connect with any of them with the right timing. Also, his regular Blanka Ball becomes projectile invincible while his Rainbow Ball can now cross up. He also gets access to his Super Combo, the Ground Shave Roll, if you press/hold down both heavy attacks. Blanka’s second V-Trigger, Lightning Beast, turns him into a giant pinball of sorts. If Blanka hits his opponent with any of his rolling attacks, he can perform a follow up attack by pressing the heavy attack buttons. You can direct the follow up attack with the directional pad/joystick. If you’ve use Storm’s Lightning Attack or Wolverine’s Drill Claw from the Marvel vs. Capcom series, you have the general idea on how this works.

Both his V-Triggers seem matchup dependent. Against projectile chuckers, you’re better off with the first V-Trigger. If you want to be a little more tricky and zoom around the screen, the second V-Trigger is the one you might wanna pick. You do have to be rather precise with the timing with each V-Trigger as the margin of error for follow ups seems very narrow. It’s much easier to whiff with any of them, which can lead to a devastating punish.

I will say I’m rather disappointed with his new Critical Art. It’s a swipe that will lead into an auto-combo for massive damage. You can actually hit airborne opponents with it and it seems to have a decent amount of invincibility. The problem is it’s like a lot of other auto-combo Critical Arts in the game. It’s just not creative. Also, it uses two quarter circle motions. Most people might prefer this but, since Blanka is a charge motion character, it just makes more sense for him to have a charge motion Critical Art as well.

Is Blanka a good character? I think he’s decent but Capcom really hurt him by removing a lot of his tricks and shenanigans. He plays more straightforward because of this, which really seems odd. He does still have a lot of tools to make him viable but I think he doesn’t feel like the green fuzzball that enamored him to me anymore. You have to be a little more technically sound with him this time around. Honestly, if you’re going to pick a character that uses charge motions and launches himself into opponents to hurt them, you may as well use Urien. 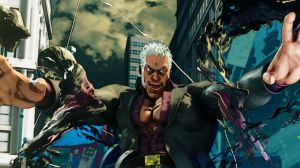 What do you think of Blanka in Street Fighter V? Let me know in the comments section below!