One of my first memories is my uncle giving me an old Pong console. Well, technically, we borrowed it but we never gave it back. Since then, I’ve had at least one game console for almost every video game “generation” there’s been. I’ve had an Atari 2600, a FamiCom (NES to you Westerners out there) and the original gray Sony PlayStation as gifts for birthdays and/or Christmas. I also got a PlayStation 2, Gamecube, Xbox and Dreamcast (which is the first consoles I purchased with my own money). I eventually got myself a PlayStation 3 and PlayStation 4 as well.

If you look closely at that list, you’ve probably noticed a gap as I didn’t mention what 16-bit console I had. Truthfully, I didn’t get one. While Nintendo and Sega were trying to outdo each other with their 16-bit consoles, I was strangely satisfied with my FamiCom and XT PC. I still got to play on those consoles when I went to either my friends or cousin’s home but I guess there’s always been a weird hole in my heart that I never got a console from that generation.

Well, that hole did get filled earlier this year as I got my hands on the Super Nintendo Classic!

The Super Nintendo Classic (AKA SNES Classic AKA SNES Mini) is a follow-up to Nintendo’s NES Classic retro gaming console. Like the NES Classic, the SNES Classic is a nifty little piece of hardware that looks like the original Super Nintendo video game console but made teeny tiny and made to work for modern televisions. Honestly, it’s its really small size that will really catch your attention. It’s actually way smaller than I thought it would be but its small size makes it incredibly easy to find a place for it near your TV.

The SNES Classic also shows that Nintendo learned a lot of lessons since putting out the NES Classic, particularly with the controllers. Remember the ridiculously small controllers and short cables the NES Classic’s single controller had? Nintendo rightfully decided to package the SNES Classic with two controllers by default. Not only that, they’re practically the same size as the original SNES controllers back in the day, making them comfortable to handle for the most part. There are a few niggling differences. The texture that comes bundled with the SNES Classic feels slightly more rough but not in a bad way. While the buttons do feel responsive, it feels difficult to get the D-Pad to do diagonal movements. This could just be me getting used to modern controllers but I just don’t remember having this problem with the original SNES D-Pad.

Another problem I have with the controllers is mostly an aesthetic issue but an issue nonetheless. The SNES Classic uses the Wii controller ports instead of the old plastic rectangle the original 16-bit system had. But, if you look at the unit itself, you won’t notice a Wii controller port. That’s because the ports are hidden behind at panel at the front of the SNES Classic. You have to pop it open to reveal them. I honestly think it would’ve been better if the panel wasn’t there at all or if Nintendo designed it so that each port had its own panel you popped open.

Selecting each and every game is intuitive. When you boot up the console, you’ll be taken to an easy to navigate menu of the games in the middle of the screen. You can make some adjustments to how the game is displayed on your TV as well, such as changing the backgrounds and borders of the screen or if you want the system to duplicate how the game looked way back when on a CRT TV.  Also, the music that plays in the background is actually a nice little ditty that I can’t believe wasn’t in an old-school 16-bit game before!

I do have a few gripes with some of the user interface decisions of the SNES Classic. For one, there’s an icon that says “manuals” but the manual aren’t there. Instead, the screen will show you a QR-Code and you’ll need to use your smart device to view the manuals. I think that’s pretty lazy, Nintendo! I mean, it should’ve been easy to insert the manuals in the system, right? Also, I do wish there was a way to fill the entire screen with the game instead of using the borders. Look, I know that games were played in 4:3 then so the SNES Classic is just emulating that. But we do have the technology to do that so I would like to, at the least, have the option.

When did Star Fox 2 come out?

Nintendo did an admirable job of selecting some of the cream of the crop of games that came out for their 16-bit console. There was a reason why Nintendo’s original SNES was a hit and that’s because most of the games were great and it’s fantastic to be able to play them again, even if it is on a replica controller. At least the “replica” is an official Nintendo product, right? And most of those fantastic games are right in the SNES Classic. In fact, I bet the folks over at Nintendo had to get into arguments regarding what games would be part of this exclusive 21 roster of games. Games like Super Mario World, Super Metroid and The Legend of Zelda: A Link to the Past had to be on the SNES Classic for sure. But Nintendo were wise enough to include Final Fantasy III (which is actually Final Fantasy VI… long story), Donkey Kong Country, Earthbound, Super Punch-Out and Star Fox as well. 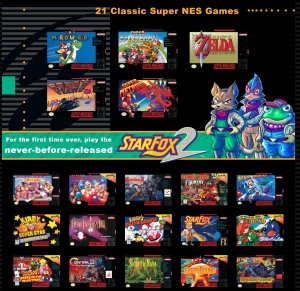 “Why isn’t [INSERT NAME OF GAME HERE] on this list?”

I do find it odd that there is a stunning lack of 2-player games on the SNES Classic. Sure, there’s Mario Kart, Street Fighter II: Hyper Fighting and F-Zero. And I’ll be generous and even include Secret of Mana and Final Fantasy III because their “2-player” mode is stretching the definition rather thin. But, besides, Contra III: The Alien Wars, there isn’t a game on the SNES Classic where you can play cooperatively with another player. It’s not like the original SNES was lacking in 2-player co-op games as this was the console that had games like Final Fight, Teenage Mutant Ninja Turtles IV: Turtles in Time, Smash TV and Captain Commando. Honestly, I would’ve traded Kirby Dream Course and even Mega Man X for any of these games just to get more co-op games on the SNES Classic… and I positively love Mega Man X!

Even with all of the issues that I mentioned, those are just minor nitpicks compared to how great the SNES Classic really is. It’s a great buy for those who love classic gaming and, if you felt you missed out on the 16-bit era (like myself), you owe it to yourself to get one.

What do you think of the SNES Classic? Let me know in the comments section below!