Blade Runner 2049 never even tries to address the question because it’s supposed to be one of the greatest mysteries of geekdom and answering it would be spoiling the fun of trying to answer it. However, the new Blade Runner film does raise a few questions itself. None of them are as huge as the “is Deckard a replicant” question. Frankly, these are a mixed bag of silly and poignant questions that popped into my mind while watching the film.

By the way, SPOILERS AHEAD!

1. Where are the nine off-world colonies?

This is actually something that was mentioned in the original Blade Runner film but it was raised in the latest film as well. While most people may question the situation and the living conditions of these off-world colonies, I actually want to know where the nine off-world colonies are located.

In the film, Wallace, the guy that owns the monopoly of replicant manufacturing in the universe of Blade Runner 2049, mentions that there are nine off-world colonies now. However, both the original film and its sequel never specifically mentions where they’re located. The films and the shorts have mentioned some locations, though. Roy Batty mentions seeing ships on fire “on the shoulder of Orion,” which probably means the Orion constellation. The replicant also mentions Tannhäuser Gate, some unknown location. In the short Blackout: 2022, which details the replicant revolt and the Blackout that scrubbed most electronic data from the world, the replicant Iggy mentions he fought on the fields of Kalathania but never mentions if it’s the name of the planet of a tract of land on a planet.

I would love to know where the nine off-world colonies are as it would tell us how far we’ve gone in the universe. I’m guessing they’ve already colonized Mars but, if what Roy Batty says about being in the Orion cluster, that means we’ve already gone further than our solar system! If that’s the case, how? Did we find a wormhole that leads to distant galaxies? Is faster-than-light travel possible in 2019 (the setting of the original Blade Runner)? So many questions!

2. What happened to Decard’s dog?

During the latter part of Blade Runner 2049, the replicant K tracks down Deckard (still played by Harrison Ford) to the irradiated Las Vegas. He does find the aged Blade Runner but he has someone else with him: a black dog.

Anyway, a group of soldiers from the Wallace Corporation and led by the replicant Luv, charge in and blow up the hotel they’re hiding in. Luv captures Deckard, destroy Joi’s emitter and leave K for dead. The new Blade Runner is rescued by the replicant resistance soon after, though and K realizes who Deckard’s kid is soon afterwards. But what happens to the dog? You never see the dog after K is saved. I mean, did the replicant resistance leave him back in Las Vegas? Did they bring him back to their hideout? Did they eat him?

No, seriously. Did the replicant resistance eat the dog? I actually did some research to see if there was an answer to what happened to Deckard’s dog and I came across a post saying that he thinks they ate the dog! What the hell, replicant resistance!

You gotta hand it to the visuals of the movie. The world of Blade Runner 2049 definitely looks great and sets up the cyberpunk atmosphere really well. One of the things that really helps it out are the holographic billboards. The one that really stuck out for me was the Joi hologram that talks to K, now calling himself Joe, interacts with him. It really stuck out for me because Joi was nude in the ad! 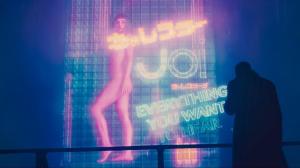 Look at that super strategic placement of that Japanese text!

The pic above is actually really kind of mild as you do get to see Joi’s naked upper body a few seconds after this. I’m guessing K/Joe and the people who were looking at the same advertisement also saw the naked lower half as well. So, are naked ads legal in the future? I mean, I’m guessing there are still kids walking the streets of LA in 2049, even at night. The short 2048: Nowhere to Run actually shows Sapper Morton talking to and giving a book to a kid. So, she also got to see Joi in the buff as well?

The main plot thread of Blade Runner 2049 is the revelation that Rachael, the replicant that runs off with Deckard in the first film, can actually get pregnant. This revelation sets off a chain of events that leads to K/Joe searching for Deckard and Wallace and his company in close pursuit. Wallace wants to use the “technology” so that he can make more replicants quicker and to conquer the stars or something along those lines. That’s what he says anyway.

But is that really a sound plan? Wouldn’t making replicants in a factory be cheaper than having a herd of female replicants give birth? I mean, the entire process of rearing a child into adulthood is really expensive! During the pregnancy, you gotta make sure the replicant mother carry the child is healthy throughout the assumed nine month term, so there’s making sure they’re healthy for those nine months. Then there’s the actual raising of the child until they reach adulthood. That means feeding and educating the little baby replicants for at least 18 years. I guess the Wallace Corproation won’t have to implant memories anymore but I would think cramming in fake memories in a replicant would be cheaper than raising them for almost two decades! Wallace already churns out replicants in their adulthood and is totally okay with just killing them if they don’t hold up! Isn’t that a sign of how cheap he can make them? 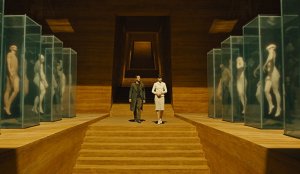 No colored replicants on sale?

Not only that, if your sole supply of replicants is based on them being born naturally, wouldn’t they also be prone to more defects? There’s going to be the issue of birth defects and you gotta make sure that they don’t accidentally hurt themselves while they grow up into adulthood. Also, what if there are complications with the birth? Remember, it was determined that Rachael died giving birth to her child. In the long run, I would think assembling replicants in a sterile factory setting would be more efficient because of all the things that can go wrong with actually rearing a baby replicant. So, why would Wallace want this overly complicated process of giving working reproductive organs to replicants?

5. Is Wallace a replicant?

I am kind of amazed that not many people think that Wallace may actually be a replicant himself. Although there aren’t any hints in Blade Runner 2049 that actually suggest this, there was something that caught my eye… it was Wallace’s blindness.

The original film and its sequel put a lot of emphasis on the eyes. In Blade Runner 2049, all replicants now have some sort of label or marking on the bottom part of their eyeballs so they’re easily identifiable. In the first Blade Runner, it wasn’t that easy, though. They had to go through the Voight-Kampff tests, which Blade Runners can use to check if a subject is a replicant or not by scanning their irises while asking them a series of questions. It’s also shown to the viewers that, under the right kind of light, replicant eyes will glow a yellowish hue. 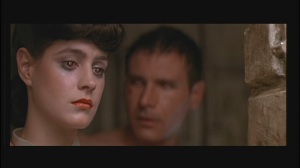 Do I see a hint of yellow in Deckard’s eyes?

Niander Wallace eyes? They’re a constant pale white because of his “affliction” as he calls it in the 2036: Nexus Dawn short. It’s kind of weird actually because I can’t recall any person, human or replicant, having any kind of disability. Okay, maybe he “blinded” himself intentionally so that he can use those little robot drones to see for him as seen in the film. But what if he did it so that the Voight-Kampff wouldn’t work on him anymore? There wouldn’t be any records of him being a replicant because of the Blackout of 2022.

“But if Wallace is a replicant, why would he want to enslave replicants?” you would ask. You have to remember that he successfully petitioned the repeal of the replicant prohibition. He actually made it possible for other replicants to be made again, so you can say that he’s actually resurrected the entire replicant population. Also, if you’re in the camp that thinks Deckard is a replicant, then why doesn’t Deckard know he’s a replicant? That would also mean that Wallace may not even know he’s a replicant himself. In fact, Wallace could actually me mimicking Eldon Tyrell, the head of the Tyrell Corporation, at the time of his murder by Roy Batty… because the replicant clawed Tyrell’s eyes out. It would make sense that Tyrell, who already created Rachael (and possibly Deckard) also created a third advanced replicant who eventually became Wallace.

Of course, I could be totally off base here. After all, it’s just a question that popped in my head.

Are there any other questions you thought of after watching Blade Runner 2049? Let me know in the comments section below!